“The Taming of the Shrew” in Holmdel

I have long admired Holmdel Theatre Company for their commitment to out-of-the-mainstream plays (Two Gentlemen of Verona in 1993 and Arcadia in ’97 for two) and for their willingness to innovate (the more recent Noises Off and Our Town, for example). Their inclusion of high school students, effective in last year’s Godspell, is admirable as well.

Their current show, The Taming of the Shrew, is another worthy selection, but the production falls short. There are some bright spots, but under the direction of Tom Frascatore, it doesn’t jell. Missteps skew the text, the comedy, the relationships, the tone of the whole play.

Sweet Bianca is up to her bodice in suitors, but older sister Katherine’s shrewish ways point to spinsterhood – for both of them. Who should appear but the dashing Petruchio, who comes to “wive it wealthily in Padua.” With the promise of a substantial dowry, Petruchio sets about wooing Kate, marrying her, and by variously isolating, starving and taunting her, changes her from ‘Kate the curst’ to ‘super-dainty Kate’. 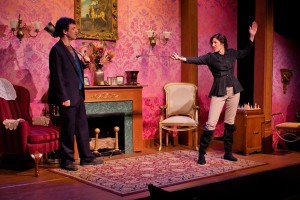 David Murray and Lauren Valasa as Petruchio and Katherine

That Shrew is a controversial play about the sexual politics of courtship and marriage is, by now, old news. So is the idea that a younger sister cannot marry until the older one does. (Both were de rigueur when the play was written.) It’s hardly the stuff of women’s – or anyone’s – lib, but there are ways around the play’s perceived anti-feminism – ways to equalize the couple and enhance the romance. None is apparent at Holmdel, although the sting is lessened by a relationship that downplays his dominance and her discomfort. He’s hardly a commanding presence; she’d tame him long before he would her.  It’s an interesting take, even if unintended: her playing the game to lose.

Re-setting Shrew is common enough, despite the many Italian references. Here it’s Edwardian England (early 1900s), which is as good as any, except that it makes for uninspired costuming. (Petruchio’s eccentric wedding attire is not as described in the text, but it is colorful, a la Kismet.)

Considering the number of female participants in community theater, some gender-switching is understandable, but turning Petruchio’s body man Grumio into Grumia alters their relationship for sure, and turns the Kate-Grumio scene from teasing to sadistic. Casting females as Grumio and Biondello doesn’t kill the play, but portraying both as cartoon characters who speak in voices, mug shamelessly and upstage everyone else nearly does. (Their unfunny, outrageous behavior is not solely the actors’ fault; it had to be done with permission.) 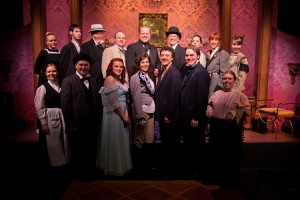 The cast of "Shrew"

No one said iambic pentameter was easy, but there are fundamentals that give directors and actors a leg up. Come to a full understanding of the lines – translate them, so to speak – and then deliver them naturally. Simply memorizing doesn’t cut it. Only a few of the actors accomplish that here. (Kate’s father Baptista is one; the young woman cross-gender cast as the tailor and milliner is another.)

Allowing Kate to race through her final speech as if she’s glad the play is over might be the unkindest gaffe of all. It blots the beauty and confounds the fame of one of the most renowned passages in all of English-language theatre, written, as is the entire play, by William Shakespeare.