Name a play that requires pre-reading to follow the plot…

You mean besides A Flea in Her Ear?

By any definition of farce (“a comic work typically including ludicrously improbable situations” is as good as any), Flea fits the bill. It’s a zany series of suspected and real infidelities and mistaken identity, with episodes of gunplay, a speech impediment and revolving hotel beds.

Raymonde (Christie Leigh Carver) suspects her husband Victor Emmanuel (Kris Longwell) of having extra-marital interests. Testing him, she and her friend Lucienne (Jessica Murray) send a seductive letter that Victor passes to his friend Tournel (Vincent J. Balzano), who has more than a passing interest in Raymonde. The household includes the customary sexy maid (Katie Hilosky, well cast), Lucienne’s homicidal husband (Wesley Loon), a doctor (Mike Levine) and a consonant-challenged nephew (Michael Stratton). Off most of them go to the Hotel Coq d’Or, where everything hinges on determining who’s doing what with whom. 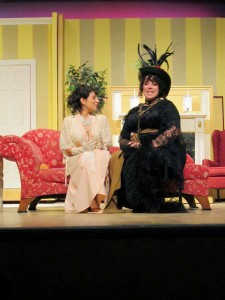 After the set-up scenes, Flea picks up farcical steam; relationships intertwine and near-miss encounters abound, all requiring precise physical and verbal timing. The Villagers cast is up to the task; as the pace quickens, so do they. The play is a mite too long and a couple of characters too many, but as directed with obvious affection by Eric Walby, this is funny stuff.

The cast, large by modern farce standards at 14, are all on the same uninhibited page; Walby has reined them in just enough to keep the chaos somewhat controlled. Among the few criticisms, the look-alikes, one a gentleman and one a hotel porter, are too similarly herky-jerky; Ms. Carver’s nifty ringlet hair-do should be liberated from her feathered hat in act three; one or two scenes cross over from hectic to mish-mash; and a kick-in-the-pants routine is way overdone. (The woman seated behind me who cackled at every kick would likely disagree.)

Changing a British hotel guest to a Texan, played by Heinley Gaspard, who half-mooned the opening night audience (shocking!), works fine; Mr. Stratton mangles the language efficiently (“Who would hire a man with only vowels to offer?”); and the brief exchanges en espanol roll out naturally.

Scenic designer Bree Guell gets a well-deserved round of applause. Not only are her sets serviceable and sturdy (it’s door-slamming farce, remember), the dual placement works perfectly, and the intermission turnarounds are quick and quiet.

The costumes, designed/gathered by Joseph Reilly, are period-modish and worn comfortably. Raymonde’s peach and Lucienne’s black outfits are particularly attractive.

One of the oldest gags in the book works as well here as it has anywhere. It’s the one where a guy runs up to crash through a locked door and the door is opened just as he gets to it. The bulky Mr. Loon’s momentum sends him crashing into the wings from which he emerges with a bathroom fixture around his neck. The bit is executed perfectly, and the thing is, there’s no door. It’s pantomimed. Worth the price…