The first of the three acts of Noel Coward’s Private Lives is a play in itself. It has a smart beginning, a quirky plot that’s revealed without obvious exposition, four distinctly drawn characters, wit-after-wit throughout its thirty minutes and a satisfying ending. It’s played very smoothly in the current Broadway revival.

Divorced couple Amanda (Kim Cattrall) and Elyot (Paul Gross) are each honeymooning in France with their new spouses, Victor (Simon Paisley Day) and Sybil (Anna Madeley). As fate – and Sir Noel – would have it, they find themselves staying at the same hotel…in next-door suites with connected balconies. 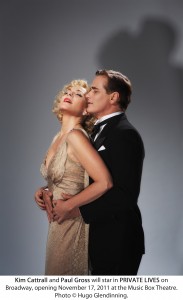 Elyot has snagged himself a much-younger, dithery Barbie Doll bride, whose “completely feminine” laugh is just this side of a giggle. (Ms. Madeley finds the character within the stereotype.) Amanda’s rebound husband is a stuffy sort, quite the opposite from Elyot. Constructed into interlocking two-scenes on the adjoining balconies, the first act is sophisticated repartee at Noel Coward’s best, culminating with Amanda and Elyot running off together to Paris, leaving their respective new spouses to commiserate together.

The rest of the play doesn’t live up to that beginning. While there’s a good deal of amusing dialogue, the love/hate (or spoon/spat) relationship repeats itself in episodic spurts. There must be six or eight reversals of affections, let’s call it, and even as well played as here, the central couple becomes tiresome.

In the repressed 1930s, no one was more successful than Noel Coward at hiding eroticism in plain sight. Couched in the tone of polite British society, the play is all about romantic passion. Ms. Cattrall, late of “Sex and the City,” and Mr. Gross (“Slings and Arrows”) are a smooth enough couple, but despite scripted declarations of sexual attraction, sparks are in short supply.

An actual physical battle-royale between the two is a traditional centerpiece of the play. Here it’s not only abbreviated, but the slap to Amada’s face by Elyot that provokes the fight has all the charm of an indictable domestic violence offense. It’s not funny anymore, if it ever was.

My best Private Lives was at the Shakespeare Theater of New Jersey in 2008, followed a year later by the worst at another NJ company that transposed the play to Argentina. This one falls squarely in between.