They dance! They sing! Oh, how they dance and sing in Irving Berlin’s White Christmas at Paper Mill Playhouse in Millburn, New Jersey. They also act out a story whose sappy style was obsolete ten years after the 1954 Bing Crosby-Danny Kaye movie from which the show is adapted, but considering the musical delights, who cares? The show defines the phrase “audience pleaser.”

Ensconced at Paper Mill through December 24, this White Christmas is superior to the production that played various US cities since 2004 and landed on Broadway in 2008. (The show has also become a holiday staple in the UK.) 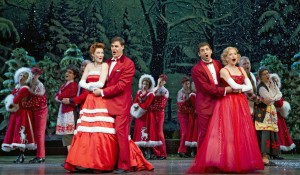 A few of the Broadway folks have crossed the Hudson, including choreographer Randy Skinner and dancer Meredith Patterson, a creator-muse relationship if ever there was one. Director Marc Bruni having been Walter Bobbie’s Associate Director is another plus. Their feeling for the show, coupled with some new blood and the classy suburban venue, has energized what “didn’t ignite” on Broadway.

The story about two old Army buddies, now big-time variety stars, putting on a show to save their former Commanding General’s Vermont Inn from bankruptcy is the framework for 16 Irving Berlin songs and for introducing romance in the form of a sister act into the mix. (One of each pair is a singer and one a dancer. Who would have guessed?)

Paper Mill has pulled out all the stops. Everything about the musical numbers is top drawer. Everything: The songs (duh), the orchestra, the staging, the leading singers and dancers, and a terrific ensemble, all with star quality themselves.

With some Berlin tunes, including “Let Yourself Go” and “I’ve Got My Love to Keep Me Warm,” pressed into service from other sources to supplement the already rich score, White Christmas is a cornucopia of musical riches.

As the singing couple, Jill Paice and James Clow get every ounce of nostalgia from the oldies-but-goodies “Love, You Didn’t Do Right By Me” and “How Deep Is the Ocean,” sung back-to-back in a posh NYC night club setting. “Count Your Blessings (Instead of Sheep)” is nearly a prayer, but it works just fine as a falling-in-love song.

Ms. Patterson and her partner Tony Yazbeck set the tone early with “The Best Things Happen When You’re Dancing,” and truer words were never spoken. This is a dance-rich show, highlighted by the “I Love a Piano” production number that opens the second act and earns prolonged applause – no, cheers – that literally stops the show.

Lorna Luft, playing the harried manager of the Inn, sings and hoofs to “Let Me Sing and I’ll Be Happy.” Cheers for her are mixed with a few tears, for Ms. Luft’s vocals and movements recall the image of her mother, Judy Garland. (Ten-year old Andie Mechanic reprises the same number as if born to it as well.)

There is one problem that cannot be ignored: The audience singalong to (I’m dreaming of a) “White Christmas” is too darn short. Singing along with these terrific singers, dancers and musicians? Shoot, I had another hour in me.