The setup is simple enough. Maude Gutman has been led to believe that the painting she bought at a yard sale for three dollars might be a Jackson Pollock original. She sends an inquiry to an Art Foundation, which sends expert art appraiser Lionel Percy to evaluate the painting. The two characters comprise the cast of Bakersfield Mist. 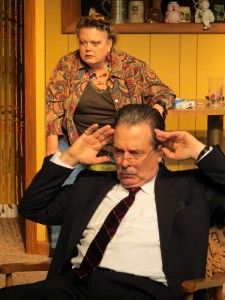 In the 100 minutes of Stephen Sachs’s new play at New Jersey Repertory Company, Maude and Lionel discover more about each other – and about themselves – than they do about the painting. (Don’t bother skimming down; the verdict isn’t revealed here.)

The play is a Network World Premiere, with several scattered theater companies introducing it around the same time. It’s difficult to imagine it better directed and acted. That doesn’t mean it’s perfect, but here its story unfolds naturally, with particulars of plot and character revealed in non-forced exposition. It’s a damn interesting play.

Bakersfield is based on a real woman’s thrift-store purchase of a painting that mimicked Pollock’s “splatter” (or “action” or “drip”) technique. The actual case, still undecided, is documented in the film “Who the #$&% Is Jackson Pollock.” But playwright Sachs could just as well be motivated by any number of recent art-origin disputes. (New cases were detailed in the New York Times and the Asbury Park Press – on the very day the play opened.)

Maude (Linda S. Nelson), a woman of imposing girth, lives in a trailer, another superbly detailed, if overly tidy, setting by designer/furnisher Jessica Parks. Maude is unkempt but hardly slovenly…and she’s no dummy. Neither is Ms. Nelson, of course, whose performance is spot-on. Her Maude is self-aware and, beneath a deceptively slapdash veneer, shrewd.

Lionel (John FitzGibbon) is Maude’s polar opposite (dig their names). He’s a sophisticate [pseudo] with social airs [pretentious] and an impressive art-appraisal background [questionable]. Mr. FitzGibbon nails all those qualities, including the ones in brackets. His wavering accent elides over consonants (‘aht’ for ‘art,’ for example), but his carriage and attitude are consistent. He’s haughty, yes, but not quite snotty.

Two-character plays* are threesomes during rehearsal, with the director an equal partner until the actors bond as a couple. It seems clear that SuzAnne Barabas was very much in the mix and backed off at the appropriate time.

I attended the final preview, but pointing out two blemishes is legitimate criticism: Maude’s dialogue is laced with more f-bombs than I heard in the Army. Why do emerging playwrights do that? Easy, because they can. The word can be a powerful device on many levels, but not when it’s as commonly spoken as “the” or “and.” Second, both characters down enough straight shots of Jack Daniels to put them on the floor. Them getting tipsy serves the narrative, but these two would be in the ER. Both factors detract and distract from an otherwise worthwhile play.

*Years ago, just before opening night of an under-rehearsed “Owl and Pussycat,” director Gennaro Montanino gave Barbara Ann Teer and me sage advice. “Remember,” he said, “when one of you shuts up, the other one better say something.”