Zooming Across The Pond: “Lungs” at The Old Vic

How’s this for minimalism: Playwright Duncan Macmillan’s instructions for the staging of “Lungs” specifies a bare stage with no scenery, no furniture, no props, no mime and no costume changes. Nor should light and sound be used to indicate a change in time or place. The absence of a full stop at the end of a line, he informs, indicates “…a trailing off or an interruption of thought.”

Further, other than forward slashes (/) to indicate overlapping dialogue, and a comma (,) on a separate line to indicate “a pause, a rest or a silence, the length of which should be determined by the context,” there are no stage directions or character hints in the “Lungs” text. Not one. (Beckett’s spare “Waiting for Godot” has a couple hundred.)  Zoom-streamed last week from the Old Vic Theatre in London, the Covid-mandated empty auditorium might as well have been an extension of Macmillan’s instructions. Nonetheless, stripped as it is of theatrical contrivance, “Lungs” is as rich and complete a play as any that is dense with descriptive aids.

Over ninety minutes, a couple, identified only as W and M, converse in variously open and guarded intimacy at different stages of their relationship in a dozen or so locations. Some lines of dialogue signal the end of a conversation thread and the start of another simultaneously: “Come straight home…and bring cake.” “Okay.” “…Cake.” “I missed you.” But there is never any doubt about where they are or at what juncture in their relationship or about what is revealed – or obscured – in their assertions or evasions.

Claire Foy and Matt Smith on The Old Vic stage

Claire Foy and Matt Smith are an actor-couple to reckon with. W and M are diametric opposites from Queen Elizabeth II and Prince Philip, whom they played in “The Crown” on Netflix. “Lungs” is contemporary not just in time (It premiered in 2011), but in attitude, tone and distinctly non-Royal language. (Multiple R-rated bombs, but not gratuitous.)

That deeply personal conversation occurs, we learn, while they are on the checkout line at Ikea. (“that kid with the panda is staring.”) Offbeat humor like that is sprinkled throughout the otherwise serious piece. It felt a little strange to laugh out loud at my iPad, but only the first couple times.

Later, the environmental impact of adding a new being to the planet is a consideration:

“I could fly to New York and back every day for seven years and still not leave a carbon footprint as big as if I have a child. Ten thousand tons of CO2. That’s the weight of the Eiffel Tower. I’d be giving birth to the Eiffel Tower.”

While there is considerable back-and-forth on the parenting issue, the topic is as much a window into the pair’s overall psyches as it is a plot-point. (It does ultimately factor in. Think Chekhov’s baby.) Foy and Smith find remarkable emotional depth in mostly clipped lines; there are only a few extended speeches. So many quick exchanges make incontrovertible sense:

There is also eloquence in Macmillan’s pauses (those separate-line commas). One such, waiting for M to drop a one-word clarification, is a study in hold-your-breath anticipation. Their drawn-out silence speaks volumes, especially when presented in close-up. 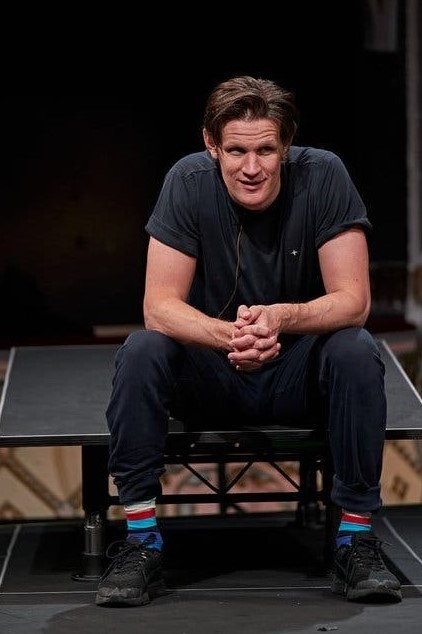 Which brings us to the staging and the viewing experience. Overseen by Old Vic artistic director Matthew Warchus (“God of Carnage” and “Matilda” on Broadway), “Lungs” was ideally suited to be the first in The Old Vic’s “In Camera” series of Zoom-streamed performances (more below).

There were three cameras: One, sparsely employed, projected wide shots from the front stalls; the other two were in tight, one on each actor, projected on a split screen. Foy and Smith are on stage together – occasionally one is seen crossing through the other’s space – but in a nod to social distancing, they do not actually embrace – or touch in any way. Marvelously staged by Warchus (and a tech-savvy crew), the actors seemed to be close, even leaning against each other back-to-back across the split. By the time W and M appeared to be romantically intimate, the fact that they were really at least two meters apart never crossed my mind.

Okay, it’s not like actually being there (even with the pre-curtain audience buzz), but with the brilliant Claire Foy and Matt Smith interpreting Duncan Macmillan’s fascinating play in close-up, my iPad was the best seat in the house. More than just drawn in, I was mesmerized – by the play, the performances, the technique. And grateful, under the circumstances, to be back, even virtually, in a theater.

[ The Old Vic’s “In Camera” initiative will continue with a series of rehearsed play-readings Zoom-streamed live with the empty auditorium as a backdrop. With minimal staging and accessible only via camera, the series is an exciting creative experiment and, based on “Lungs,” one well worth the price of admission. “Lungs” tickets ranged from 20 to 60 British pounds. (I paid 40, about $55US.) For information and to register for timely notifications: https://www.oldvictheatre.com/whats-on ]