A solo show evokes Lenny Bruce: Comedian…and so much more

You are unlikely to ever see the theatrical title “I’m Not a Comedian…I’m Richard Pryor.” Or George Carlin. Or Chris Rock. Or Sarah Silverman. But appending the name Lenny Bruce is altogether appropriate. Not that he wasn’t a comedian, because he was, and a damn funny one. No, it is what he was in addition to being a comedian. What else he stood for and represented, without which, btw, none of those other names would be in the mix. Just ask them. (Carlin once told me he credited Lenny with inspiring his transition from the Hippy-Dippy Weatherman to “my true self, man.”)

Lenny Bruce was a champion of free speech and civil rights, including blanket acceptance of human differences. He abhorred the abridgement of any of those liberties and was especially disdainful of hypocrisy. To those ends, his routines ‘addressed social taboos and controversial topics, such as racism, sexism, politics, and religion’.* 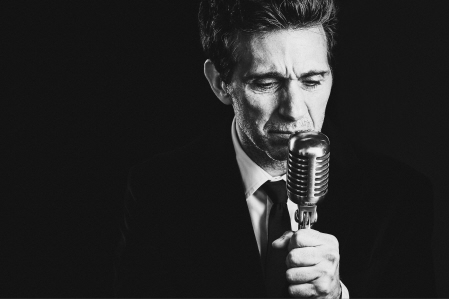 While writer and performer Ronnie Marmo’s “I’m not a Comedian…I’m Lenny Bruce” includes examples of Lenny’s comedic talents, about half of the 90-minute solo show at the Cutting Room on East 32nd Street is devoted to his defense of those other values and, after he was pilloried for his terminology, defense of himself. The autobiographical portions are in Bruce’s voice, which Marmo evokes without resorting to out-and-out imitation. (In Lenny’s trademark black suit, white shirt and black tie, he even looks a little like him, more so as the show goes along.)

I have only a dim memory of Julian Barry’s 1971 Broadway play “Lenny,” with Cliff Gorman, and I have not seen Bob Fosse’s 1974 movie adaptation, with Dustin Hoffman, in years. (The 2011 off-Broadway re-creation of Lenny’s groundbreaking 1961 Carnegie Hall concert is best forgotten.) My memory of having seen Lenny Bruce a dozen or more times in the late 1950s/early 60s remains vivid, and “I’m Not a Comedian…I’m Lenny Bruce” is as close as you’ll get to the real thing.

With the approval of Lenny’s daughter Kitty Bruce, who, along with Marmo’s own company, Theatre 68, produced this show, much of the material is straight from Lenny’s recently re-issued autobiography, ”How to Talk Dirty & Influence People.”  Marmo, in fact, narrates the audio version. (The free sample on Amazon.com includes Lenny’s bit about “getting it,” as in “you’ll get it when your father comes home.” Marmo’s intonation is spot-on Lenny Bruce.)

To be sure, riffs on the N-word (also S and K) and a deconstruction of the F-word, all included here, still have the potential to offend, even in a progressive context. The difference is that there’s no phalanx of cops waiting for the infamous ten-letter intimacy phrase to drop so they can swoop down and cart him off to appear before a self-righteous magistrate with the power to strip him of his ability to make a living.

Arguably, Lenny Bruce’s tragic flaw was his inability to cope with circumstances that were stacked against him and that eventually wore him down. He was a victim of a repressive system that he could not have known would crumble, in large part because of his defiance, which, ironically, destroyed him. Marmo portrays Lenny’s descent into drug addiction and general disrepair unsparingly; his opening and closing tableaux are devastating.

The director of a solo show is an off-stage co-star, a role that Joe Mantegna has obviously embraced here. He has Marmo using a full emotional range all across the wide stage. There’s nary a lull, although sprinkling in a few more snippets of Lenny’s really funny early bits would afford a welcome respite from the intensity of the later legal stand-off. With a fine set and especially effective lighting design by Matt Richter, and Hope Bello LaRoux’s evocative and pointed sound design, Cutting Room’s cabaret-style space is ideally suited to the show. (It is reminiscent of the Red Hill Inn in Pennsauken, NJ, where Lenny Bruce appeared in the late 1950s.)

The show is recommended for admirers of Lenny Bruce (or his legend), who already know what all the fuss was about. For those who don’t know, check into “I’m Not a Comedian…I’m Lenny Bruce” and find out.

Through December 31 at the Cutting Room, 44 East 32nd Street, NYC. For show schedule and tickets ($50-$70, with $125 Champaign option): www.thecuttingroomny.com

*That starred sentence above, about “addresses social taboos and controversial topics such as racism, sexism, politics and religion” is a direct quote off a Wikipedia entry. Sarah Silverman’s.