“The Women of Padilla” is a very well-written play, a realization I came to while reading it a couple days after seeing it at Two River Theater.

If ever a play was suited for Two River’s intimate black-box Huber theater, it is “Padilla,” but Tony Meneses’ 75-minute play about eight Mexican women waiting at home while their husbands are away at war is being staged in Two River’s 350-seat main auditorium, a veritable arena by comparison.  On the page, each woman is distinctly drawn both individually and in relation to the others. In brief, often clipped exchanges (most speeches are one or two sentences), Meneses exposes the women’s close-to-the-surface emotions with clarity and urgency. On the wide stage those elements are diffused; the words are there (and the performances are fine), but there’s little tension.

While there is a Padilla municipality in Mexico (thanks, Google), the title refers not to a location, but to a shared surname, acquired by the eight women when each married one of eight Padilla brothers, all of whom are at arms in an unspecified war (“It’s just men and bloodshed; it doesn’t matter where”). The sisters-in-law are thus linked by marriage, but more so by longings for their husbands and fears for their well-being. In the course of the play they tease, bicker, gossip (best not be the absentee) and support one another.

Padilla women early in the play…

They also commiserate as the ravages of war come home to roost – literally. Well, symbolically literally, if you’ll allow a seeming contradiction. Word of battlefield casualties arrives via swooping birds that drop written-name notes and then fly away. Represented as large, stylized messenger pigeons, and manipulated smoothly, they inspire dread among the women (and some inexplicable titters from the audience).

Written by a man, the play emanates an acute sense of its women’s values, emotions and some quirky wit: “We’re out of oregano,” one says. “Here,” another pulls from her pocket. “You carry oregano with you?” “Yes, let me know if you need anything else.” There are also more than a few heart-stoppers: “…I imagined my own touch was his.”

Each woman is identified by a particular characteristic: there’s Carmen (Jeanine Serralles), the one who drinks (and gets laughs); Mari (Jacqueline Correa), who quietly leads (and who imagined that touch); Marta (Keren Lugo), the one with faith, who prays through a hole in her roof (“The bucket’s for the rain”) and Alejandra (Paloma Guzmán), the one who’s ‘expecting’ (an unnecessary euphemism – even in rural Mexico) and whose pigeon-note is shattering.

Cristina (Elizabeth Ramos), the one who’s young, is 16, as is her husband, who didn’t want to be the only bro with no one waiting at home; Fidela (Daniella De Jesús) is the one who’s taciturn (but travels with oregano); Lucha (Helen Cespedes), the one with poetry, caps the play with signs of hope. Last but not least is Blanca (Karina Arroyave), the one on the outside. She’s housework challenged (“I lack a critical eye when it comes to cleaning”), but it is to her that Mari opens up in an emotionally written and acted two-scene: “How do you do it?” Mari asks her. “The birds won’t stop. How do you do this by yourself?” “I’m miserable,” Blanca replies. “I sit here, every day, drowning in this house, drowning in my own despair.” (Cue break from reading for a sip of tea and a tissue.) 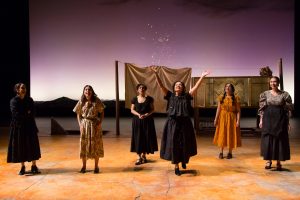 …and late in the play. In between is an emotional journey. (Photos: T. Charles Erickson)

That the production does not fulfill the play’s potential is certainly not the fault of the eight-actor ensemble (each of whom, strangely enough, projects the Padillo boys’ strikingly similar taste in women) or, for that matter, of any one individual. While director Ken Rus Schmoll shoulda/coulda tightened up the staging and brought the women closer together physically and other-ly, he’s not helped by designer Arnulfo Maldonado’s set or furnishings or props, which barely indicate in whose houses each of the ten scenes take place. (It’s clear in the text, but much of the matching dialogue is lost to a lack of vocal projection.) Rather, it is the overall conception that diminishes the play.

During my reading of “The Women of Padilla” I took a few breaks just to prolong the experience; no such impulse occurred during its opening night performance.