There is an intriguing one-act, 80-minute play on the New Jersey Repertory stage. Unfolding in the fertile theatrical setting of higher-education academia, it deals with faculty jealousy, conflicts between established and fresh values, artistic integrity and racial tension. It takes some digging, however, to excavate that play from Robert Caisley’s two-act “& Juliet,” which is burdened by 20 extra minutes of repetitious dialogue. “Get to it!” I wanted to call out several times as the characters talked around the same topic over and over before finally making their points.

Those points revolve around newly-hired Theatrical Department director Charlie’s decision to pass over well-prepared African-American female student Annie in favor of casting a 14-year old boy as Juliet in the upcoming Shakespearian production.  (Despite Gwyneth Paltrow’s luminous turn in “Shakespeare in Love,” the original Juliet, circa 1598, was Robert Goffe, whose modern-day counterpart is an off-stage presence in Caisley’s play.) 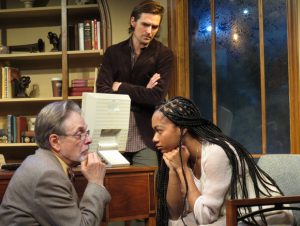 Charlie (Jacob A. Ware) is assuming the duties (and scenic-view corner office) of 30-year veteran professor David (John Fitzgibbon), who resents the newcomer on his own as well as Annie’s (Nadia Brown) behalf. The elongated opening scene between the two men bristles with the elder’s Thinly Veiled Hostility, which eludes busily unpacking Charlie.

Ware fits the role of an idealistic teacher/director who would embrace the ‘radical’ casting – even making it seem reasonable. He plays some of Charlie’s confrontations with such high-volume anger, however, that the actor has no room to build within the scenes. That over-intensity drains some of the sympathy for Charlie, but we still root for him – at least I did. Ware plays his gullible innocence convincingly.

Director Marc Geller also loosened the reins with the other two actors. We really, really get that Annie really, really wants to play Juliet. In fairness to Ms. Brown’s charm and effectiveness in the few more laid-back moments, there are only so many ways to declaim oft-repeated and barely-paraphrased speeches. It is the playwright’s Annie that finally grates, not the actress’s. And If Fitzgibbon strays into over-acting, the fault may lie with the pompous Professor he’s playing. It will be noted, however, that no one plays Thinly Veiled Hostility better than Fitzgibbon. Between his David’s nasty tinge and Charlie’s initial naïveté, the play couldn’t end any way other than how it does. (No more about that.) 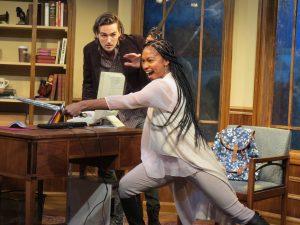 You do not want to mess with this would-be Juliet!

This is, after all, the play’s first outing, affording Caisley the opportunity to tighten it up. Less-is-more may be a cliché, but not without reason. Cutting excess verbiage from “& Juliet” will sharpen the characters and the story. “Let me explain,” implores Charlie more than once. And then doesn’t. Sheesh, let the man explain. (Don’t monkey with the set, though. Another conquest over NJ Rep’s smallish stage by Jessica Parks: would you believe…a turntable!)

In a nod to irony, the program bio informs that Nadia Brown recently appeared in a production of “Richard III” as Rivers, a character written as a man. With the estimable Elizabeth Marvel slated to open as Marc Antony in Central Park later this month, maybe Ms. Brown should bypass Juliet and set her sights on Romeo.

One more note: In 2013, the Stratford Festival in Ontario did “R & J” in a form they called “original practices,” which entailed leaving the house lights up (at half) with a strong spotlight simulating the sun progressing slowly across the stage, a totally bare stage, overlapping scene-change entrances and exits, and Elizabethan (rather than Verona Italian) costumes, as the actors then often wore their own clothes. Stratford stopped short, however, of Mr. Caisley’s suggestion: Sara Topham was their Juliet – and a superb one she was.