William Shakespeare’s second tetralogy, known as the Henriad, covers 22 years of English history, from 1398 to 1420. He wrote the compilation’s four plays over five years, from 1595 to 1600. Canadian actor and director Graham Abbey spent 15 years combining them, from 2001 to now, when his Henriad mashup is being staged at the Stratford (Ontario) Festival in two sections: Richard II with Henry IV Part I and Henry IV Part II with Henry V. That Abbey completed the project is remarkable; that he captured the four plays so well in 90 minutes each is more so. And as usual at Stratford, the plays are eminently accessible; 20 actors playing some 70 roles understand every word and therefore so do we.

Richard II is Shakespeare’s only play written entirely in verse; here the words soar in tone and clarity. The play covers the last two years of Richard’s life, from the mysterious murder of his own uncle and his ill-advised banishment of Bolingbroke (later Henry IV) through to his descent into despair as his power wanes. Tom Rooney’s performance captures both extremes and the process between them. Richard’s iconic “For God’s sake let us sit upon the ground / And tell sad stories of the death of kings…,” foreshadowing Richard’s murder, is but one exquisitely rendered speech. John of Gaunt’s “…this scepter’d isle… This blessed plot, this earth, this realm, this England” is another. Richard II, probably the least familiar of the four plays, is the most fully realized. 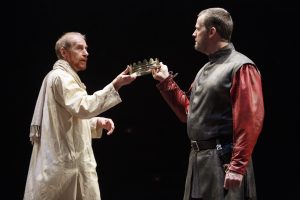 Several male roles are acted by women. (The plays are dense with male characters.) The genders are portrayed as written, and while Carly Street’s Archbishop of Canterbury may be a stretch, her Thomas Mowbray registers just fine. 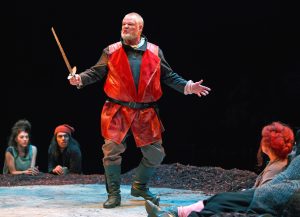 Henry IV Part I introduces one of Shakespeare’s grandest characters, Sir John Falstaff. The rotund, carousing companion of Prince Hal/Harry (son to Henry IV, later Henry V) is a classically comical tour de force by Geraint Wyn Davies. The play begins with news of a Hotspur-led English victory over the Scots and ends with Henry’s defeat of Hotspur, whose loyalties had shifted, at Shrewsbury, in as exciting a battle scene as I’ve seen on stage. Graham Abbey himself plays Henry; he’s excellent as both the young and older monarch, and support in the many other roles, including a motley gaggle of Falstaff’s cohorts, is outstanding.

If the final two “chapters” of the Henriad come up a bit short, it is in the interpretation of Prince Hal/Henry V. Young and reckless in Part I, a more mature Hal ascends to the throne at his father’s death in Part II. Araya Mengesha is an immature-seeming Hal, whose transition into the regal, charismatic, orating warrior Henry V is unconvincing. The fault, it should be said, lies in the casting; Mengesha does justice to the language.

As You Like It features audience participation, to which I am congenitally allergic. Everyone was given a bag containing a plastic tree branch, a paper crown and other props, which, when instructed by a comedy-club-like emcee, were to be waved (“Show us your bush!”) or worn to indicate the Forest of Arden, the court, et al.

Notwithstanding the foliage, the play, supplemented by onstage musicians, unfolds at a merry pace. The production is set in 1980s Newfoundland, director Jillian Keiley’s home province, where the disparity between the oil-wealthy capital, St. John’s, and its less-favored rural areas, parallels the play’s exiles from the court to the forest. (My Canadian companion noted Newfoundland accents, costumes and scenic devices, which, while eluding me, were endorsed by the audience, which included busloads of Newfoundlanders and appreciative youngsters.) 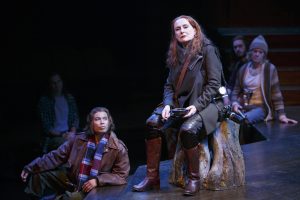 Rosalind (Shakespeare’s longest female role), disguised as macho Ganymede, outfoxes love-struck Orlando. (Pinning his love poems on audience tree limbs is a clever touch.) Gender-switching both actor and character, Seana McKenna plays the melancholy Jaques, and Duke Senior, Rosalind’s father, becomes Duchess Senior, her mom. Both seem acceptable enough in 2016, and Ms. McKenna’s rendition of the Seven Ages of Man speech was everything it should be. (She actually played Richard III in 2011. Can Lear be far behind?)

Among the Festival’s non-Shakespeare offerings, both A Chorus Line and A Little Night Music outstrip their most recent Broadway revivals by a long shot, and the North American premiere of the stage version of the movie Shakespeare in Love is fabulous.

Reconfigured for the festival’s spacious thrust stage, director-choreographer Donna Feore’s A Chorus Line employs angles and depths not seen in prior productions. The 1975 Pulitzer and Tony-winning musical, choreographer Michael Bennett’s crowning achievement, has a life of its own; it inspires whoever does it, not excepting the marvelous Stratford Company. 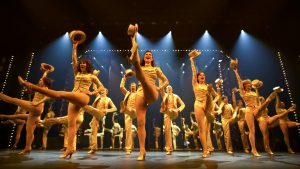 Built around the hopes and insecurities of a group of auditioning dancers, the musical resonates with anyone who has ever interviewed for a desired job. Some roles are more prominent than others, but A Chorus Line is a true ensemble piece. When these 20 extraordinary dancer/singer/actors sing “What I Did for Love,” backed by the same number of top-notch musicians, the emotion overflows the stage.

Inspired by Ingmar Bergman’s 1955 film Smiles of a Summer Night, Stephen Sondheim (music and lyrics) and Hugh Wheeler’s (book) A Little Night Music is a wry view of several couples’ romantic entanglements in early 20th-century Sweden. If you, like I, have found the scenario overly complicated, get yourself to Stratford, where the story has never been more clear, the humor more pointed, the couplings more natural or the musical portions, all in three-quarter time (or multiples thereof), more delightfully rendered.

Members of the A Little Night Music company.

Middle-aged Fredrick; his virginal child-bride Anne; his son Henrik (in love with Anne); his former mistress, actress Desiree Armfeldt; Count Malcolm, Desiree’s current lover; Charlotte, Count Malcolm’s wife; Madame Armfeldt (Desiree’s mother) and assorted other participants are all distinctly individual as the roundelay plays out. Among the highlights: the ensemble “A Weekend in the Country” and Desiree’s “Send in the Clowns.” Staged a tad differently by director Gary Griffin, “Clowns” has never been more meaningful or poignant.

Shakespeare in Love opens with an inspired bit. The young Will Shakespeare is struggling over a particular sonnet. “Shall I compare…um…,” he trails off… several times…until he gets help: “THEE” from audience members. Thus unblocked, he retreats into the play, and we’re off into two blissful hours of romance and comedy. 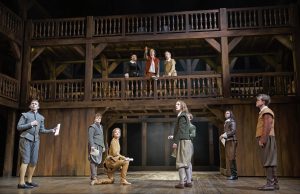 A scene from Shakespeare in Love

“You could be the best of us,” Marlowe tells the struggling young playwright, who, inspired by luscious upper-class Viola de Lesseps, goes on to write Romeo and Juliet (casting aside his draft of Romeo and Esther, the Pirate’s Daughter). If that’s not really the way it came about, including the then-unheard-of appearance of a female as Juliet, you’ll have to prove it to me.

Rich with Shakespearean puns and out-of-context passages, Tom Stoppard’s witty screenplay is well-served by Lee Hall’s adaptation. Look for a Broadway transfer for sure. This production, imported from London, is cast from Stratford’s own company, and if you look up “romantic chemistry” in your OED, you should see the picture below. As Shakespeare himself noted (in another context, to be sure), ‘Tis a consummation devoutly to be wished. 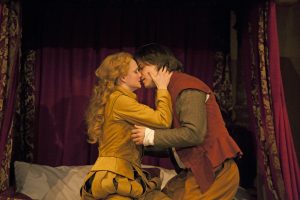 Shannon Taylor as Viola/Juliet and Luke Humphrey as Will Shakespeare

The Stratford season runs through October and also includes Macbeth, All My Sons and several other works including an adaptation of The Lion, the Witch and the Wardrobe. For a schedule brochure, call 800-567-1600 or visit stratfordfestival.ca.

Ontario is also the home of the (George Bernard) Shaw Festival, which we’ll be reporting on soon. Both Stratford, in south-central Ontario, and The Shaw, located in Niagara-on-the-Lake, just north of Niagara Falls, are easily accessible by car, and the currency exchange rate greatly favors U.S. budgets.