As someone who saw Dick Gregory in person years ago (in Philadelphia-area night clubs) and who still admires his commentaries when the social activist, now 83, calls in to the Imus in the Morning radio program (“Hello, my brother,” he greets Imus), I can vouch for the authenticity of Joe Morton’s portrayal in Gretchen Law’s anecdotal bio-play Turn Me Loose. It’s not a slavish imitation of the precedent-setting comedic genius, rather an immersion into the essence of the man, embodying his deeply felt and brilliantly expressed thoughts on the passing parade. And is it funny! Reprising some of Gregory’s appearances in the late 1950s and early ‘60s, much of his biting, then-topical material, centered on race relations, is still biting and, unfortunately, still topical. 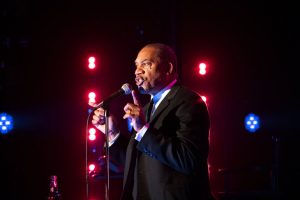 Gregory was the first African-American comic to headline the Playboy Club in Chicago (which his cab driver found hard to believe), where his weekend gig stretched into a six-week engagement. He was also, famously, the first to be invited onto the Tonight Show convo-couch after doing his stand-up act. (He turned down Jack Paar’s invitation to be on the show until that condition was met.) He also relates that he titled his 1964 autobiography “Nigger” so that every time someone said that word they were plugging his book, and in a similar (somewhat milder) vein, he named one of daughters Miss, assuring that Miss Gregory would always be addressed with respect. (He also first-named a son Gregory. Really.)

Joe Morton captures the comic presence of the young Gregory, but it’s the portion of the 90-minute running time devoted to social issues that that is most telling. In pin-drop quiet after bursts of knowing laughter, the audience is mesmerized by, for example, his consideration of Richard Nixon’s Southern Strategy, when “poor white folks voted Republican for the first time in their lives.” Not because they cared about what the Republicans stood for, he points out; “they were just tryin’ to hide their bigotry.” That was 1968. Or maybe it ‘was’ next November.

With support by John Carlin, who plays a heckler and other bits, and directed by John Gould Rubin, Turn Me Loose is a tribute to Dick Gregory, with Joe Morton burrowing into the man’s very essence.

The limited off-Broadway run closed last week, but a well-sourced rumor has it that the play will soon open on Broadway.

ests Tommy (in a discreetly-staged scene), and Paolo Arceo is terrific as Cousin Kevin, who taunts his cuz but comes to admire him.