Fortunately, the glorious music has lost none of its luster, as Phoenix Productions is amply demonstrating at the Count Basie Theatre in Red Bank. The marvelous Cole Porter score’s strongest appeal is probably to an aging audience – baby-boomers and even older – but seeing Phoenix’s young cast do such a fine job with that score is heartening. The performers may be young, but they ‘get’ that the songs are ageless. Hearing Howell NJ High School junior Kelsey Seaman sing “It’s De-Lovely” and “All Through the Night” so well with the not-much-older Michael Santora and then the lesser-known “Goodbye, Little Dream, Goodbye” alone and confident at center stage is an affirming youth movement in itself. 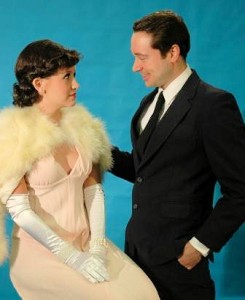 Kelsey Seaman and Michael Santora in "Anything Goes"

Written in 1934 and originally titled Bon Voyage, the show was to be about a group of oddball characters on an ocean liner facing shipwreck from a bomb threat. With rehearsals about to begin, the S. S. Morro Castle went down in flames off the coast of Sea Girt, claiming 135 lives, and the plot was hastily changed to a sketchy story about society types and gangsters aboard a transatlantic liner. The original writers were unavailable, so director Howard Lindsay and press agent Russel Crouse re-wrote and changed the title to Anything Goes to reflect the slapdash concoction.  (Lindsay and Crouse became a celebrated writing team: The Sound of Music anyone?)

Fortunately for the Cole Porter score, nightclub entertainer Reno Sweeney (Jennifer Grasso) is also on board.  She kicks off the abundance of musical riches with “I Get a Kick Out of You” and follows up one scene later with “You’re the Top,” a swingy duet with Santora. Later, Grasso gets her vocal chops around the “Anything Goes” production number and a rousing “Blow, Gabriel, Blow.” Ms. Grasso moves well, too, although her stiff wig does not. (Why? Her own blonde locks are lovely.)

Other musical highlights include Santora’s take on “Easy to Love,” which he has the good sense (or guidance from musical director Robert Sammond) to sing rather than croon, and “Friendship (a perfect blendship),” which is given a good ride by Grasso and Preuster. Then there’s “Buddie, Beware,” Erma’s vampy song-and-dance known only to ardent Porter fans; here it hints that there might be a Reno Sweeny in Ms. Townsend’s future.

Andrea Zawadzky is fine as Hope’s hoity-toity mother, as is David Harris as her stuffy paramour. As the ship’s captain, Bob Brown really looks the part; so do Taylor Wallace, Torie-Marie Gigante, Carly Nelson and Kelsey Susino as Reno’s back-up singers (only prettier).

Praise also to the large ensemble’s consistent enthusiasm. (The women up on the steps during the “Anything Goes” number really get into it!)  Despite a couple of minor opening-night glitches, the show’s technical aspects are first-rate. Tom Martini’s main set evokes a ship’s deck, and Sammond’s orchestra is as good as I’ve heard at Phoenix – inspired by Porter, no doubt.

This is an abbreviated-dance Anything Goes. Seaman’s dance moves are constrained by her fitted dress (C’mon, where’s the chiffon?), but choreographer Tara-Lynn Eccles keeps the tap routines clicking.

Director Gary Shaffer holds the whole enterprise on an even keel, even as, perhaps daunted by the vastness of the Basie auditorium, he lets too many roundhouse punches and too few jabs dominate the dialogue. A forgivable sin, to be sure, as long as the real star of Anything Goes is allowed to shine. At the end of the day it’s Cole Porter’s show.