Q: Which are more heart-warming: the four March sisters in Louisa May Alcott’s 1868 novel “Little Women?” or their portrayals in Thomas Hischak’s stage adaptation at Holmdel Theatre Company? A: It’s a toss-up. 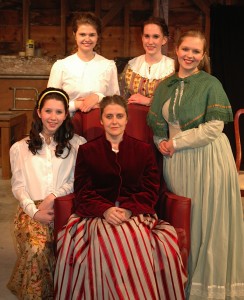 Loosely based on Alcott’s own experiences with her three sisters, the book is steeped in sentiment, but not sentimentality. That tone is captured at Holmdel, skirting mawkishness even during Beth’s one-and-a-half death scenes.

I’ve not read the book, but clearly, most of the females in the audience were not strangers to it, including ten-year old Liz Delgado, a New School of Monmouth County student I had the good fortune to be seated next to. Liz assured me that the events in the play accurately depict those in the book. (Her attendance was prompted by her mother having seen a road-side sign. Those staked-in-ground signs work? Who knew?)

Flashing back from the adult Josephine March’s memories to mid-Civil War years, the family is poorer than poor, but they find it in themselves to give away their Christmas breakfast to an even needier family. Give me a break: could this be portrayed without leaving a saccharine after-taste? Well, yes. So can several other bits of inspired sacrifice, including that the March husband and father (Joseph Stark) had volunteered to join the Union forces, leaving daughters Jo, Meg, Beth and Amy in the care of Marmee, their mother, warmly evoked by Laurie Devino.

Elderly Aunt March is on scene, well-played with a thin coating of nastiness by Judy Stone. So is neighbor Mr. Laurence (nice work by Jim Cusick), who eventually warms to the March clan, and his son Theodore/Laurie (Volney Stefflre, who might have just emerged from the book), who becomes Jo’s best friend and would-be suitor.

Thanks to Jacquie Revier and Lisa Zimmerman’s accurate costuming, all of the above – plus others played by Andrew Young, Dave Duncan, Ava Serene Portman, Elena Marie Chalcraft and Amy Stark – really look like their characters, which sounds like a gimme, but is far from it.

The play itself slumps after a very appealing first act, due to the March sisters going separate ways in act two. Their individual travels, jobs, and relationships complete the story, but one misses the sisterly byplay. Also, several second act scenes are overlong, a characteristic not ameliorated by some self-indulgent pauses. The playing area is no help; it’s not only very wide and medium deep, but director Tom Frascatore, whose character-relationship guidance has born delicious fruit, is less observant in the staging of the play. Too many scenes take place beyond the sight lines of a large portion of the audience, and a few are also inaudible, as if an actor is unaware that there’s an audience. 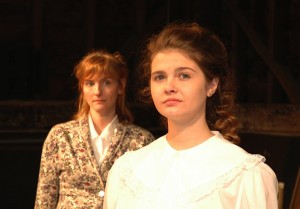 That noted, it’s the four sisters who grab and hold in that first act. Devlin Stark is delightful as Amy at age 12, and Gina Delio conveys her 17-year old romantic notions to a tee. (But why such a garish yellow wig?)  Claire Gates plays Beth’s fragility perfectly; it’s no wonder the girl pierces Mr. Laurence’s gruff veneer. In Amanda Deltuvia’s playing, Meg’s romance with Laurie’s tutor is part of a natural maturing process. The adult Josephine’s narration is more sense memory than simple reminiscence in Jennifer Silverstein’s delivery, and more effective for that.

Shannen Doyle is as poised a young actor as I’ve seen in a community play. Her Jo is at once impetuous and reserved, spirited and contemplative. It is an utterly natural, complete performance that has the effect of raising the level of those she acts with, even, in the performance I attended, dealing with dialogue slip-ups as if they were scripted.

Praising the Holmdel Company for presenting lesser-known or challenging works is old news by now. How nice of them to resurrect the March sisters for us…and to treat them with such loving care.

[Clicking on the *Follow icon at the lower right corner of this site’s home page will alert you to new postings – and will be much appreciated. Thank you.]