“Come Fly Away”: Frank Sinatra and Twyla Tharp Do It Their Way

Even sightless theatergoers would get their money’s worth at Come Fly Away. So might the hearing-deprived. Folks with both those senses in working order are advised to get themselves to Detroit’s Fisher Theatre between September 13 and 25. There they’ll find Frank Sinatra, fronting a sensational 15-piece band while a troupe of terrific dancers executes the thrilling moves conceived by visionary choreographer Twyla Tharp. 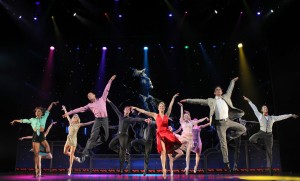 The "Come Fly Away" company

You never saw Sinatra live? Well, this is as close as you’ll get. The Chairman of the Board isn’t there, of course (he died in 1998), but The Voice sure is, digitally – and expertly – lifted off more than 20 of his best-known recordings. It’s a veritable hit parade of Sinatra classics, backed by live recreations of arrangements by Nelson Riddle, Quincy Jones and Billy May, as well as a few new, equally swingin’ charts to boot. From a dreamy “Stardust” that opens the show to the Big Apple anthem “New York, New York” that wraps it up, it’s as if Frank were right there in the flesh.

What is right there – and very much in the flesh – is that phenomenal dance ensemble. In 2002, Twyla Tharp’s Movin’ Out was a Vietnam-era parable, danced to Billy Joel’s socially conscious music and lyrics. Come Fly Away is social too. In fact, if the couples who meet and mate in the show’s 1940s night club were any more ‘social,’ the cops would raid the joint.

With “I’ve Got a Crush On You” for emphasis, long-legged Babe sets her sights on Sid. He doesn’t stand a chance. After Babe vamps her way through “Witchcraft” and “Teach Me Tonight”, Sid is a willing goner.

Smooth couple Hank and Kate (“The Summer Wind”) go through a rough patch (“That’s Life”) and end up “Just Friends.” Chanos and Slim seem meant for each other (“Yes Sir, That’s My Baby”), but Slim is a gal who’d rather be “Makin’ Whoopee.”

Marty and Betsy are a fresh, comical pair who meet cute (“Let’s Fall In Love”), discover a mutual attraction (“You Make Me Feel So Young”), stumble a bit (“Pick Yourself Up”) and finally settle in as a couple (“My Funny Valentine”).

The show is equal parts Tharp & Company and Sinatra, and their Come Fly Away chemistry will dazzle you. The sound reproduction of Frank’s vocals is superb, and various dancers from the company take the principal roles at different performances. Many are from the Broadway production; all are world-class modern jazz, ballroom and even classical dancers. Some showy numbers include a dozen or more together.

A couple of non-Sinatra numbers are standouts. The band brings down the house with Count Basie’s “Jumpin’ at the Woodside,” and a quartet does Paul Desmond’s “Take Five,” which any musician will tell you is a challenge to play. Choreographing and dancing to its 5/4 time is even more complex. The result here is something special.

P. S.  Some dance critics have lamented the open sexuality of Tharp’s choreography. Well, get over it. This isn’t Swan Lake; it’s Broadway pizzazz, baby. Ring-a-ding-ding.