“Assassins” – not a toe-tapper

You couldn’t make it up. On February 15, 1933, bricklayer Giuseppe Zangara, barely five feet tall and suffering with severe stomach pains which he blamed on U. S. capitalism, attempted to assassinate Franklin D. Roosevelt as the President-elect addressed a crowd. Too small to see over the crowd, Zangara stood on a wobbly chair, causing him to miss FDR and instead kill Mayor Anton Cermak of Chicago.

You couldn’t make Zangara up, but you could write a musical play about him and eight other individuals who attempted to assassinate U. S. Presidents, four of them successfully. Stephen Sondheim (music and lyrics) and John Weidman’s (book) Assassins is playing weekends at Edison Valley Playhouse, Edison, NJ through Sept. 24. 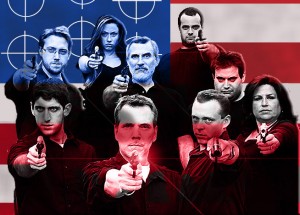 Considering its subject, its non-melodic score and any number of horrific firearm incidents since its premiere in 1990, the “anti-musical about anti-heroes” is an odd choice, but the undaunted Valley players pull it off.

Each assassin, from John Wilkes Booth to Lee Harvey Oswald, expresses his or her murderous motivation in songs that mimic spirituals, folk music, Sousa marches and more traditional musicals. The score isn’t exactly tuneful, and despite the best efforts of conductor/pianist Rory Chalcraft’s four-piece band, there are, understandably, lapses in vocal pitch and tempo.

The best numbers are those most like traditional shows. “Everybody’s Got the Right,” which opens and closes the play, is sung well by the ensemble; and Booth (Kris Longwell), Garfield assassin Charles Guiteau (Mike Levine), McKinley assassin Leon Czolgosz (Alex Ashrafi) and Gerald Ford shooter Sara Jane Moore (Teresa Von den Steinen) harmonize nicely on “The Gun Song,“ which contains the charming lyric “All you have to do is move your little finger and you can change the world.”

The acting is uniformly good; director Christopher J. Guell, who also plays an eerie carny barker, has a sure hand with distinctly different characters. Thanks to some fortuitous casting and Karen Resto’s varied and creative costuming, most of the actors actually look like the figures they’re playing – or how we imagine they looked – Joshua Levine as Zangara, for example. The actor-dandy John Wilkes Booth fits the image, as does the all-black clad Guiteau. Ms. Hilosky’s slender frame and hippie outfit are “Squeaky,” all right, and Steven C. Leshchanka, who really does resemble Lee Harvey Oswald, is chilling in a white tee shirt and jeans.

In 1973, Samuel Byck picketed the White House dressed in a Santa Claus suit. Here, Byck, who shot at President Nixon in ’74, is a disheveled Santa, played by Aaron Ratzan. The image is funny, and Ratzan rattles off Byck’s demented rants with machine-gun rapidity.

The one-act play, a bit long at nearly two hours, offers a cynical take on history, politics and humanity itself. Sadly, the violence once targeted at authority figures has spread into the mainstream:  high school and college campuses; strip malls; the workplace; even, recently, an IHOP, for god’s sake. With that in mind, several scenes with guns pointed directly at the audience might make some theatergoers uncomfortable. But that reaction is just as valid as laughing at The Odd Couple. Assassins is not typical theatrical entertainment, but it is art.