In his liner notes for the Spring Awakening original cast CD, book-and-lyric writer Steven Sater points out that the songs (music by Duncan Sheik) are not directed from one character to another, as they are in traditional musicals. Nor do they advance the plot. Rather, the songs function as “interior monologues” that “voice only the thoughts and feelings of each character’s private landscape.”

Conceptually, that works. “All That’s Known,” sung by an academically frustrated student, and “The Dark I Know Well,” a young girl’s anguished “private landscape” of paternal sexual abuse, are examples of just how well. Reading those and other lyrics after seeing the play is both poetically satisfying and emotionally wrenching.

Unfortunately, several factors conspire to obscure about half those lyrics in ReVision Theatre’s otherwise admirable production of the 2007 Tony-winning Best Musical. Some of the singing is just too loud, as if at an outdoor rock concert, and the sound system gain is way too high, compounding that fault. Also, the acoustically challenged tin roof of the Carousel House doesn’t help. Toning down to accommodate the rather intimate venue would enhance, not hamper, the show. (People seated near me advised the tech crew during intermission…to no avail.)

The relationship between Wendla, whose mother won’t/can’t explain the facts of life, and Melchior, who knows only enough to consummate their love, is at once sweet and heartbreaking. Elena Ricardo and Billy Lewis wring both of those qualities from their characters. Their work here hints at the possibility of a fine Juliet and her Romeo. 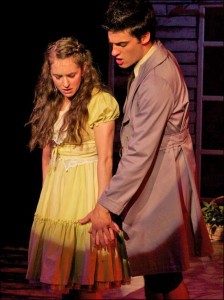 All down the line, ReVision’s casting, credited to Associate Producer Alecia Brooks, is nigh flawless. (Put her in charge of the sound.) How good is Noah Zachary as Moritz, traumatized literally to death by raging puberty and the disapproval of a stern father. How delicately is outcast Ilse portrayed by Taleen Dersdepanian. How tender is the scene where Ilse reaches out to Moritz…too little, too late. 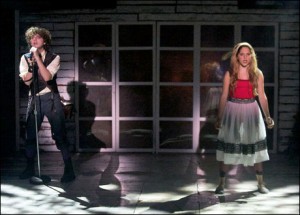 Spiro Galiatsatos and Spencer Kiely are fine as teen boys who discover their sexuality in each other. Their song, “The Word of Your Body,” had been sung earlier by Wendla and Melchior. The bittersweet love song transcends gender. (Blessedly, most of the lyrics are discernible: “O, I’m gonna be wounded. O, I’m gonna be your wound.”)

Renee Bang Allen and Travis Mitchell play all the adult roles, employing only minor costume changes to create a dozen or so believable characters, most of whom are unsavory. Both actors get a lot from multiple brief scenes.

Choreographer Elisabetta Spuria’s altogether appropriate mayhem parallels the teen-aged confusion and frustration that, based on audience reaction, hasn’t lessened since…whenever. “The Bitch of Living” is the boys’ rebellion against rigidity, and “Totally Fucked,” executed by the full company, is the anthem of every young person dead-ended by unyielding authority. The exuberant number is a barn-burner. Screaming applause: justified.

Musical direction by conductor Michael Thomas Murray is difficult to judge, hampered as it is by imbalance, but the five-piece band is more than adequate to the proceedings. Carlos Armesto’s overall direction mines most of the show’s emotional goodies and makes good use of the Carousel’s stage levels.

A colleague of mine is put out by the ubiquitous rock scores of shows set in pre-rock periods. He has a point, but not, I would offer, with Spring Awakening. Playwright Wedekind’s teens were 1890 and non-musical. If 120 years has eradicated hormonally-challenged, authority-questioning young people from our midst, nobody told me. And setting ageless kids to today’s music? Why not.