“next to normal” – not your normal musical

When Mickey Rooney and Judy Garland said “Let’s put on a show” they weren’t considering a musical about a woman suffering from bi-polar disorder and the effect her malady had on her family. They weren’t, but composer Tom Kitt and librettist/lyricist Brian Yorkey were, and their off-Broadway-to-Broadway musical next to normal garnered them the 2009 Best Musical Tony Award and the Pulitzer Prize for Drama.

Like Rent, the most recent of eight musicals to win a Pulitzer, next to normal is sung-through with some scattered spoken lines woven into its rock-lite score. As re-staged by original director Michael Grief (also Rent) and performed at the Four Seasons Centre for the Performing Arts in Toronto, where I saw it last week, next to normal travels well. It is an impressive piece of Theatre, highlighted by the stunning performance of Alice Ripley, reprising her Tony Award-winning performance as tormented wife and mother Diana. 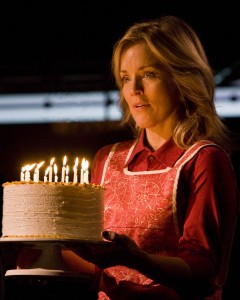 The ‘entertaining’ label most often attaches to light fare, which normal, while plenty funny in spots, is not. This outstanding play exposes its characters’ personal problems, even their agonies, in a way that we observe without voyeurism, a no less valid form of entertainment. And emotionally satisfying to boot. Not to trivialize the play or its important and somewhat grim subject matter, but who doesn’t enjoy a good sympathy-cry on occasion?

While the story centers on Diana and her husband Dan (Asa Somers), another couple is also at its heart. The budding relationship between the 16-year old daughter Natalie and her year-older boyfriend Henry is vitally important to the play, and as acted with ageless sensitivity by Emma Hunton and Preston Sadleir, their scenario complements and contrasts with Diana and Dan’s at the same time.

Bi-polar disorder is characterized by alternating periods of elation, referred to sometimes as manic, and depression, often sudden and sometimes extreme. Alice Ripley’s enacting of both those poles without sacrificing Diana’s warmth and outright likeability is an extraordinary accomplishment. In one manic episode, Diana goes into fast-forward, slapping lunches together by laying out slices of bread and sandwich fixings on the floor; later, in slo-mo, she dully signs off on a radical medical regimen that she hardly understands. In her playing, Ripley lets us laugh guiltlessly at the kitchen-floor deli and wrings deep concern out of us at Diana’s low moments. And Ripley’s singing: Lyrical, heart-rending and gutsy. All told, it’s a remarkable performance.

Diana’s husband Dan is alternately supportive and exasperated; he’s both the good guy and the bad guy of the piece. He does his best not to judge, but it’s not easy. “I never know what she’s about,” he says. “I have no clue.” Actor Somers keeps us sympathetic even when character Dan disappoints.

Daughter Natalie has much of the sparse spoken dialogue, and more realistic expression and delivery would be hard to imagine. Natalie’s normal teenage insecurity is heightened because of her mom – might she lapse into the same shadow world? But Natalie is outspoken, unafraid to speak her mind in bold terms. Hunton, too, sings with her character’s intensity. In lesser company, she would be a scene stealer. That she more than holds her own with Ripley is high praise. (The Natalie character is a favorite among young audience members. I might even suggest that based on her honesty, her coping efforts and her growth through the play, she’s a good example for teens.)

In one of her funks, Diana asserts that “most people think they’re happy because they haven’t thought much about it.” Let’s hope that catchy saying doesn’t hold up in real life as it seems to for her. Besides depicting the effects of bi-polar disorder and its usually palliative treatment with meds and more drastic measures, the play ventures into other-worldliness. Diana observes that illnesses like hers are “not in the brain, but in the soul.” Maybe next to normal is saying that coming to grips with one’s own irregularities might be the real cure.

The ending of next to normal doesn’t bum you out, but it’s not exactly cheery either. Leaving the theater, my companion wiped a tear from her cheek. “I’m surprised I cried,” she said. “I’m not that kind of girl.” Well, neither am I, but I was dabbing at my eyes too.

“next to normal” runs through July 31 at Four Seasons Centre, Toronto. Info at: www.dancapproductions.com