“The Judy Holliday Story” – An Outline

Among the people I asked whether knowing the real-life characters portrayed in a play puts one at an advantage or a disadvantage in evaluating the piece, most, after reflection, said disadvantage, where my own opinion had come down during the opening night performance of The Judy Holliday Story at New Jersey Repertory Company. 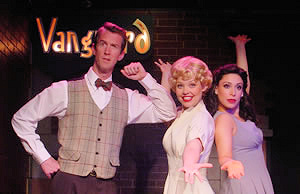 Bob Sloan’s episodic play is an outline of the life and career of the woman who personified the not-so-dumb blonde in Born Yesterday. Via 30-or-so anecdotal scenes, Judy advances from her mid-teens, ambitious to be a writer; through her Greenwich Village musical revues with Betty Comden, Adolph Green and Leonard Bernstein (no bios in this critique, just names); to her Broadway and Hollywood successes and travails; her romantic and political misadventures; and her untimely demise from breast cancer in 1965 at age 43.

The sketchy nature of the piece makes it possible to cover all the above, but only thinly. Despite the intensity of a game cast, two of whom play all the famous folk, one is left with tidbits about what Judy Holliday did, but little sense of who she was.

Besides skimming through imagined byplay with some big-name directors like John Houseman and Orson Welles, and such celebs as Katharine Hepburn, Tallulah Bankhead and Peter Lawford, the play returns several times to those Village revues. Intentionally lame, the ditties go on too long too often.

What works quite well are several segues, where vignettes begin at one time and place and switch mid-stream to another. The lead-in announcement to Judy’s Academy Award becoming her high school graduation is one such. Another is John Daly’s innocuous “What’s My Line” questioning morphing into a nasty House Un-American Activities Committee inquisition.

Pheonix Vaughn actually looks a bit like Judy, but she’s enforced by the text into a one-expression performance. Well, two maybe. If Ms. Holliday isn’t really happy about something, she’s really unhappy about something else. Ms. Vaughn is good at projecting both, but one longs for some in-betweens. She has a sweet singing voice, evidenced by portions of “Just In Time” and “The Party’s Over” from Bells Are Ringing, the 1956 Broadway musical that Comden and Green (and Jule Styne) wrote for Holliday.

If Judy’s abrasive mom really referred bitterly to Judy’s Born Yesterday co-star Paul Douglas as a ‘schmuck,’ I wonder where playwright Sloan might have learned that. If the line is his creation, it’s egregious overkill. As written by Sloan and played by Bonnie Black, the Jewish mother is distastefully stereotypical enough without that invective.

Catherine LeFrere plays all the other female characters; Adam Harrington the male. Nearly all of them, conspicuously identified by name, remain LeFrere and Harrington.

I knew personally only one of the 17 famous people represented in the play, but I was, and remain, familiar with all of their personas. Dorothy Kilgallen and Arlene Francis were not identical, nor were Houseman and Welles. Without resorting to outright imitation, Ms. LeFrere does simulate Katharine Hepburn nicely. What fun if some of the others were similarly evoked.

Mr. Harrington’s turn as Ms. Bankhead, with whom I appeared in summer stock years ago, double faults. In a silly turbaned outfit he creates neither the presence of Tallulah nor her easily suggested sound. (Um, lower your voice.)

As she has done admirably in the past, director SuzAnne Barabas makes lemonade of a so-so play. Many in the audience will likely come away with their thirst for a light summer quaff quenched. Just hearing the old-time names might satisfy the seniors among them, especially those who think Ziegfeld is pronounced as Ziegfield.