The press material for The Pretty Trap describes the play as Tennessee Williams’s “one-act version” of The Glass Menagerie with an 80-minute running time. Uh, uh on both counts. The play does offer a peek at the three Wingfields, who seem at first like the ones we know from Menagerie, but they develop, relate and end up quite unlike the ones in the later masterpiece.

The piece – “playlet” would not be inappropriate – conflates several recognizable Menagerie moments and more than a few of its later-written lines into its 45-minute running time. It opens with fussy Amanda (Katharine Houghton) and reluctant Laura (Nisi Sturgis) preparing dinner for Tom (Loren Dunn) and the Gentleman Caller (Robert Eli), who arrive after the play’s first third, about 15 minutes. 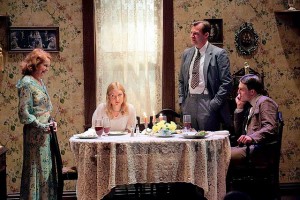 The middle third is the awkward dinner with Laura coaxed to the table. When the lights go out (Tom didn’t pay the electric bill here either), candles are lit, and Laura, sans limp but with glass unicorn, entertains the Caller while mom and Tom do the dishes. The play might have been the author’s outline for Menagerie, but it is in complete dramatic form, however short. The Pretty Trap is an agreeable little play. Familiarity with Glass Menagerie adds some heft to it, but it draws you in on its own. It is minor Tennessee Williams, to be sure; but it is Tennessee Williams.

We talked with two of the actors. “It’s a comedy,” said Ms. Houghton. And so it might be, in that, unlike Menagerie, the family recriminations are minimized and the ending is, well, different. A problem with that assessment lies in one’s familiarity with Glass Menagerie, which tends to stifle comedic aspects of Pretty Trap…at least until it’s over. All through the Gentleman Caller scene, for example, while he thaws Laura, one sits waiting for the other shoe to drop. (It doesn’t.)

Ms. Sturgis’s remark was more profound and, at first, elusive. “It’s what Tennessee Williams wrote before he got the courage to put Tom in the play.” Hmm…

In The Pretty Trap, Tom Wingfield is functional, bringing his friend home for dinner and then clearing out with mom. He’s well enough acted by Mr. Dunn, but he’s a far cry from the conflicted son and brother of The Glass Menagerie. There, narrator/character Tom is Williams’s alter ego, and based on that play’s trajectory, it took courage indeed to put himself – and his mother and sister – on the stage.

Dissecting and analyzing either play would serve no purpose. Doing so with Menagerie would make eyes glaze over (yours and mine), and parsing the psychological layers of Pretty Trap would require finding them first.

While there was Streetcar waiting in the wings, if the only thing Tennessee Williams ever wrote was the Laura/Gentleman Caller scene, he’d still deserve his vaunted reputation. The scene is shorter here, and, as noted, resolved differently, but as wonderfully acted by  Sturgis and Eli, it’s reason enough to see The Pretty Trap.