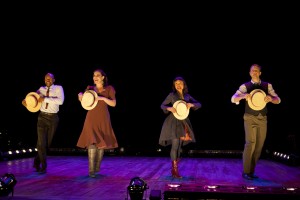 When Jacques Brel Is Alive and Well and Living in Paris premiered at the Village Gate in Greenwich Village in January, 1968, the Belgian-born, international concert, theater and film star was indeed alive and well and living in the City of Lights. At his death at age 49 in 1978, he left a trove of some 150 compositions (music, lyrics and commentary), about 25 of which, culled by Eric Blau and Mort Shuman, became the lengthy-titled retrospective, a cross between a concert and a revue.

In 2006, Two River Theater had success with a similarly constructed show, the Fats Waller musical Ain’t Misbehavin,’ for which they assembled an African-American creative team. Without a like effort to correspond temperament to presentation, Two River’s Jacques Brel, while intermittently entertaining, fails to capture Brel’s vision.

This Brel is a weighty affair. The songs, with rare exceptions, beg for simplicity in performance. Here, most are over done. Performed by four good singers, it’s as if someone, presumably scenic designer Daniel Ostling, making his professional directing debut, doesn’t trust the audience to ‘get’ the material. Too many numbers are ‘gimmicked up’ in one way or another. “Carousel,” for example, comes to a virtual dead end when attention is diverted from the powerful song to a strip of condoms that’s waved in the singer’s face. And “My Death” is sung from a rocking chair that rocks through the whole number, a directorial no-no. The show would be better served if Ostling exhibited the same restraint with the direction that he did with the minimal set design.

The songs, variously anti-war, pro-love, self-mocking, heartbreaking and funny, are supposed to gradually pull you into the world of the revered Brel. There’s no spoken dialogue and no apparent song-to-song connection, but preceding “My Death” with “Funeral Tango” re-defines arbitrary.

Among the performers, Forest McClendon shows some of the vocal power that earned him a 2011 Tony Award nomination (for The Scottsboro Boys); he’s a commanding presence. Andy Kelso, a young leading man type, comes across as…a young leading man.

Rona Figueroa is a pert, lively personality with a sharp edge to her voice that serves Brel best here, and Lindsay Mendez ‘acts’ the songs best – even when not singing, as in “Song for Old Lovers.” (But my goodness, Ms. Mendez has an iron clad case against costumer Jessica Ford.)

I suspect that the orchestra’s four instrumentalists, under the direction of keyboardist Greg Brown, are all accomplished musicians, but they do not, save for a few scattered measures, begin to evoke the Continental style Jacque Brel’s compositions.

At Jacques Brel in Stratford, Ontario in 2009, a man seated behind me was moved to tears several times and to an occasional burst of laughter. Two River audiences will find those reactions in short supply. “Brel’s language was French,” the Canadian man said, “but in his heart he was Flemish.” In Red Bank, his language and his heart are barely suggested.