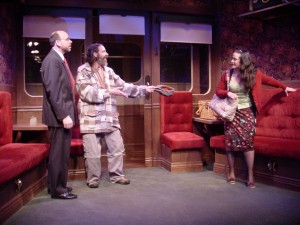 Hitchcock it ain’t, but John Biguenet’s play running at New Jersey Repertory Company in Long Branch, New Jersey through May 29 centers on a meeting of strangers on a train. It is an interesting play, which isn’t a cop-out. Many plays are not.

In Night Train, buttoned-up banker Alex (Michael Irvin Pollard) is comfortably settled in a first-class compartment on an all-nighter train ride from and to unspecified destinations. Max (Philip Lynch), a disheveled, scruffy-bearded refugee from second-class, plops himself down, uninvited, in Alex’s upscale digs. The two are as different in temperament as in dress. Max moves and chatters at 78 rpm; Alex functions at 33 1/3 LP.

Continuing that metaphor, Max plays Alex like a virtuoso. Prying into every corner of Alex’s life (with too little resistance even for a fiction that depends on just that), he stirs up doubts in Alex about his values, his job and, most significant as it turns out, his wife.

Enter Marta, a well-disguised (in type) femme fatale with a Slavic accent, which Maria Silverman affects very well, and a veneer of rustic innocence, which soon dissolves. Based on that sketchy outline, you could rightly imagine any number of scenarios; playwright Biguenet’s is as good as any and as predictable as most, which doesn’t make it bad, just, well, predictable.

Night Train has a split personality. At intermission, I commented that even though I was among the few who were laughing, I thought the play, which had begun in serious mode, had evolved into a comedy, with wife jokes and non-sequitors, many of which hit the mark. Both the playwright and the director agreed with that assessment.

But act two abandoned quasi-sitcom funny in favor of quasi-romantic sad, with a dose of quasi-preachy social commentary, leading up to an ending that, due to an awkward and waayy over-obvious symbolic device, takes waayy too long.

Everything mentioned is fixable, and a pretty good comedy-drama is lurking in Night Train. Like so many new plays, which inform the mission of NJ Rep, this one would benefit from a judiciously applied scalpel. The three actors are fine (Pollard is more subtle than I’ve seen him), and SuzAnne Barabas’s direction keeps things humming among three characters in a confined space.

Jessica Parks’s train compartment set is a beaut, as are Jill Nagle’s lighting and Merek Royce Press’ sound. Their collaboration evokes a real choo-choo. (An occasional sway by the actors contributes as well.)

There is, intentionally or not, a variation on the “Chekhov’s gun” principle, which states that if a gun is displayed in the first act, it must go off in the second. The item here isn’t a gun, and it’s also not the second-act returnee. What is, or are, however, are key to that less-than-snappy ending.

(Why NJ Rep isn’t using Buddy Morrow’s iconic 1952 jazz classic “Night Train” for intro, intermission and chase music, is a real mystery. Beyond just the title, the composition fits the playwright’s intention to a tee.)