In April 2011, Phoenix Productions turned Annie, if not upside down, at least on end. Annie is usually driven by the orphans – Annie and anywhere from six others, which the script indicates, up to…well, Phoenix had at least 25 in 2002. I lost count.

Usually, the little girls don’t steal the show; they are the show. Sure, there might be an imposing Daddy Warbucks and a raucous Miss Hannigan, but generally the adult characters fill in between the kids’ scenes.

Not so at Phoenix, where Annie had a two-week run in April 2011. Here, the principal adult roles were played as well as I’ve seen, including at the professional Paper Mill Playhouse in 2002.

To give them their due, the Phoenix orphans were a winning gaggle. They sang and danced with verve, and their sparkly smiles allayed any fears of a power failure. They were all cuties and stage-wise performers. You couldn’t fault the Annie of Carly Nelson, who sang the Anthem of Hope “Tomorrow” with near-religious fervor. Her vocals on “Hard Knock Life,” and “I Think I’m Gonna’ Like It Here” were also stand-outs. She’s an actress to contend with.

But Annie is 11-years old, and Carly’s days of passing for 11 are long gone. She might be 13, as was the original Annie, Andrea McArdle, but she appeared 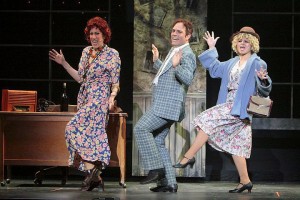 A trio of hoofers on "Easy Street"

older, with a young woman’s appearance and, before donning Annie’s curly-red mop, a mature hair style. She’s nearly as tall as Tom Frascatore’s Daddy Warbucks, which skewed some of their scenes together. That noted, the story holds up and the under-rated score by Charles Strouse (music) and Martin Charnin (lyrics) has aged well.

About those adults: Frascatore didn’t just look like Warbucks, his bearing and demeanor evoked a believable Depression-era billionaire. The actor could have tightened up some ‘thoughtful’ pauses, but the relationships between Warbucks and everyone else all rang true – as did Frascatore’s powerful baritone. (The “NYC” solo intro was solid.)

Thankfully, director Gary Shaffer, he of the deft comic touch, de-emphasized the orphanage headmistress’s drunkenness, and we have Lauren J. Cooke to thank for a Miss Hannigan who was farcical without being absurd. She’s villainous, sure, but likeable too. Her petty-gangster brother Rooster and his moll Lily were played exactly to type by Joe Caruso, reprising his role from ’02, and Jennifer Townsend, a Shore Regional High School senior who, for my money, can reprise the role anytime she wants. She can vamp with the best of ‘em. Cooke, Caruso and Townsend did a spiffy “Easy Street” soft shoe.

Grace Farrell, Warbucks’s personal assistant, can be a perfunctory role, serving mainly to push the plot along. Not here, by a long shot. Jessica Lopez, an attractive leading lady with a gorgeous voice, injected some simmer into Grace’s hinted-at romance with Warbucks. And who knew that Drake, the butler, was such a droll comic? Stephen Boyd transformed him from plain on the page to very funny on the stage.

Annie features one of the most wonderful cameos in Musical Theater, when Star-To-Be bursts into the “NYC” number. In 32 rapturous bars, she captures the lure of the City for young performers who come from all over to make it big. At Paper Mill in ’02, Montego Glover (B’way’s Memphis) played it; in the 1997 Broadway revival, it was Sutton Foster. (If you need her ID, you’ve been living under a rock.) I don’t know if Kristen Diebold will ever star on Broadway, but her Star-To-Be was why the role was written. For a precious few minutes, Diebold shone bright.

Another shout-out to Shaffer; his directorial range and talent play catch-up with each other, and we’re the winners. Nicole DeVincenzo’s choreography made her dancers better dancers and her non-dancers dancers. The tech – sets (Ashley Cusack), costumes (Jacquie Revier), lighting (Anthony Calicchio) and L & M Sound – all came together to serve the show. Congratulations to producer Joe Vecchio on a thoroughly entertaining Annie.