Live With “Our Town” in Holmdel 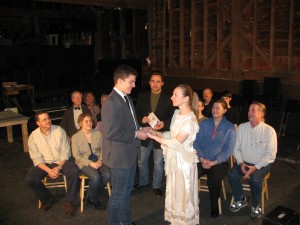 The text of Our Town begins, “No curtain…no scenery…an empty stage in half-light.” Thornton Wilder’s magnificent 1938 Pulitzer Prize-winning play is the very definition of “less is more.” At Holmdel Theatre Company, even less is even more. Taking their cue from a recent off-Broadway production that reduced the play to a virtual living room display, Holmdel plops Our Town right in your lap. With a large cast of non-professionals, including some high school students, the often-misunderstood American play has never been more affecting. More polished, perhaps, but never clearer in intent or more emotionally involving.

The play is more than the sum of its parts. In three compact acts, it reveals the cycle of life in small-town New Hampshire from 1901 to 1915. Among the beauties of this production is that the characters, whom we come to know and, okay, love, grow and age only through what they say and how they relate. There’s no attempt by the Holmdel cast to ‘act’ any older; no changes in voice or posture or even, over the 15 years, costume, because there are no “costumes,” except for the semi-dress wedding scene..

In street clothes, jeans and such, the actors play in and among the audience, which, btw, remains in full light. The attitudes and values that prevailed at the turn of the twentieth Century are evoked by this cast’s understanding of and immersion in the subtleties of Wilder’s deceptively simple story. Rarely is a director’s guidance as clearly on-target as here: Michael Kroll has overlooked nothing. (No forced New England accents – what a relief!)

It is not an oversight that no one actor’s name appears in this review. Citing the leading players would slight the contributions of some who appear only briefly. One example makes the point: When, near the end, Emily, a leading character, exchanges a brief, meaningful eye-lock with her brother Wally, who has maybe three lines, they become momentary co-stars.

This is an Our Town to cherish. Get your hankies out for this one, folks.

Through April 10 at Duncan Smith Theatre on the campus of Holmdel High School on Crawfords Corner Road. Thurs, Fri and Sat at 8pm. Adults $22; seniors $17; students $12. More info at www.holmdeltheatrecompany.org