These are the ninth annual Normy Awards for achievement in Monmouth County’s excellent community theaters. We saw 18 plays at 12 different community theaters in 2005. Measured against even professional fare, much of the local stuff is darn good. Here’s some of what and why…

Best Musical By a Rumson Stockbroker

Joe Simonelli’s entertaining and timely RomanceDotCom, at First Avenue Playhouse, edged out the competition. Joe wrote the music, lyrics and book and played bass in the pit. He did not serve the chocolate cake at intermission, but it’s rumored that he did bake it.

Best Tough Guy Performance:  Was that Humphrey Bogart at Over the Rainbow Productions’? Nah…it was Michael Dalberg channeling Bogie in Woody Allen’s Play It Again, Sam and earning a Normy for the role. (You got a problem with that?) 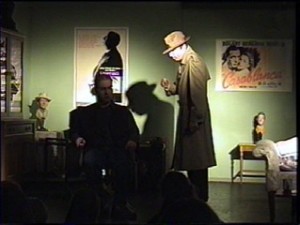 Best Old Time Comedy Guy Performance:  Did Sid Caesar make the rounds of Monmouth County this year? Nah again…it was Sal Giacchi and Bill Rogers in productions of Neil Simon’s Laughter on the 23rd Floor at Phoenix and Monmouth Players respectively.  The directors deserve Normys too, for putting the nifty ensembles together: Jason Summers at Phoenix, and Monmouth Players’ co-directors Rebecca Harris Flynn and Paul Renick.

The (Un)dress for Success Normy: Last June at Shadow Lawn Stage, Steve Martin’s racy comedy The Underpants starred Gisela Chipe, a (fully clothed) charmer with a Normy-winning smile. In what might be a fashion statement, First Avenue Playhouse was doing Don’t Dress for Dinner while The Underpants was on (were on?)…and on the un-dress subject, Phoenix is doing Hair in September.

Ask and ye may receive: In First Avenue’s Don’t Dress For Dinner, Katie McKenna’s ditzy character Suzette was mistaken for a cook, someone’s niece and someone else’s mistress. At one point she faced the audience and said, “I should get an Oscar for this.” We can’t do that for character Suzette, but actor Katie gets the rarely bestowed ‘Comic Perfection’ Normy. 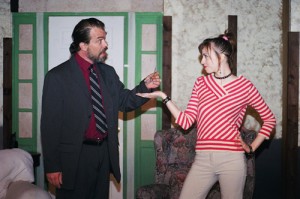 Katie McKenna and Michael Chartier in "Don't Dress for Dinner"

Shameless Flirting Does Not Win Awards: In a flagrant attempt to influence the voting, Dori Erickson flipped her boa seductively at the Normy nominating committee during her Mae West impression in Starving Artist’s Godspell. And so, Dori, in spite of your excellent singing, spiffy dancing and evident charms: No Normy for you! [Note in 2011: What was I thinking? A retroactive Normy to you, Dori.

The “I Scream, You Scream, We All Scream” Award

Previously known as the ‘Best Intermission Ice Cream Cone’ award, this Normy is hereby awarded in perpetuity to Starving Artists at Day’s. Even if someday another theater company does its shows on the porch at Day’s Ice Cream Parlor in Ocean Grove, Starving Artist owns this Normy, now and forever. [Note in 2011: Wish they’d do another there.]

After careful consideration, this Normy goes to Brookdale’s Summer Shakespeare Ensemble for their delightful Midsummer Night’s Dream, performed on a campus lawn and at Red Bank’s Riverside Gardens. Director John Bukovec is a back-to-back Normy winner (As You Like It in 2004), and we hope he threepeats in ’06. The play’s Best Actor Normy is a 20-way tie, but we can’t resist honoring Julianna Stanford for her spritely Puck. (Spritely – get it?)

Best Indoor Musical at a University

For a few evenings last February, Monmouth University’s Lauren Woods Theater was a Cabaret. Freshman Nicole Catogge was an admirable Sally Bowles in her very first show and the whole cast brought pre-WWII Berlin’s ominous decadence to life. A Cabaret Normy goes to Lynne Schaeber for her raunchy choreography and the barely clad Kit Kat girls, who performed it with, um, cheeky abandon.

A Special Normy to Someone Who Won’t Read About It

This one goes to R. D. of Atlantic Highlands, who canceled a Two River Times subscription after a so-so review. Turns out R.D. was in the play, but not mentioned in the review, no doubt the real reason for the cancellation. [Maybe R.D. will see it here? Yeah, right.]

Is Winning Every Year Boring?

Let’s hope not, because the ‘Best Use of Tax Dollars’ Normy once again goes to Monmouth County Park System’s Barn Theatre.  Produced (and often directed) by Angela Flynn Knox, the Barn’s musicals are a summer tradition. This year’s Pippin was a pip. The Park System Barn is a Monmouth County treasure and so is Angela.

Best Revival of a Revival

It was round two for Kelly Bird’s spiffy The World Goes ‘Round, this time at Holmdel Summer Theatre. The revue of Kander and Ebb show tunes earned an award in 2001 at Eatontown Playhouse and gets another this year. Kelly’s a triple threat: producer, director and performer. Only one Normy, girl, but triply deserved.

Phoenix Productions mounted four musicals this year: Superstar, The Wiz, Pirates of Penzance and Aida, a Normy-worthy accomplishment in itself. David Pacheco choreographed the three we saw (missed Superstar). He also directed The Wiz and acted in Aida. Take a breath, David! And Linda Erickson designed all the costumes – for ancient Egyptians, 19th Century pirates and Munchkins, for heaven’s sake. Normys to both these essential contributors.

In Case You Thought We Weren’t Paying Attention…

There are no small roles? Of course there are. But don’t tell that to Loresa Lanceta, poignant as a sacrificial slave girl in Aida, or to David Kern, who was the soon-to-score King in Underpants.  Normy Awards go to Loresa and David as representatives of all the loyal, dedicated and underpaid (in the range of $0) guys and gals who give their time and talent to our area’s community theaters.