This year we reviewed 17 productions at 13 different venues, many of such high quality that the awarding of the eighth annual Normy Awards was an unusually tough job for the judges. Well, the judge.

The Shrewsbury Players staged Towards Zero. It’s the only play Christie wrote with a co-author, and there’s a reason you never heard of it. The Players get a Normy for scoring a narrow victory over this convoluted mystery.

Best sword fight a trios:  Lovely Wanda Toro grabbed a blade and jumped into the climactic fray between adversaries Christopher Pica and Robert M. Tilley in Phoenix’s Scarlet Pimpernel. They get the Action Normy, and David Pacheco gets one for staging the realistic duel.

Political Action Normy goes to Spring Lake Theatre Company’s production of Gary Garquhar (music) and Martin Mannion (concept, book and lyrics)’s Rose Garden Affair. The show, about a bungling President, gets a Normy for originality; the song “Calm, Upbeat and Positive” deserves an award of its own.

Best young cast in a new old musical: Crazy For You is “the new George Gershwin musical.” If the composer could have seen the Shore Regional High Schoolers singing and dancing to “I Got Rhythm” and the rest of the great score, he’d write them another show!

Believe It Or Not: Five actors with same name in one play!

Sal Giacchi played five roles in On the Town at The Barn in Thompson Park. Each one was different, and each was a sharp comic character. As usual, Giacchi came through with terrific timing and an infectious sense of fun…times five. (Only one Normy, though, Sal.) 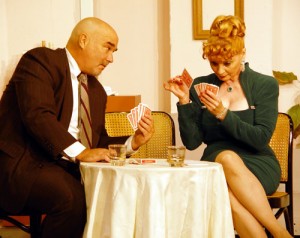 Classic tragedy resurrection award: Holmdel Theatre Company has little competition for this Normy. They presented Jean Anouilh’s adaptation of Antigone, Sophocles’s Greek tragedy from circa 440 B.C. That pre-dates Shakespeare by about 2,000 years!

Most intimate performances by actors who didn’t even look at each other:  In A. R. Gurney’s Love Letters, a man and a woman sit at opposite sides of the stage, and read from letters they wrote to each other. It isn’t much of a play, but Don Silva and Cynthia Granville turned it into one in Stage East Ensemble’s fine production. The actors never moved, but the audience was.

Best play in a large park: As You Like It is set in the forest of Arden, and Brookdale’s director John Bukovec staged it on a great lawn with a natural tree backdrop. The setting enhanced the play, and as Rosalind, Shakespeare’s longest female role, Audra Mariel Talierico was captivating.

Best play in a small park: Kennedy Memorial Park in Asbury Park was the perfect setting for Edward Albee’s Zoo Story and John Guare’s Loveliest Afternoon. [2011 note: Director Stephen Waldrup had “absolute faith in the revival of Asbury Park” – well placed faith as it turned out.]

Most seductive performance atop a piano in fishnet stockings by someone whose name begins with ZYW:

Now who would that be? In Phoenix’s Burlesque, Danielle Zywan sang “Take Me Out To the Ballgame” dressed in a Mets jersey and little else. Unlike that hapless team, Dannyelle’s a 2004 winner.

Best intermission ice cream: NENAproductions wins this Normy again. The side porch of Day’s Ice Cream parlor in Ocean Grove is a neat little theater space, and NENA’s Once On This Island was a perfect fit. [2011 note: Wish they still did shows at Day’s. The acoustics in their Ocean Grove venue renders shows un-reviewable.]

“Why the chicken crossed the road” Normy

Last June The Music Man played the Barn in Thompson Park while Premiere’s Anything Goes was at CBA across Rte. 520. One small walk for mankind…