There isn’t enough facial hair in the world to disguise Esther’s Moustache, Laurel Ollstein’s “new comedy” at New Jersey Repertory Company. Its tasteless content is so out of touch with any sense of satire, subtlety or sensitivity that any cosmetic effort would be a waste.

It’s not that satirizing or lampooning religious, ethnic or racial characteristics is off limits; Lenny Bruce, Richard Pryor and Mel Brooks perfected the genre.  But coarse, senseless mockery by less-than-capable practitioners offends rather than amuses, embarrasses rather than entertains.  Esther’s Moustache is poorly written, sloppily directed (by the author) and, within the bounds of the material, carelessly acted.

The would-be commentary on modern Jewish identity begins with Raunch Magazine cartoonist Maddie’s (Catherine LeFrere) grandmother Esther paying Maddie a visit, wheeling her travel trunk behind her, intending to stay for a while (the two-act 110-minute play seems much longer).  Esther, played, for some unknown reason, by a male actor (Jim Shankman) in drag, proceeds to force Maddie into a denial guilt trip.

It doesn’t matter how, but Maddie ends up with a non-Jewish boyfriend (Burt Grinstead), whose German accent, as dreadfully rendered as is Esther’s Yiddish tone, is enough for Esther to spout off, in a manner meant to amuse the audience, about Nazis. That leads to some intended humor about Jews in ovens and a knee-slapper with a fantasy doctor named Mengele, who is explained with “you know, the Holocaust, horrible medical experiments.” (I swear I am not making any of this up; playwright Ollstein did.) 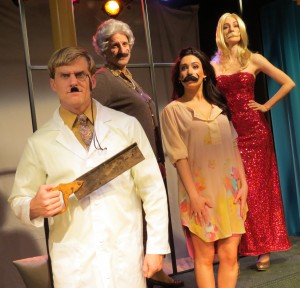 In what could be an effective gimmick in more capable hands, Maddie’s graphic-comic creation, the ‘goddess’ Lilith (Uma Incrocci), struts her stuff on a platform at the rear. In a clingy red evening dress, the really slender Incrocci is attractive enough, but hardly a goddess. (And in case anyone doesn’t get it, Lilith quotes from the prop book “Jewish Stereotypes for Dummies.”)

For all its concentration on supposed jokes about Jews, there’s a dig or two about ‘schwarzes’ (a Jewish-inflected euphemism for the n-word), and ‘fageles’ (a pejorative reference to gays).  And lest this be the first new play since Cinderella to eschew the f-word, Lilith invokes it several times – not as an expletive, but in reference to the act, a refreshingly welcome change from the norm.

Somewhere in Esther’s Moustache there’s a point to be made about coming to grips with one’s family history (dad committed suicide, referred to as “a Jewish no-no”) and accepting one’s own identity, but any small worthwhile gem is obscured by its unsavory wrapping.

For the record, I am against any form of censorship, and while I question NJ Rep’s judgment, I would fight (or at least argue over a martini) for their right to produce this play…as well as your right to stay home from it.