Scene on the diamond… 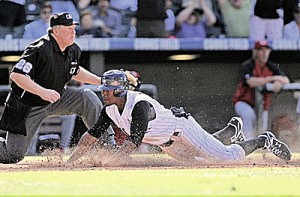 From time to time you’ll see a sports item here. This one is adapted from a piece written for The Champion newspaper in Decatur, GA. We’ve followed the career of Colorado Rockies prospect Chris Nelson since he was drafted in 2004. (Chris is the son of 30-year close friends . We’re talkin’ family-close.) Sunday, May 30: Chris Nelson got the call last night. As of today he’s in “The Show” and the necktie is out of storage!

Most Major League baseball teams require players to wear neckties when they’re traveling to and from ballparks. So when Colorado Rockies manager Jim Tracy told Chris Nelson to “keep a tie in your luggage” while he’s playing for the Triple-A Sky Sox in Colorado Springs in 2011, it was more than just fashion advice.

Nelson, 25, was the Rockies #1 draft pick in 2004 (9th overall) out of high school in Decatur, Georgia, where he had been named a first-team All American by both Baseball America and USA Today and was Louisville Slugger’s High School Player of the Year for Georgia. (As a high school senior, Chris batted .582 with eight homers, 36 RBI and 25 stolen bases.)

Drafted as a shortstop, Nelson has been groomed to play second base – and some third – beside Troy Tulowitzki, the Rockies’ all-star shortstop who is signed through 2020. He’s playing all three positions for the Sky Sox.

Judging from his brief but sensational stint with the Major League Rockies in 2010, he’s a short hop from the Major League club. He appeared in 17 games at the Major level, batting a very respectable .280, but it was one electrifying play that earned Chris Nelson a spot in the Rockies record book. On September 9, 2010, he stole his first Major League base, a “straight steal” of home in the eighth inning against Cincinnati to give the Rockies a 6-5 lead.

It was the first straight steal of home in the Rockies 18-year history, though there had been 14 other steals of home. The difference is significant: the other 14 involved another player attempting or threatening to steal second base from first on the same play. Nelson’s daring steal occurred with no back-up steal attempt. According to the Elias Sports Bureau, he became the first Major-Leaguer with a go-ahead steal of home in the eighth inning or later since a Cleveland player did it in 2003. During 2011 spring-training in Phoenix, Chris said over a hundred fans told him that his steal was the most exciting event of the 2010 season at Coors Field (Denver home of the Rockies).

Chris Nelson has all the tools. He can play three infield positions, and he hits with more power than any other of the Rockies backup options. As for the move from shortstop to second base, while he acknowledges that there’s “a little bit more footwork at second,” he handles the position confidently. “The infield is the infield to me,” he said.

Nelson sees the distance between Colorado Springs and Denver as just another short step in a career path that began when he was very young. “Baseball has been my whole life since I’ve been growing up,” he said. He’s looking forward to unpacking that Major League necktie very soon.