You need not be closely familiar with William Shakespeare’s “Romeo and Juliet” or with his personal life to enjoy “& Juliet.” References to both are deployed liberally throughout, but the Broadway show is a musical and visual delight on its own. (Among the tidbits you may never have considered, Anne Hathaway, Shakespeare’s wife, is not happy with the bequest of his “second best bed.” Her name also takes a hit.) 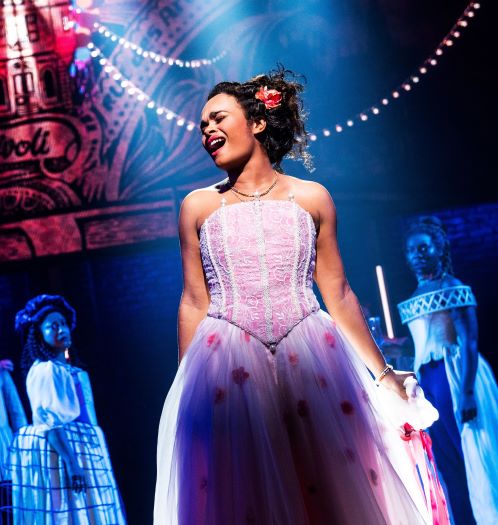 Lorna Courtney is Juliet (no & about it) [Photos: Mathew Murphy]

The same goes for the score, a jukebox-full (maybe over-full at 30) of songs by Swedish songwriter/producer Max Martin: covers, or re-purposed, recordings by Britney Spears, Katy Perry, Backstreet Boys, and others. (Celine’s “That’s the Way It Is” and The Boys’ “Everybody” are among the prominent insertions.)

At Anne’s urging (Betsy Wolfe, delectable in the role), Will, very much alive and perfectly underplayed by Stark Sands, quills a revision of his classic tragedy, in which Juliet (Lorna Courtney, a starburst), does not die. In Anne’s take on the situation, “Maybe she doesn’t kill herself just because he killed himself?” And so it is that Juliet goes on to a post-Act V life. One not without complications, however, with a new, over-eager beau (cue: “Oops…I did it again”) and the resurrected Romeo challenging Juliet’s newfound independence. 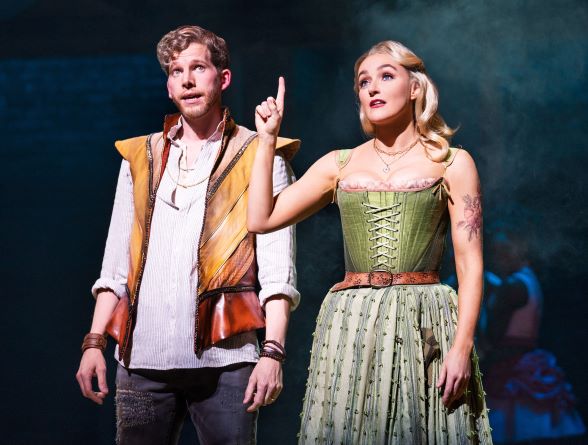 Elizabethan power couple (him not so much): Will Shakespeare (Stark Sands) and Anne Hathaway (Betsy Wolfe)

Carry-overs include Juliet’s Capulet parents; a Benvolio sighting; and some cameos from other plays: Imogen, Viola and Sly all pop up. That Juliet’s jilted beau, Paris, was slain in the original would not necessarily deter inventive book writer David West Read from re-introducing him here. He does not appear, however, but his name spurs an ‘Aha’ moment and off Juliet goes to Paris, chaperoned, sorta’, by her feisty Nurse, finally given a name, Angelique (a feisty Melanie La Barrie). Also along for the Renaissance adventure: Juliet’s non-binary bestie May (cue: “I’m Not a Girl, Not Yet a Woman”), well played by understudy Michael Iván Carrier at my performance, and Anne Hathaway, who inserts herself as Juliet’s second-best friend. (And a welcome presence she is, with Ms. Wolfe’s whip-snap comic timing aboard.)

Juliet’s adventures in the City of Light include an awkward Juliet/May/Francoise triangle (cue: “I Kissed a Girl”) and a romantic partner for Angelique, in the person of operatic stalwart Paulo Szot, for whom “& Juliet” would be a comedown from “South Pacific”’s Emile de Becque, except that he is clearly having a great good time here. 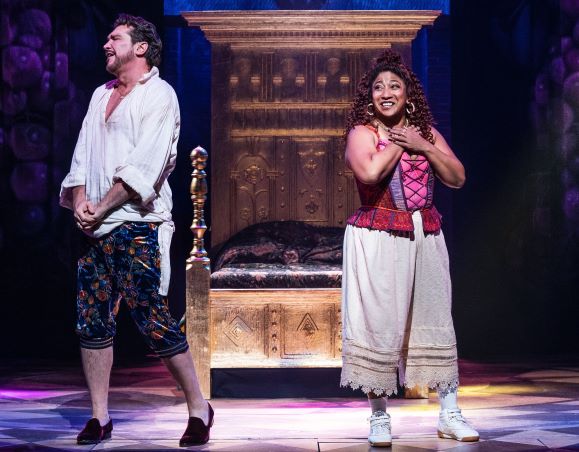 As are they all; as did I; and as, I suspect, will you. With perfectly paced direction by Luke Sheppard; Jennifer Weber’s nifty choreography; Bill Sherman’s tight orchestrations; Soutra Gilmour’s glittery set design and Ms. Courtney’s Juliet swinging from a chandelier: What’s not to like? 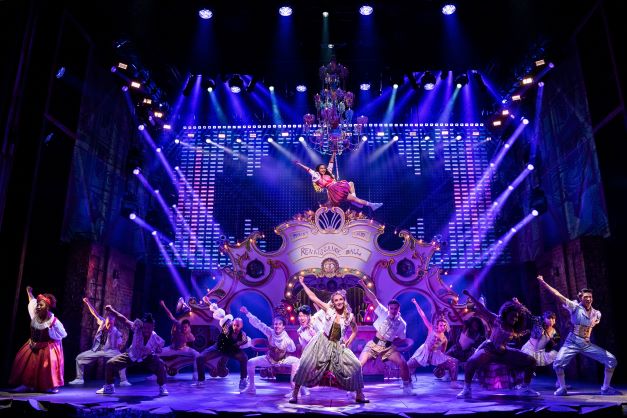 Revealing that it ends with an assertive Juliet is no spoiler: the feminist signals are there from the start (anachronisms be damned). “Why is it now ‘Juliet and Romeo’ and not ‘Romeo and Juliet’?” asks a pride-wounded Romeo at the end. “Oh,” replies Juliet, “isn’t it obvious? ’Cause I WANT IT THAT WAY.”

And a shout-out to the hardest working performers on Broadway: the musical ensembles, represented by Tiernan Tunnicliffe, making her Broadway debut in “& Juliet” (and understudying Anne). We sat next to her brother, who was as proud as you can imagine. Here’s to many more Broadway shows, Tiernan.