A Jug of “Wine in the Wilderness” and Thou: Perfect Together

If you want to know what a stage director does (or can do) for a play, you might want to first read Alice Childress’s “Wine in the Wilderness” and then get yourself to Two River Theater in Red Bank, New Jersey, where the play runs through November 6.

The relatively short play is an entertaining one-sitting read; the plot is linear and the characters well defined. What director Brandon J. Dirden has done with it is nothing short of transporting. Blessed with an impeccable cast and top-notch production values, the whole is much more than the sum of those estimable parts. I had never seen “Wilderness” before (it is hardly a perennial), but I cannot imagine a finer mounting. Featuring a dazzling performance by Crystal A. Dickinson, the production mines perfectly its giddy fun, emotional poignancy and timely (then and now) social commentary. Its art-centric references (the lead male is a painter) resonate with unpretentious folk-poetry; its relationships are multi-layered; and its considerable humor lands with bulls-eye consistency. The playwright could not be better served. 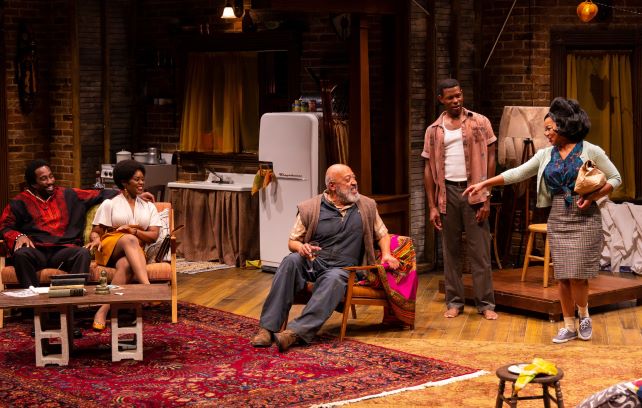 If Alice Childress had agreed to tone down the content of “Trouble in Mind,” her 1955 play about racial disparities in the theater community, she would have been the first Black woman with a play on Broadway. When she refused, the white would-be backers pulled out, ceding that distinction to Lorraine Hansberry and “Raisin in the Sun” a few years later. Ironically, while “Raisin” is a perennial, “Trouble in Mind,” which finally reached Broadway last year (and had a run at Two River in 2014), is tied for sixth place on American Theatre Publication’s list of most produced plays so far in the 2022-23 season. (Lynne Nottage’s “Clyde’s” heads the list.) Ms. Childress, a playwright whose time has (finally) come, died in 1994 at 81.

The title “Wine in the Wilderness” comes from a verse in Omar’s Rubaiyat:

Here with a Loaf of Bread beneath the Bough,
A Flask of Wine, a Book of Verse—and Thou
Beside me singing in the Wilderness—
And Wilderness is Paradise enow.

Bill Jameson (Korey Jackson)’s triptych depicting three stages of Black womanhood is two-thirds finished. (What seems an educate-the-audience device, Bill explaining ‘triptych’ to another character, becomes a pivotal plot point.) Paintings of “Black girlhood” and a regal African beauty are completed; all Bill needs now is a middle model who exemplifies “What society has made of our women. As close to the bottom as you can get…ignorant, unfeminine…vulgar…a poor dumb chick…there’s no hope for her.” Enter Bill’s friends, married-couple Sonny-Man (Ricardy Fabre) and Cynthia (Brittany Bellizeare), with Tommy (Ms. Dickinson) in tow: Tommy, who seemed right for Bill’s project when they met her in a bar. 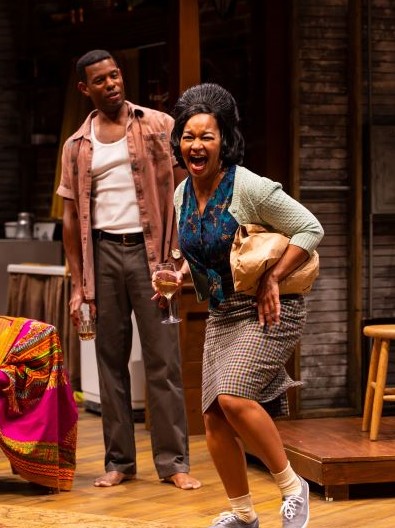 Korey Jackson and Crystal A. Dickinson as Bill and Tommy early on…

What develops over the ensuing ninety minutes is in some measure predictable. But how it happens, how the characters inter-relate and grow, is revealed in unexpected encounters and reactions. Assimilated Cynthia advises Tommy to learn to let men open doors for her. “What if I’m standin’ there and they don’t open it?” is Tommy’s defiant rejoinder. And Sonny-Man learns the distinction between calling her “the” sister and “my” sister. “Ain’t no we-ness in your talk,” Tommy chides him.

Dirden and the actors explore every nook and cranny of the play. Dickinson’s Tommy, whose full name is another plot point, comes on like gangbusters, in a performance both full out and firmly under control. Tommy’s relationship with Bill is at the center, but her scenes with Cynthia and with Old Timer (Keith Randolph Smith), whom Tommy greets with “How are you, Mr. Timer,” are significant – and splendidly acted all ‘round. Tellingly, Tommy draws every eye during the satisfying final scene in which she speaks not a word. 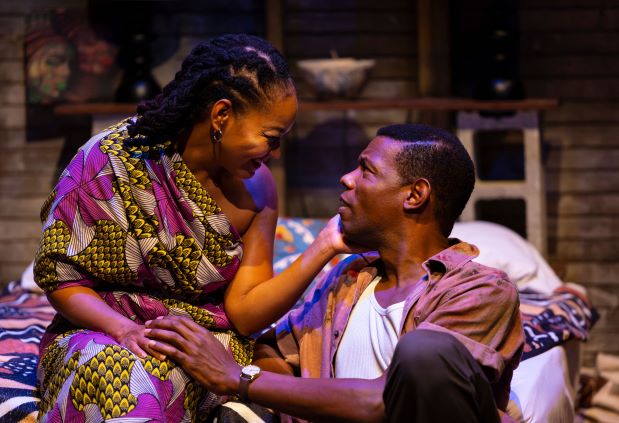 “Wine in the Wilderness” is firmly of its place (Harlem, New York City, USA) and time (The summer of 1964 on the night of a riot), but it is not dated. What we thought we knew back then is what we think we know now. The perception that Alice Childress was ahead of her time is not without merit, but like August Wilson’s, what makes her plays seem prescient is that time has changed so little, if at all. “Wine in the Wilderness” is a dose of optimism. If you don’t fall in love with Crystal Dickinson’s take on Alice Childress’s Tommy, you’ll be the only one.