Odds and Ends on “Death of a Salesman”

This piece is prompted by the current Broadway revival of Arthur Miller’s “Death of a Salesman,” which I am scheduled to see on October 12. Neither a review nor an analysis, it is just some thoughts on time spent with the play.

Since its premiere in 1949, where it won all six of its Tony Award nominations (and the Pulitzer Prize for Drama), “Death of a Salesman” has had four Broadway revivals, all of which I am fortunate to have seen: in 1975 with George C. Scott as Willy Loman; 1984 with Dustin Hoffman; 1999 with Brian Dennehy; and 2012 with Philip Seymour Hoffman.

Not yet a full-time critic in 1984 (I held a sales job), I was nonetheless invited by the Asbury Park Press to review the Dustin Hoffman production, based on having played Willy’s son Biff at the Asbury Playhouse years before, with Vincent Gardenia as Willy, Janice Mars as his wife Linda, and Bernie McInerney as other son Happy. 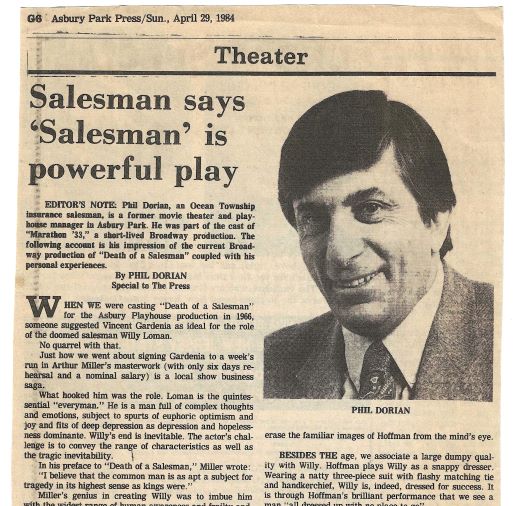 Heading of my review of the Dustin Hoffman production in the Asbury Park Press: April 29, 1984

The Dustin Hoffman “Salesman” was re-staged a year after it had closed on Broadway (after 91 performances) for the express purpose of filming it. That 1985 film, which, according to the NY Times, was “created closely with Miller,” is streaming on several platforms, including for free on Amazon Prime.

My April 29, 1984 Press article led with comments about how my Playhouse producing partner Barbara Ley and I had enticed well-known actor Vincent Gardenia to accept the role despite a short rehearsal period (six days!) and an Equity-stock salary. His father, who had recently died, had played Willy Loman in Italian, and Vinnie came to Asbury Park in memory of his father. (Our director Gennaro Montanino’s Italian heritage didn’t hurt our cause.) 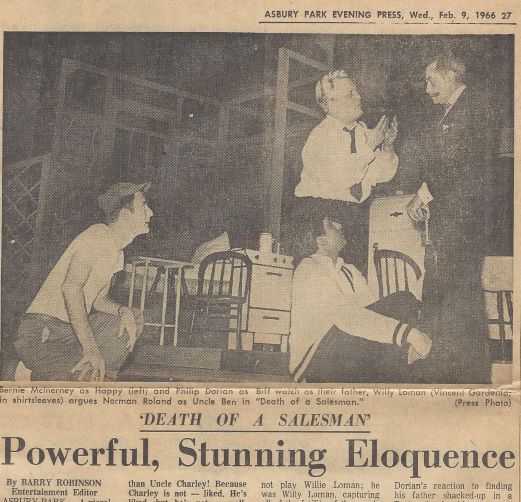 Photo that appeared in the Asbury Park Press on February 9, 1966 with review of the Vincent Gardenia production. Bernie McInerney as Happy, left, and me as Biff on floor while Willy (Gardenia) appeals to his brother Ben (Norman Roland).

My Dustin Hoffman column discussed the play in general terms. How everything about it is common. How there is nothing exciting or dramatic about Willy’s career; even the selection of Willy’s traveling-sales territory, Rhode Island and other New England states, is part of the lower-case construction of the play. Could anyone imagine Willy calling on buyers in Chicago or Dallas?

That production was directed by Michael Rudman, and there was significant praise for Dustin (my “brilliant performance” might have been a bit over the top) and for the supporting cast. Kate Reid, wonderful as Linda, was overcome with tears at her Brava! curtain call, and John Malkovich and Stephen Lang were both strong as Biff and Hap.

The filmed performance, directed by Volker Schlondorff, retained the stage cast, with the exception of David Huddleston, who was replaced by Charles Durning as Charley. (It amused me to note that a few years earlier, Durning had proposed marriage to Dustin Hoffman in “Tootsie.”)

Dustin Hoffman was cast against type. “I’m fat. I’m – very foolish to look at,” Willy tells Linda, bemoaning someone’s “walrus” remark. (Cue suspension of disbelief.) Age-wise, though, while Miller specifies that Willy is “past sixty years of age” (Linda pinpoints it at 63), Dustin, at 47, was hardly an anomaly. George C. Scott was 48 in 1975, and while Brian Dennehy was 61 in ’99, Philip Seymour Hoffman was 45 in 2012, and Lee J. Cobb had originated Willy at age 38. (The current Willy, Wendell Pierce, is 58.)  Lee J. Cobb lost the role in the 1951 commercial movie to Frederic March because of his, Cobb’s, past Communist Party affiliation.

[After being ‘outed’ by Larry Parks in ‘51 and holding out for two years, Cobb capitulated to the House Un-American Activities Committee (HUAC), naming twenty other former Party members. That cooperation cleared him to work again and he went on to appear in scads of movies, including his Oscar-nominated role as Johnny Friendly in “On the Waterfront.” Written by Budd Shulberg and directed by Elia Kazan, two other ‘friendly’ HUAC witnesses, “Waterfront” is an apologia for caving. Arthur Miller, who refused to cooperate with HUAC, illustrated his more admirable stance a few years later in “The Crucible.”]

Other notables of my Willy Loman sightings have included my close friend and former producing associate Paul Barry at New Jersey Shakespeare Festival in 1991; one at Paper Mill Playhouse in 1998 with Ralph Waite, with whom I had appeared in “Marathon ‘33” on Broadway; and, in 2015, Avi Hoffman’s innovative off-Broadway take: in Yiddish with unnecessary English super-titles.

Finally – initially, really – there was my introduction to the play in the 1950s: As a freshman at U Penn I was asked by seniors who were planning a production (off-campus due to the university’s then-ultra-conservative bent) to read for and then play Willy’s neighbor Charley. Cast members from that decades-ago “Salesman” are still among my closest friends.

In his prologue to “Death of a Salesman,” Arthur Miller wrote “I believe that the common man is as apt a subject for tragedy in the highest sense as kings were.”  During the requiem, Miller has Charley declare “Willy was a salesman. And for a salesman, there is no rock bottom to the life…A salesman is got to dream, boy. It comes with the territory.” The upcoming revival is ground-breaking in that the Loman family are portrayed by Black actors. But it will still open with Willy’s fatigued “Oh boy, oh boy” sigh and close with Linda declaring at Willy’s graveside that “We’re free and clear.” The more things change, the more they stay the same. 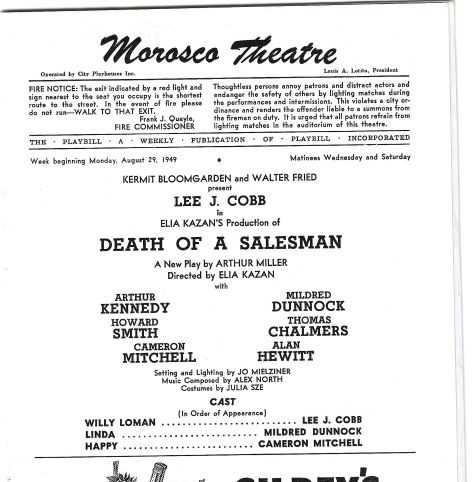 Original Playbill from the week of August 29, 1949. Gifted to me from a friend who found it in a secondhand desk’s drawer.