Perfection in Two Acts: “Into the Woods” on Broadway

It is fascinating to imagine the processes that went into mounting the Broadway revival of “Into the Woods.” Not only Stephen Sondheim’s exquisite music and lyrics and James Lapine’s unifying book – those are givens. No, I mean the journey from page to stage that led to the most brilliant production in many a year. This “Into the Woods” is musical theater perfection.

The play is a joyful, uplifting fairy tale…until it’s not. Interlocking the traditional tales of Little Red Riding Hood; Jack the Giant Killer (of Beanstalk fame); Cinderella and her Prince; Rapunzel and hers; and a Wicked Witch, and adding two original characters, a Baker and his Wife (Rapunzel’s sister), into a coherent mosaic and then deconstructing the myths is, arguably, Sondheim’s crowning achievement, an assertion bolstered by this production. 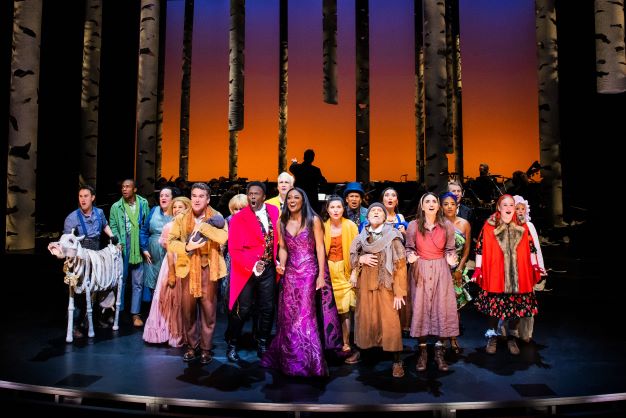 The cast of “Into the Woods”

Rarely have all theatrical elements combined in such synchrony; every technical aspect is nigh flawless: David Rockwell’s moveable feast set, Tyler Micoleau’s lighting, and Andrea Hood’s marvelous costumes. Directed by Lear deBessonet, artistic director of Encores! at NY City Center, where the production originated in May, and choreographed by Lorin Latarro, it is a grab bag of delightful surprises.

Sara Bareilles as the Baker’s Wife

The first act puts a spin on the well-known tales, linking them with the Baker couple’s need to dispel a curse that renders them childless. To lift the curse, the Baker couple must bring to the Witch (their next-door neighbor, wouldn’t you know) Little Red’s cape, Rapunzel’s hair, Cinderella’s glittery slippers and a milky white cow (cue Milky White, the cow Jack swapped for the magic beans). The quest for those items is a zany pastiche of knockabout comedy, caricatured melodrama, and more than a few memorable tunes, culminating, at the first act curtain, in a breezy ‘Happily Ever After’ tableau.

Act two takes the wind out of those sails, as the euphoria of act one is dispelled by marital strife, natural (and unnatural) disasters, even by deaths. If that sounds grim, well, it is…on the surface. But in Sondheim and Lapine’s telling, and this director and cast’s quicksilver interpretation, it remains engaging, funny even, through it all. ‘Be Careful What You Wish For’ has never been more entertainingly illustrated.

The musical numbers advance character, plot, or both. Consider the Wolf’s “Hello Little Girl;” the Baker and Wife’s lament “It Takes Two;” and songs that precede and follow the Baker’s Wife’s seduction by Cindy’s Prince (which was cut for the movie).

[There is an “Into the Woods Jr.” for school productions, with minimal dancing, no chorus and a simplified score. Still, some drama clubs do only the first act. Might as well just assign the kids to read the fairy tales.]

The cast of stage royalty embraces deBessonet’s unique style with one mind. Farcical exaggeration is the order of the day, until a simple shrug or sideward glance makes a subtle impact. While a true ensemble piece, every character – and here every actor – is a standout. Sara Bareilles is at once a feminine and feminist Baker’s Wife. She is wistful, as in “A Very Nice Prince,” sung with Cinderella (a very special Phillipa Soo) and later with “Moments in the Woods,” following her ‘moments’ with Cinderella’s Prince. Cindy’s and Rapunzel’s Princes, Gavin Creel and Joshua Henry, are as broadly comic as the roles allow, upstaging and complementing each other with the familiar “Agony.” (Creel also doubles as the lascivious Wolf.)

At my performance, understudies covered three roles: Jason Forbach was in as the Baker; Jack was played by Alex Joseph Grayson; and Delphi Borich, in her Broadway debut, was Little Red Riding Hood. I cannot imagine their counterparts, one an above-the-title star, being better in the roles. 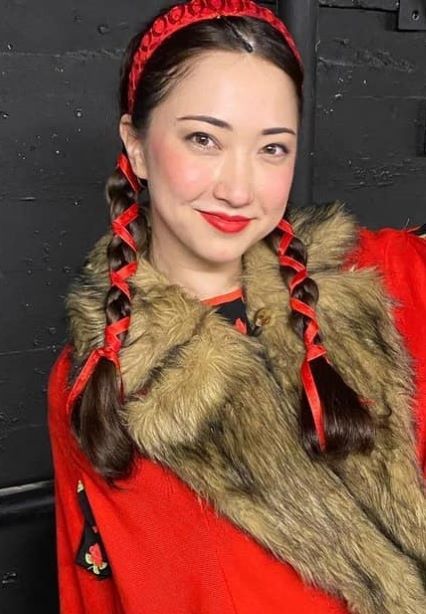 When did saving the best for last involve a Witch? Patina Miller is, in a word, magnificent. As scary as she is in flowing black Witch finery with weapon-like talon fingernails, her transformation is breathtaking. Her unabashed Diva entrance in an elegant purple pants-gown stops the show before she even sings a note. And when she does the feeling is electric. By the “Children Will Listen” finalé, a message if ever there was one, a wave of well-being fills the theater. And fittingly, the last curtain call is for conductor Rob Berman and the sixteen-piece Encores! orchestra, whose “chase music” sends you out into the street on a high. 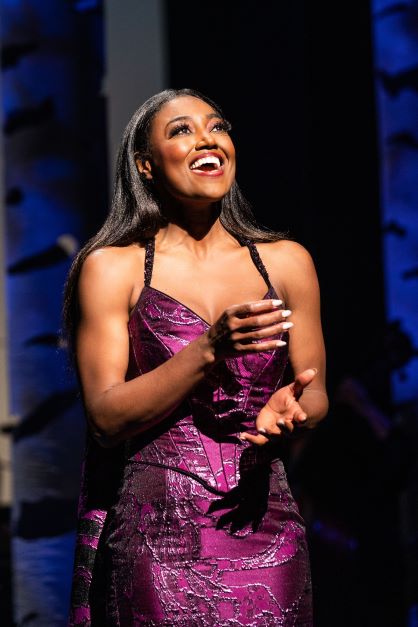 The 1986 original “Into the Woods,” ran nearly two years; a 2002 revival less than half that. This definitive revival’s limited run is scheduled to end on August 21, and while an extension is not unimaginable, it is a must-see for devotees of Broadway musicals, Theatre in general or Sondheim in particular (which covers everyone who has read this far). Do not delay.