Tennessee Williams’s “Cat on a Hot Tin Roof,” reportedly his own personal favorite, has weathered so many revivals and revisions since its 1955 Pulitzer Prize-winning premiere that allusions to a feline’s nine lives is pretty much unavoidable. So there it is.

Besides the 1974 production that restored previously excised text, and one in 1990, there were three other Broadway revivals in one recent ten-year span: 2003, 2008 and 2013. After a more respectable interlude, another revival is now on view. The Ruth Stage production, at the Theatre at St. Clement’s, is the first “Cat on a Hot Tin Roof” authorized by the Tennessee Williams estate for off-Broadway production. Would that it were more worthy. Perhaps the finest example of Southern Gothic literature written for the stage, it falls short here, partly in conception and partly in execution.

The play is set over one day and evening in the Mississippi estate of domineering cotton tycoon Big Daddy Pollitt on the occasion of his 65th birthday and (alleged) clean bill of health. It zeroes in on Big Daddy’s alcoholic son Brick and Brick’s wife Margaret (Maggie the Cat), whose intimacy-deprived marriage is haunted by repression and denial. Other family members surround them in swirls of greed, jealousy, frustration and, as the theme evolves, mendacity. Despite their intra-personal tensions, they share traditional Southern roots and sensibilities, little of which are in evidence in Joe Rosario’s detached direction. With one notable exception, for example, there is scarcely even an inflected drawl to be heard. Southern Gothic this “Cat” is not. 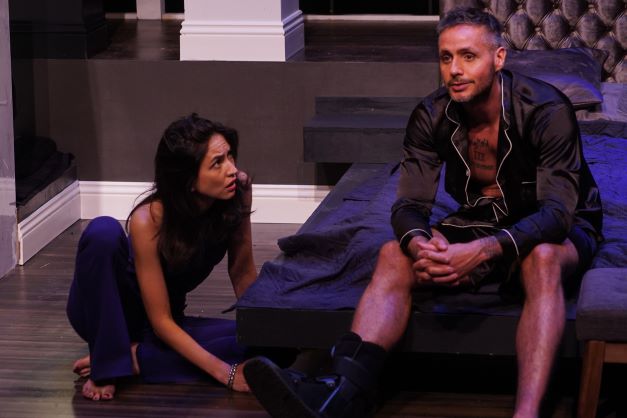 The first act is a formidable acting challenge for the play’s Maggie, who enters in a state of distress and launches into a 45-minute near-monologue. Sonoya Mizuno, a former ballet dancer making her NYC stage acting debut, makes a valiant effort but is over-matched. Inaudible at many junctures, she surfs the speeches as if by rote, skimming over them as if in a race. Ruth Stage’s creative director Matt de Rogatis is a hunky Brick, all the while taunting Maggie with studied, preening poses that counter his “I’m getting softer, Maggie.” His and Maggie’s inaudibility is exacerbated by the wide and shallow stage. Scenes at either end are played three-quarters back to the audience, and the actors’ frustratingly conversational tones barely register.

Then there is the shouting in the middle. Christian Jules Le Blanc, the lankiest Big Daddy since Victor Jory, whom I saw in a 1960s road company, is a Red Bull in a china shop. Dominating the second act with Brick, much as Maggie does the first, Le Blanc is a hyped-up, gesticulating Big Daddy, hardly the deceptively avuncular possessor of “twenty-eight thousand acres of the richest land this side of the valley Nile.” And while it is hardly a comic role (neither is Stanley Kowalski, but still…), Big Daddy does not get one laugh in this production, swallowing even the punchline of the elephant joke. 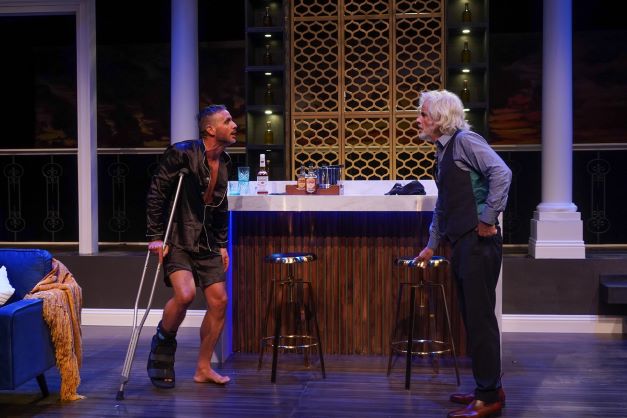 Ironically, the most authentically Southern character is the most miscast. As Big Daddy’s beleaguered wife Big Mama, Alison Fraser captures the atmosphere (and dialect) of Southern gentility even as she belies the sadly sympathetic character that Tennessee Williams wrote. Hardly the “fat old body” that when Big Daddy sees “what she looks like…I wish I didn’t,” Fraser is poised, neatly coiffed, and attractively attired in a scoop-neck paisley item. (The original Big Mama was Mildred Dunnock, the quintessential long-suffering wife. Think Linda Loman.) 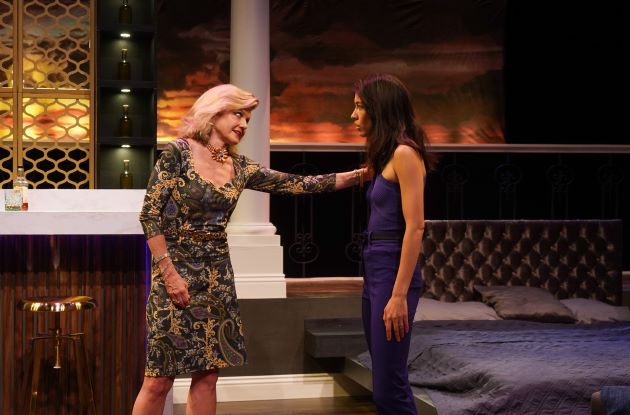 Words of wisdom from Big Mama (Alison Fraser): “When a marriage goes on the rocks, the rocks are there, right there.”

Of more than passing interest, the production includes frank allusions to the suppressed homosexuality that led to the suicide of Brick’s friend Skipper – and to Brick’s withdrawal from Maggie. Always a perceptible undercurrent, even the subtlest mentions were cut for the 1958 Paul Newman-Elizabeth Taylor movie. The restoration adds currency. So does translating the euphemistic “rut” and “rutting” into the F-word, invoked sparingly but effectively. Maybe “…Officer Krupke, krup you!” will fall by the wayside someday.