Between 1961 and Y2K, Neil Simon was represented on Broadway by thirty plays, winning four Tony Awards (one honorary) and the 1991 Pulitzer Prize for Drama (“Lost in Yonkers”). The plays were basically comedies, many with serious undertones. As a measure of his importance in those decades, the Alvin Theatre on West 52nd Street was re-named the Neil Simon Theatre during its 1983 run of his autobiographical “Brighton Beach Memoirs.”

Simon’s plays were/are nearly all firmly tied to the time and tone of then-prevailing social mores. While a goodly number of the laugh lines still work, much of the dialogue and many of the situations are dated; some among them make light of personal interactions that we now regard with a degree of dismay. Time has not been kind to the Simon tone.

Simon’s plays are still seen on high school and community stages, but professional productions, even short of Broadway, are rare. Which makes the current Broadway revival of his 1968 “Plaza Suite” an anomaly.

“Plaza Suite” is a triptych: three separate one-acts featuring three different couples, all set in Plaza Hotel suite 719. The situations and the dialogue are dated, although many of the jokey exchanges and laugh lines stand up. Simon was not a champion of women, especially in the early plays, and these three are hardly today’s role models. One here is unkindly dismissed by her husband, and one is victimized. That the play survives the aging process at all – and it does – is due to minor editing, judicious staging adjustments, and gem performances from Sarah Jessica Parker, ably abetted by her real-life husband-cum straight man Matthew Broderick. Ms. Parker plays the women with a knowing comic sense that will never go out of style. 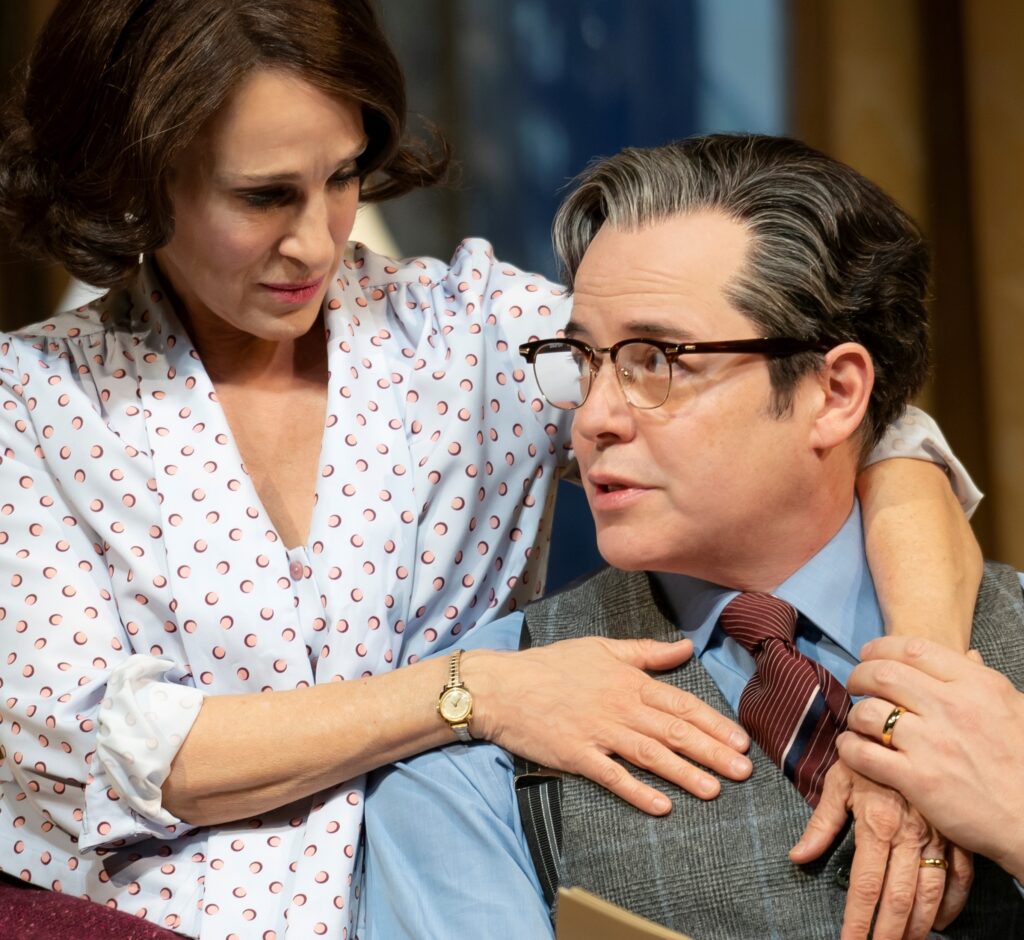 “…when a man becomes blankety-one or blankety-two, he is feeling insecure, that he’s losing his virility.” [Photos: Joan Marcus]

The first vignette is a dour exercise. Sam and Karen Nash are celebrating what Karen thinks is their 24th wedding anniversary (it’s the 23rd and the next day) in their same honeymoon suite (was actually one floor above). That is, Karen is celebrating…or trying to. Sam is deep into paperwork for an impending business deal and, this being a 1960s comedy of (bad) manners, is also having an affair with his secretary. (“You could have at least taken the trouble to look outside your office for a girl,” Karen chides.) After too few laughs and too-mild recrimination, the upshot is that she is forlorn, he is a boor, and the relationship is unresolved. A disappointing opening shot.

The third segment (skipping the second for now) is a funny setup that, even at forty minutes, is stretched thin. As sixty-eight wedding guests wait downstairs, the bride has locked herself in the suite 719 bathroom and refuses to come out. Parents Norma and Roy plead, threaten, and cajole through the locked door, amusingly announcing themselves each time. 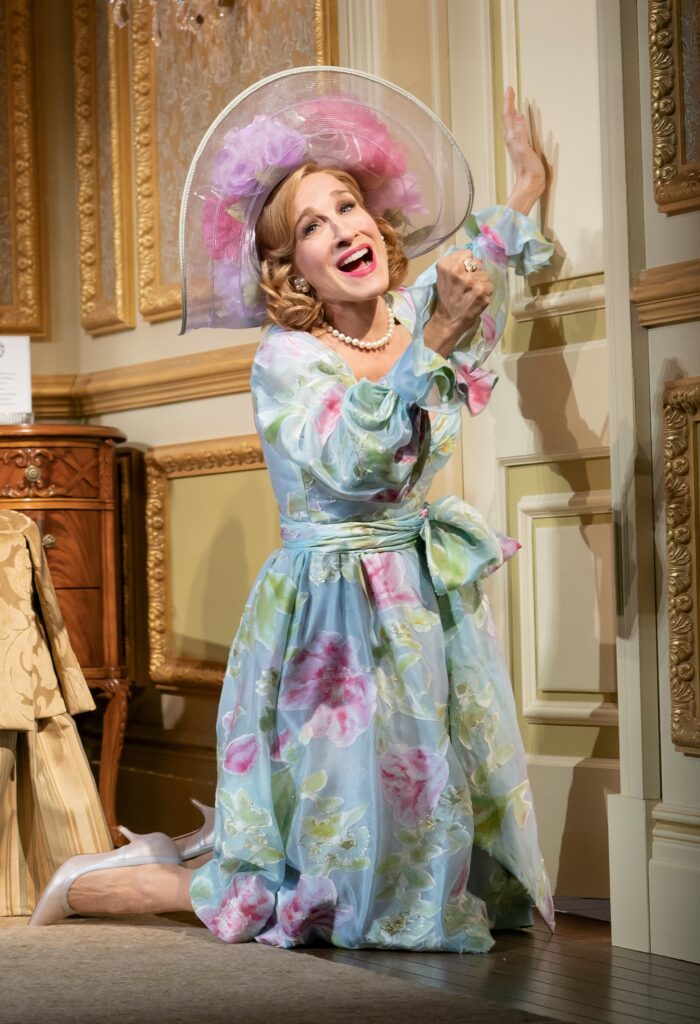 “Mimsey, this is your mother speaking.”

One sign of this piece’s datedness is the absence of plural pronouns. “It’s costing me eight hundred dollars…,” laments Roy. “I hired a photographer…”   And the sixty-eight people “are drinking my liquor…” The resolution, involving a throwback ploy by the groom, is hardly liberating, although Molly Ranson is a fetching bride. (She is also the opening play’s office dalliance.)

Having recently read the script, I expected to cringe through the middle segment, but partway into it, I heard laughter from an unexpected source. “My goodness,” I thought, “Is that me?” And indeed it was.

In the sketch, “Mr. Famous Hollywood Producer” Jesse Kiplinger, in New York to sign Lee Marvin for his latest epic, has invited his New Jersey high school sweetheart Muriel Tate to join him for a nostalgic reunion. Jesse’s seductive intention is clear from the outset, and Muriel is to be no match for his wiles. Although now a married mother of three (“A boy and a girl…”), she is still basically a naïf, and as written, the scene unfolds like a chapter from the Harvey Weinstein playbook.

Plying her with drink, flattery, and a barrage of Hollywood name-checks, Jesse will have his way, even if it requires coercion. In fact, according to one stage direction, presumably written by Simon, Jesse “…forces her back down on the bed…pulling the dress off her shoulders.” (An earlier instruction is lewdly explicit.)

But lo and behold, what hath director John Benjamin Hickey wrought? By re-arranging the physical staging and giving Ms. Parker free rein to modernize Muriel without jading her, we now have a really funny conspiracy to commit mutual seduction. It is still a battle of the sexes, but one that is evenly matched. 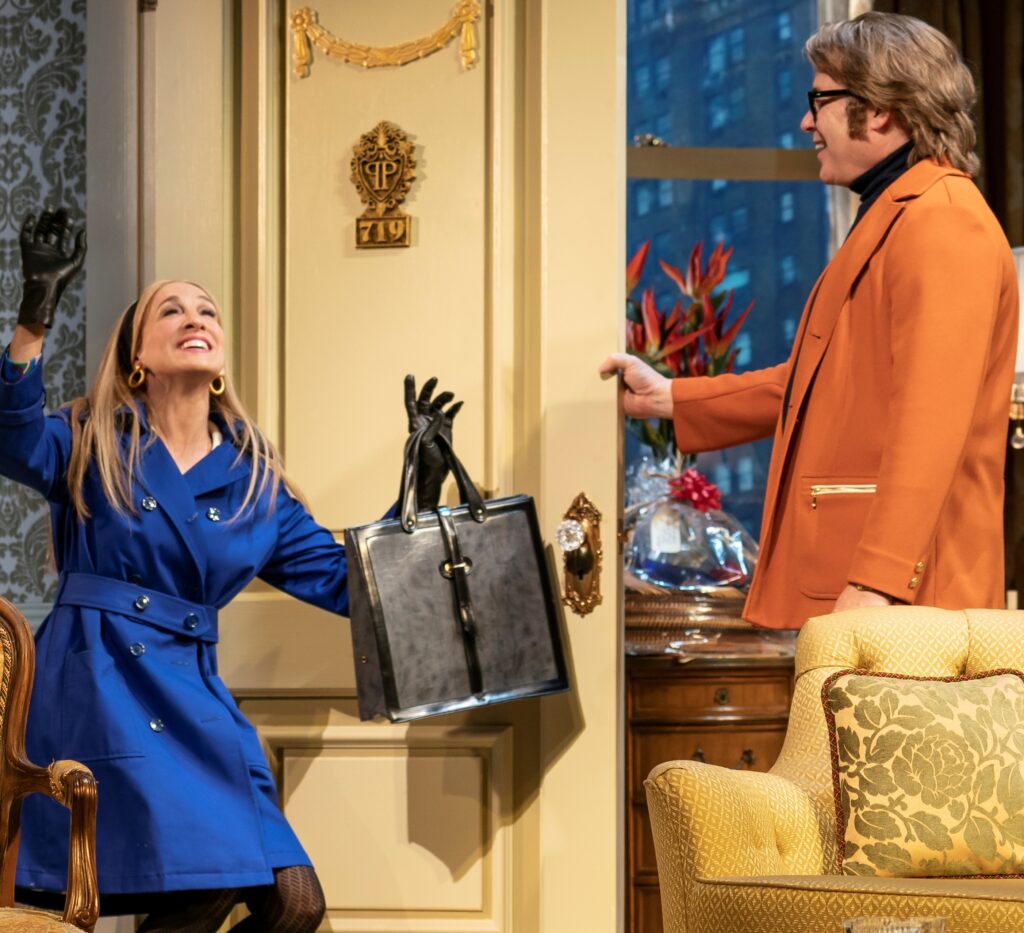 “I just dropped in to say hello. I really can’t stay.”

Muriel declares that she “must have been out of my mind, coming to the Plaza Hotel in the middle of the week,” and maybe she was in 1968. This time around, in Sarah Jessica Parker’s pinpoint perfect gem of a performance, Muriel knows darn well why she’s there, and the winking fadeout left me wishing Jesse and Muriel a memorable weekday afternoon in Plaza Suite 719.