Think about the last ten new plays you saw. Were most of them really well written, with cohesive plots and well-developed characters? Were they thought-provoking and/or amusing? Well, that assessment sums up my last ten, which I saw – all ten – last Sunday at Barrington Stage Company’s “10X10 New Play Festival.” Now in its eleventh year, the Festival comprises ten ten-minute plays, thus the moniker 10X10.

I wondered: How can ten plays begin/middle/end coherently in just ten minutes each? Wouldn’t even the best of them be little more than an extended skit? But no; while most of the ten are comedic in style and intent, these are all complete and stage-worthy pieces. Selected from many submissions, the plays range from the (surprisingly) sublime to the (intentionally) ridiculous.  It is a theatergoer’s buffet, and a sumptuous one at that.

Two directors each helm five entries, while six actors play several characters apiece. With bare minutes between the plays for costume changes and minimal tech setup, versatility is hardly a luxury, and these folks deliver.

Barrington Stage Company founder (1995) and long-time artistic director Julianne Boyd is retiring at the close of the 2022 season. Her final directing credit will be for “A Little Night Music” in August, but if it were for the 10X10 Festival entry “Gown,” she would be going out on a high. 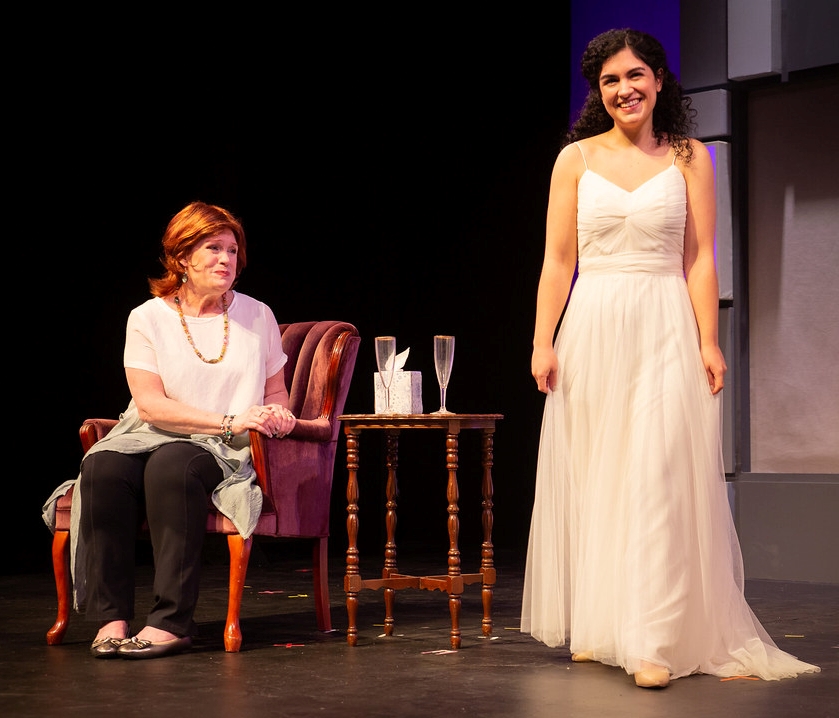 Robert Weibezahl’s “Gown” packs plenty of plot and poignancy into its ten minutes. A young woman (Aziza Gharib) models bridal-shop dresses for her mother (Peggy Pharr Wilson), while a rookie saleswoman (Kelsey Rainwater) hovers, anticipating a sale. When the “customers” reveal why they are there despite having no wedding plan, the saleswoman, in the closing line of dialogue, wins the hearts of everyone in hearing distance. (No spoiler here; you may want to stream the ten. Details below.)

At the other extreme, the goofy one, John Bavoso’s “An Awkward Conversation in the Shadow of Mount Moriah” recounts the hitherto redacted Biblical exchange following the aborted sacrifice by Abraham (Robert Zuckerman) of his son Isaac (Doug Harris). I mean, how would you feel if, but for the last-minute intervention of an Angel of The Lord, your old man had been prepared to off you on a hilltop altar? Directed by BSC veteran Matthew Penn, it is funny stuff indeed. (In 2018, Penn directed Glenn Close as Joan of Arc’s mom in “Mother of the Maid” at The Public Theater, a splendid production.) 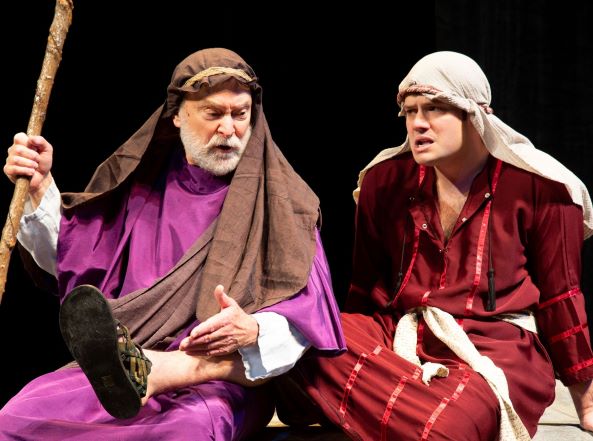 Among the other 10X10 Festival entries, all of which thoroughly entertain, Mark Harvey Levine’s “Misfortune” and Chelsea Marcantel’s “Climax” stand out. In the former, directed by Boyd, an after-dinner couple (Doug Harris and Aziza Gharib) read their fortune cookie tabs. “Work hard and your hard work will work for you,” reads hers. His: “The person you just had dinner with will kill you tonight.” The message? Be careful with whom you dine.

In the Penn-directed “Climax,” long-time best friends Samantha (Kelsey Rainwater) and Teddy (Matt Neely), waiting outside a restaurant for their cars, confess their love for one another. She being married and him dating a woman who, she suggests, is “a little young for you,” are barriers to overcome if their relationship is to proceed to the next level. Whether or not it will takes up most of the ten minutes, culminating in a satisfactory conclusion. 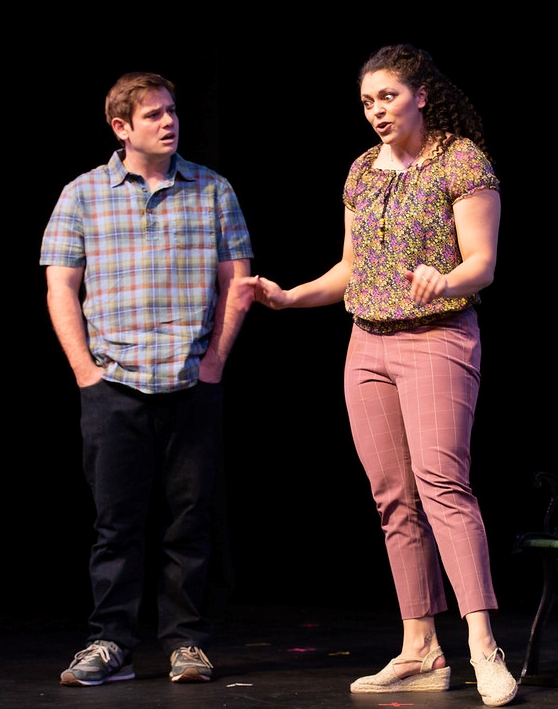 “Honestly,” by Stephen Korbar and directed by Penn, is also notable for its ending. After dating for three months, a couple (Doug Harris and Kelsey Rainwater) are breaking up at her behest. (Despite, she acknowledges, great sex.) The breakup frees them both to share lies told and secrets kept during their relationship. A ten-minute rom-com, the ending is foretold – or not, depending on how you view the situation.

“Stealing a Kiss” by  Laurie Allen, about an older couple’s karma, and the meta-theatrical “Love Me, Love My Work” by Glenn Alterman are worthy entries, as are Cynthia Faith Arsenault’s “Escape from Faux Pas,” about an intriguing Amazon package; Ellen Abrams’s meeting of “Liars Anonymous”; and Cary Pepper’s cynically political “The Voice of the People.” 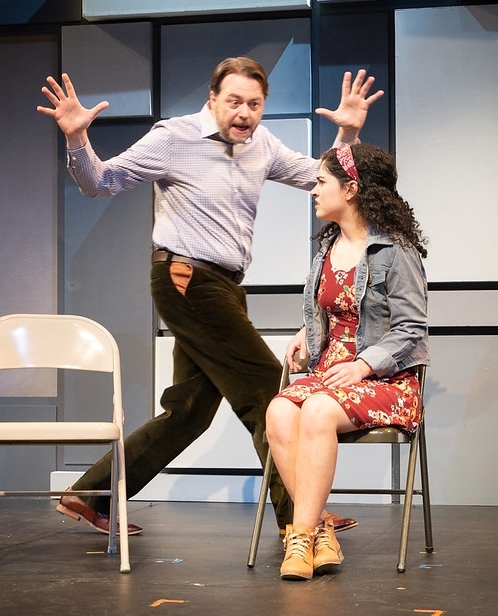 All told, there is not a humdrum minute among the fast-paced ten spot. BSC’s “10X10 New Play Festival” is an inspired concept. These selections are, individually and collectively, top-notch Theatre, directed with flair and acted by an outstanding professional ensemble. (Rehearsing disparate roles in the same weeks and playing them back-to-back in rapid-fire repertory? Whew.)

I missed the first hundred, but these ten plays have made me a fan. Already looking forward to #111-120 next year.

The Shubert Organization is renaming their Cort Theater on West 47th Street in honor of actor James Earl Jones.  In the 1960s, he and I were in (different) Broadway plays during the same months. We both hung out at Downey’s on 8th Avenue, the theater-crowd Joe Allen of its day, no longer there. Jimmy, as he was known, and I were friendly acquaintances. At the 2008 Outer Critics Circle Awards, where he had won Featured Actor for Big Daddy in “Cat on a Hot Tin Roof,” I re-introduced myself and during some mutual memory-sharing, asked if I could still call him Jimmy. “Of course,” he boomed. “I was Jimmy to you then and always will be.” Four years later, in May 2012, he won the same Award for playing the President in “The Best Man.” “Congratulations, Jimmy,” I said as I greeted him at the bar, where we chatted again about the old days. As I walked toward my table, a fellow critic who had also been at the bar got in my face. “You have some nerve,” he said, “calling James Earl Jones ‘Jimmy’.” “We’re old friends,” I said. “We were on Broadway together.”