It is no knock on A. R. Gurney’s much-admired “Love Letters” to note that “Ken Ludwig’s Dear Jack, Dear Louise” takes Gurney’s premise and runs with it…literally. Gurney has a man and a woman seated at desks reading aloud the letters they wrote to each other over a fifty-five-year span. They remain seated throughout and do not interact or handle any props. (Gurney’s instructions are specific.)

“Jack…Louise” also consists of a couple reading letters they wrote to each other as well as some received (and other missives), and while Ludwig at first considered a seated-at-desk format, he opted instead for full staging, with physical movement, even though the two characters do not so much as look at each other [spoiler alert] until the very end. (Same with the Gurney.) Under David Saint’s appropriately free-form direction and performed with charm and nuance by Bill Army and Amelia Pedlow at George Street Playhouse, Jack and Louise emerge as warm, humorous and passionate individuals. Even though they remain separated (it bears repeating), they exude charisma – between each other and into the audience.

Not to belabor the comparison, but where Gurney’s characters and letters are pure fiction, Jack and Louise are based on Ludwig’s actual parents, whose letters, re-created here (originals were not kept), are the stuff of Ludwig family lore. Introduced at a distance by their fathers, their correspondence spans the WWII period from June 1, 1942, to VE Day, May 8, 1945. Louise, a Brooklyn native in her mid-twenties, is an aspiring dancer in NYC; Jack, an Army Captain from Coatesville, PA, was drafted right out of medical school, a tidbit he mentions only in passing. (“You’re a doctor? Don’t you know every girl in the world wants to go out with a doctor?”)

Their correspondence evolves from tentative revelations and mild flirtation to “full disclosure” (some of it awkward) and acknowledged affection. (Louise is first to sign off with “Love.” Ahhh…)

In designer James Youmans’s finely detailed separate areas, Jack’s barracks room and Louise’s bedroom, the two go about their mini-chores – folding clothes and such – while the other reads and reacts to the letters without, as Ludwig cautions, “pulling focus.” It is naturalistic acting at its non-pretentious best.

Over two hours (including intermission), Louise meets Jack’s family, including eleven judgmental aunts, falls out a window, is passed over at an audition, does a scene from “Arsenic and Old Lace” (her Cary Grant needs work), hits the road with “Hellzapoppin,” and volunteers at the Stage Door Canteen. Jack performs surgery (offstage), declaims some Winston Churchill, is shipped overseas, takes a bath in his helmet liner (also offstage…whew), goes MIA, and loses Louise’s phone number. (Don’t worry; it works out.) 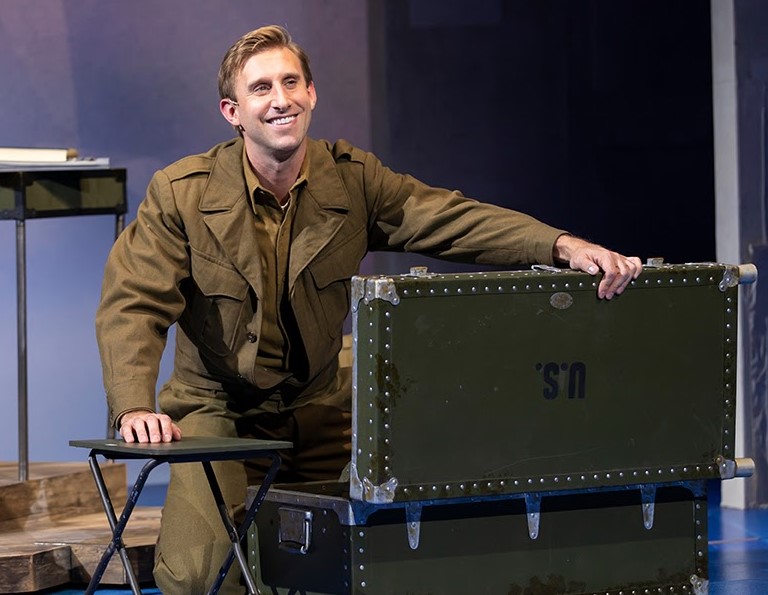 Bill Army and Amelia Pedlow do not miss a beat. If there has been a better evocation of the 1940s in recent years, I missed it. Army’s army persona is spot-on. In regulation fatigues or military dress-up throughout, it all happens with his on-and-off military posture, his expressive face, and his resonant voice. (He proves hunky, too, in a shirtless flashing.) 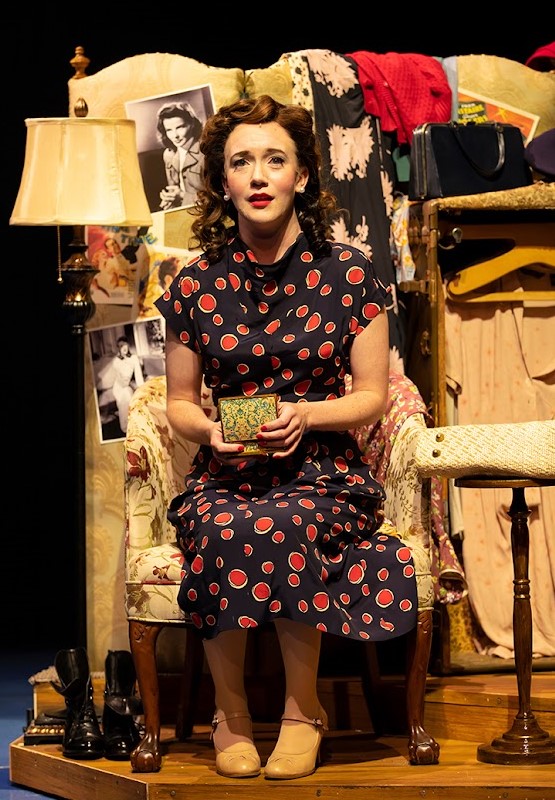 The play is a departure for Ludwig, best-know for the nonpareil farce “Lend Me a Tenor.” A heartfelt, humor-infused tribute to his parents, “Dear Jack, Dear Louise” is a uniquely relatable romance. It is the perfect date-play, in the most positive intent of that phrase.

Among its admirable aspects is the under-the-radar ‘historical’ context. Jack’s warzone setting and Louise’s 1940s show-biz milieu are so well evoked in words and communicated in the acting that one feels, at more than a few moments, steeped in the period. Examples abound: “…I’m accomplishing something specific and useful,” Jack writes. “Some [patients] are so wounded, they can’t communicate at first. Some of them just don’t get better.”  And this from Louise: “Last week I saw ‘Oklahoma’ and it was so wonderful I nearly fainted.” And who knew that a dancer celebrating her first role in a Broadway road company in 1944 would run in circles shouting OH MY GOD over and over? (Some of Louise’s best lines are dated to perfection. One such gem is a toss-off about not liking the way Rosalind Russell dresses.)

Whether or not all the exchanges were Ken Ludwig’s parents’ exact words, he honors them by telling us they were. “Dear Jack, Dear Louise” is a splendid play.