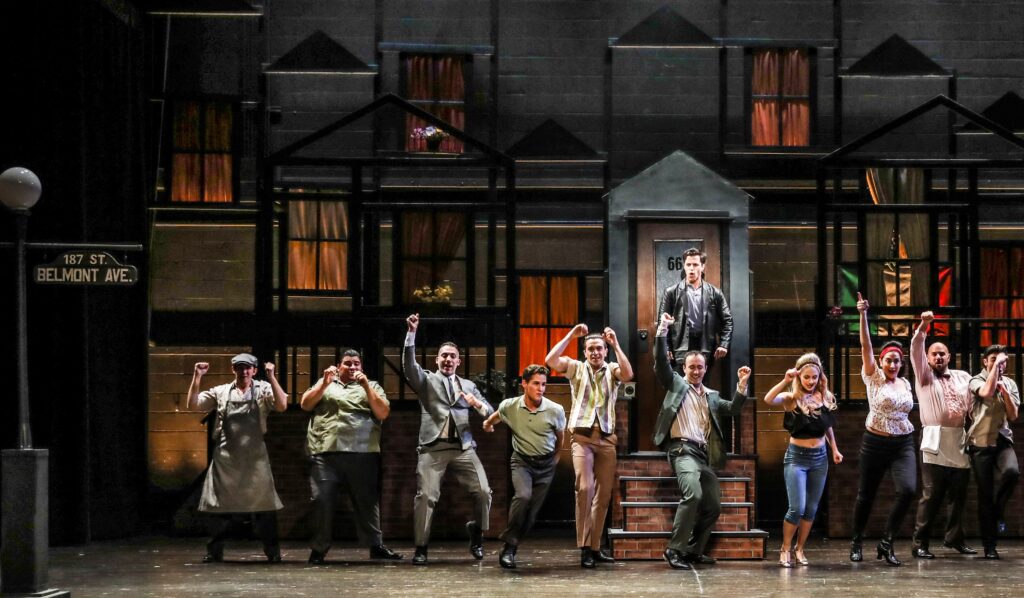 The Axelrod Performing Arts Center in Deal Park, New Jersey has emerged from Covid lockdown with a stylish and engaging production of “A Bronx Tale,” the full-scale musical version of Chazz Palminteri’s 1989 autobiographical solo show. The 1993 (non-musical) film version starred the writer as neighborhood gangster Sonny, who took young Chazz under his wing, and Robert De Niro, who also directed, as Chazz’s working-class father. Palminteri revived his solo version on Broadway in 2007, and the musical, long in development, premiered at Paper Mill Playhouse in New Jersey in 2016, before an extended Broadway run.

That was “A Bronx Tale” then. Axelrod’s, directed by Richard H. Blake, who originated the father on Broadway, is now. Palminteri’s streetwise dialogue is still way cool; the rangy show-music by Alan Menken (“Beauty and the Beast”) is catchy; and Glenn (“The Little Mermaid”) Slater’s lyrics serve the story well. Blake brings affection and insight from the Broadway run, and bolstered by professionals in a few roles, the large, variously experienced cast executes his direction and Abbey M. O’Brien’s spirited choreography with confidence. The show’s overall smoothness belies its “local” origin. It is first-rate entertainment. 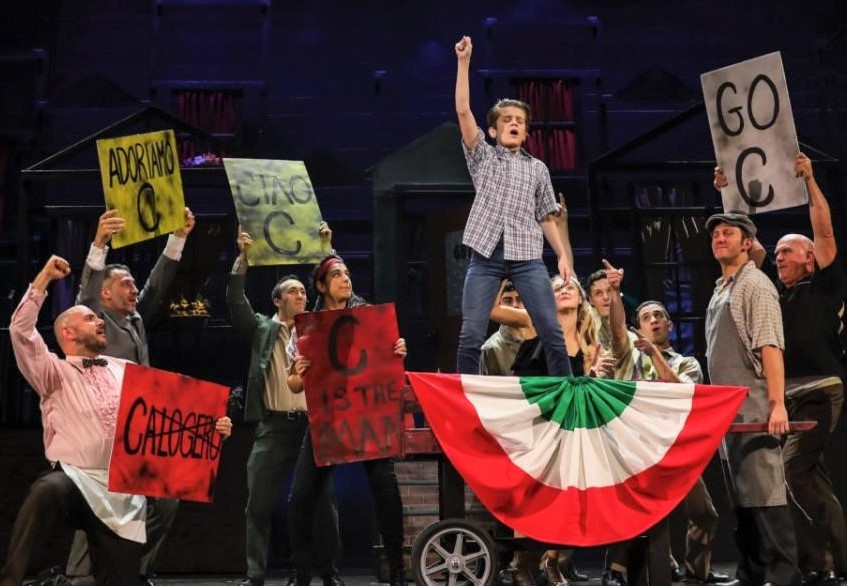 The first twenty minutes are built around younger Calogero. Hudson Koonce makes the most of them.

The tale begins with nine-year-old Calogero witnessing a gang killing from the front stoop of his Belmont Avenue tenement. When he does not finger perpetrator Sonny in a lineup, a bond forms between the wiseguy and “C,” as Sonny dubs Calogero. C’s bus-driver father disapproves of the relationship, creating a conflict that fuels the principal plot.

A parallel story line involves late-teen C’s budding romance with Jane, an African American girl from his high school. That relationship and its ramifications account for some soul rhythms amidst the doo-wop. It also inspires the show’s best song: “One of the Great Ones,” Sonny’s eleven-o’clock number.

The upbeat “Belmont Avenue” opening is narrated by the late-teen Calogero, played by Mike Ferlita, who assumes the leading role when young C (Hudson Koonce) ages up. Koonce is a tough act to follow, but Ferlita deftly plays C’s multiple loyalties and headstrong defiance. His scenes (and songs) with Jane (super-charming Nashka Desrosiers) are textbook studies in mutual attraction. (Explaining his visit to the off-limits-to-whites record store where she works is a gem.) 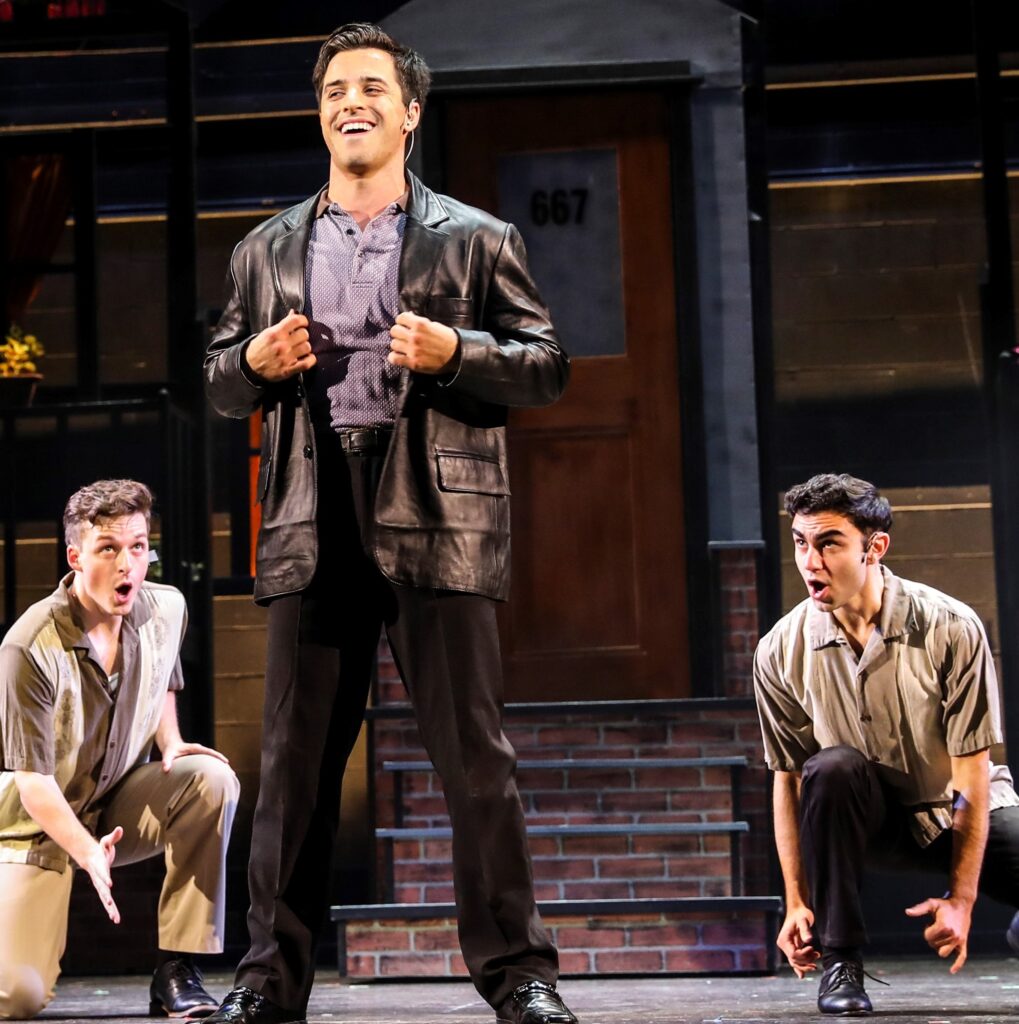 Mike Backes and Emily Esposito imbue C’s parents with emotional depth, and Mike Keller’s Sonny comes off as the prototypical anti-hero he must have been to Chazz in real life. 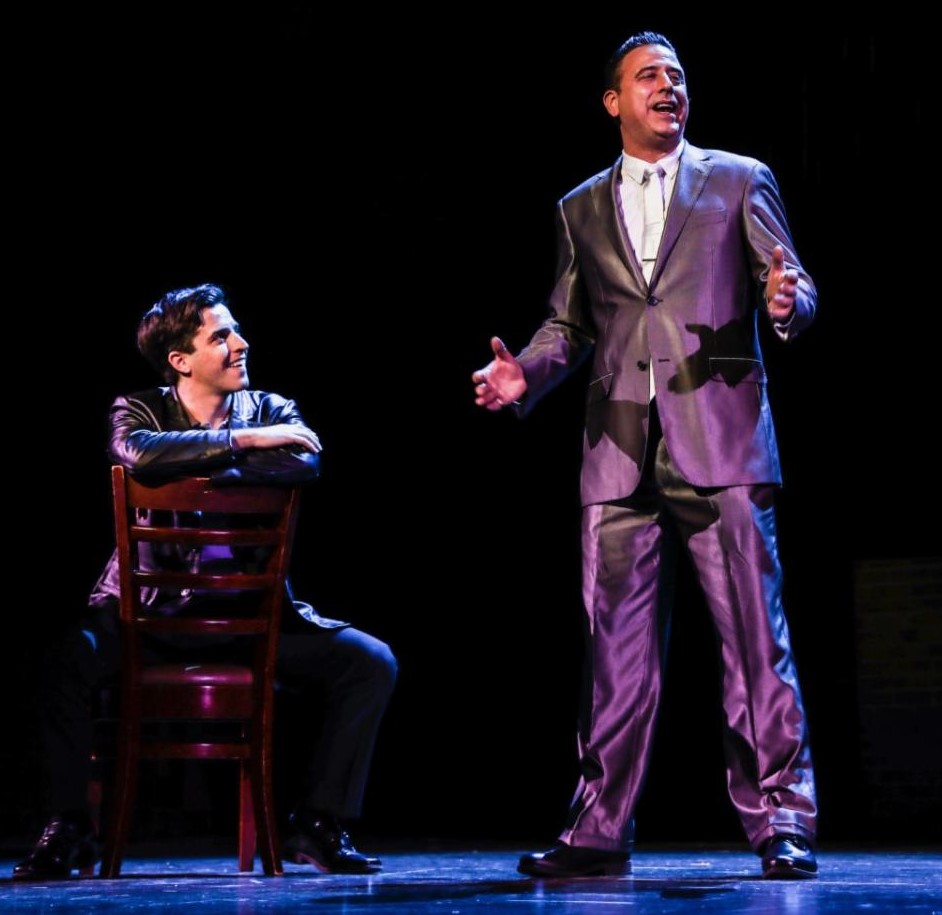 Set designer Fred Sorrentino’s tenement facades have a 3-D look to them, and Cameron Filepas’s lighting isolates areas and characters efficiently. Some of the vocals tend to hollow out, which says more about the acoustics than about Gerry Gironda’s sound design. (In a sign of the times, the program lists a Covid compliance officer and an assistant Covid compliance officer. Let’s hope Lara Hayhurst and Trey Compton are out of work soon.)

It isn’t ALL men. Jenna Filippelli is proof of that.

While I thought it strange that the Belmont Avenue youths were nearly all male (same on Broadway), the guys do not lack for energy or talent. The doo-wop quartet is especially on target. Stranger still is the omission at the end of “One of the Great Ones” of a brief, poignant tableau that reveals a ton about Sonny and another character – curiously missing, despite director Blakes’s intimate connection to the piece.

The overarching theme of “A Bronx Tale” is its tug of war between really-really good and not-so-good. It concludes as it must, with neither extreme triumphant. Chazz Palminteri seems to have survived Belmont Avenue and Sonny pretty well. You can see and hear how it all worked out this weekend at the Axelrod PAC. My bet is you will be glad you did. 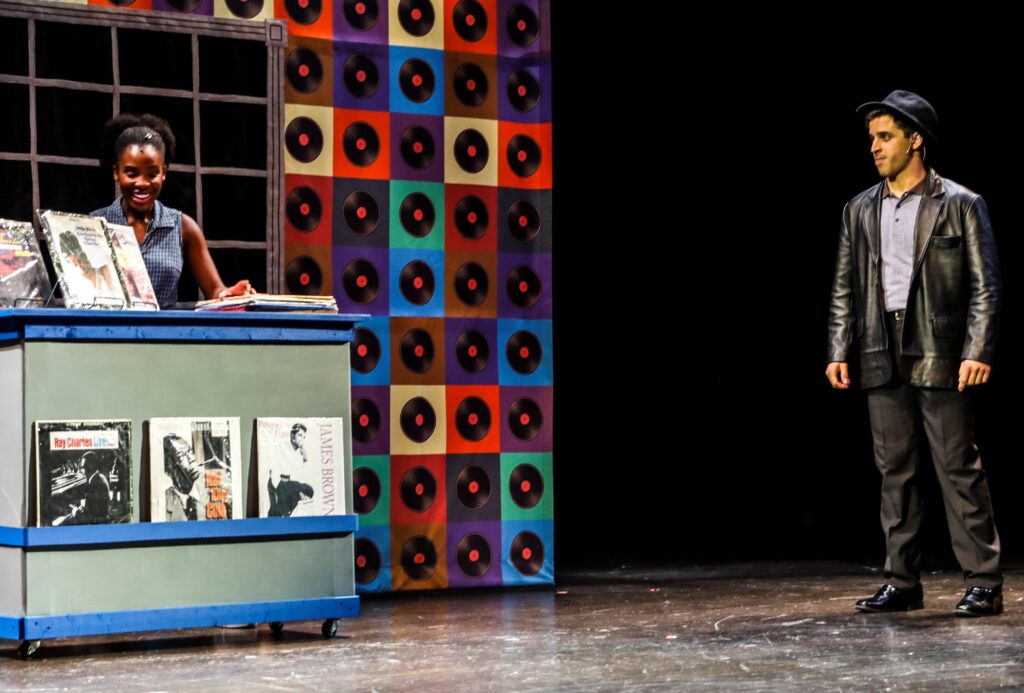 “I was in the neighborhood.”

[It is impossible to write about “A Bronx Tale” without mentioning Nick Cordero, who originated the role of Sonny. His death in 2020 from Covid-19 complications after a harrowing three-month hospitalization intensified national attention to the ravages of the disease. In a program note, director Blake dedicates this production to Cordero, “One of the Great Ones.” Nick was forty-one.]