The 1955 Broadway musical “Damn Yankees” was based on Douglass Wallop’s novel “The Year the Yankees Lost the Pennant” (to the lowly Washington Senators). A Broadway revival of “Damn Yankees” opened on March 3, 1994 at the (Marriott) Marquis Theatre. On August 12 of that year, Major League Baseball came to an abrupt halt when the Players went on strike against the Owners, cancelling remaining games and even the World Series.

The “Damn Yankees” revival closed on December 31, ’94, only to re-open on February 28, 1995, with Jerry Lewis replacing Tony Award nominee Victor Garber as the devil-character Applegate. The re-revival ran another six months. The baseball strike was settled  April 2, the day before “replacement players” (minor league scabs) were to take the field. 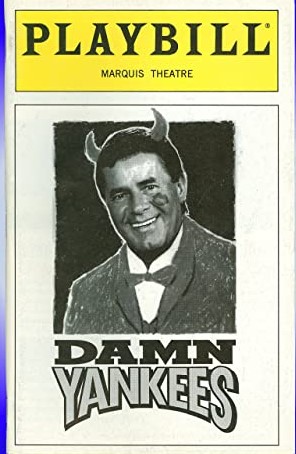 My column below is also a revival, having appeared in the Newark Star-Ledger Sports pages on May 4, 1995. Here it is, lightly edited, 26 years later:

In its new life, “Damn Yankees” still features Lola (whatever she wants, she gets) vamping bedeviled young Joe Hardy. Old Joe had sold his soul to the devil in exchange for becoming the greatest baseball player of all time and spurring his beloved Washington Senators to the American League pennant. With Jerry Lewis now playing the devil, Applegate, a few changes in the revival are inconsequential. Except for one: The ending.

Did our memory of baseball strategy and rules dim during the recent strike? Even Little Leaguers know the basics: pitcher must toe the rubber, outfielder hits the cutoff man, go first-to-third on a ball in the gap. But strategy and rules have both struck out in the new “Damn Yankees.”

Here’s the situation at the end of the 1955 original: Top of the ninth in the pennant-deciding game at Washington’s Griffith Stadium with the Senators ahead by a run. (Mel Allen recorded the play-by-play.) Two outs, Yankees runners on first and second. Our hero, Joe Hardy, is the Senators center fielder. The batter hits a high drive to deep center, and as young Joe races toward the ball, Applegate zaps him back into paunchy middle-aged Joe.  No way old Joe can catch up with that soaring fly ball. But…as every aging baseball fan dreams, now-old Joe makes a miraculous running catch. Ump yells “Out!” Game over. Senators win the pennant. And old Joe runs off through an outfield gate, never to be exposed as Applegate’s creation. A fantasy for sure, but it comports with Baseball rules.

Still pennant-deciding game at Griffith Stadium. Bottom of the ninth this time with the Yankees ahead by a run. One out with a Senators runner on first base, a Washington batter up, and home-run ace Joe Hardy on deck. The batter hits a long fly to center – Mickey Mantle’s center, as Mel Allen tells us in his up-dated recording. [Allen died in ’96.] Mantle makes the catch and – get this – the Senators runner on first tags up and just beats Mantle’s throw to second. First “Damn Yankees” dumb move…

The fly was the second out and the guy tagged and ran…from first to second. On Mantle’s arm. Really? If he’s out the game is over, and you wouldn’t want to be that player in the clubhouse. Even safe, he’s left first base open for the pitcher to put Joe on. (Yes, it would be the potential winning run, but the “greatest home-run hitter in the game” is not gonna see a sweet pitch.)

Anyway, Joe Hardy steps in. Hexed by Applegate from the stands, he swings and misses two pitches. The devil appears to seal the deal by zapping young Joe back into old Joe as the pitcher unfurls the third pitch. No way sluggish old Joe can slug one out.

But wait! Old Joe sucks it up and belts a dinger! The baserunner will tie the score and Joe’s walkoff will win the game and the pennant. The Washington home crowd goes wild.

But wait again! Joe, now his older, paunchy self, can’t be seen by one and all as a fraud. So, as the ball clears the fence, he drops the bat, runs directly into the dugout, up the ramp and home to the arms of his long-suffering wife.

Well guess what, “Damn Yankees” up-daters: Joe’s run does not count unless and until he rounds the bases and touches home plate. No Washington Senators pennant. Not in 1995.

On October 14, 1976, Chris Chambliss was mobbed between third and home by exuberant Yankees fans after he homered to beat the Royals for the pennant. He escaped from the base path into the dugout before reaching home plate. After the crowd had disbursed, Chambliss, alerted by teammate Graig Nettles, came out from the clubhouse and, watched by the umpire (who had waited to certify the run), stepped on home plate – or, rather, where home plate had been before some fan absconded with it.

Perhaps the actor playing old Joe Hardy comes out after every performance and, watched by a stagehand, runs the bases in the glow of the ghost light and steps on home plate.  Game over. “Damn Yankees” over. Senators win the pennant. You gotta’ have heart.

The 1976 story has been affirmed by Chambliss himself many times. The incident led to enactment of Baseball’s “Chambliss Rule,” which allows a run to be counted if the runner is impeded by unruly fans. 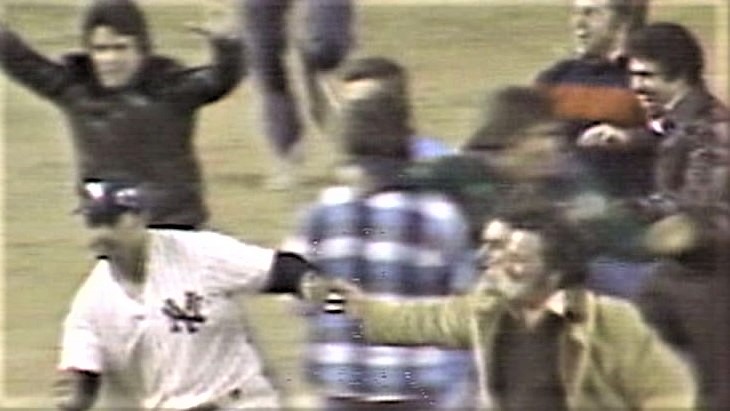