Short Attention Span? Barrington Stage Has Your Back

Anyone interested in learning how to turn a negative into a positive might want to contact the folks at Barrington Stage Company in Pittsfield, Massachusetts. For the past nine years, BSC’s “10X10 New Play Festival” has been part of Pittsfield’s winter arts festival, featuring ten new ten-minute plays performed live in their theater, which of course is off-limits now for in-person attendance.

What to do? How to continue the string and make up for the lost revenue? In a creative twist on a longstanding theatrical tradition, BSC has taken its tenth “10X10 Festival” on the road – accessible March 18-21 to anyone with an internet connection and thirty-five bucks. Believe it, you will not find a better thirty-five-cents-per-minute entertainment value anywhere. (Do the math.)

The ten plays – and they are plays, not skits or sketches – were filmed live on stage, under “strict Equity protocol” (Maggie LaMee is billed as Covid-19 Compliance Officer) and edited into a smooth 100 minutes. The plays are not performed live as you watch, but neither are they Zoom-remote. With an infrequent hesitant line or speak-over, and filmed in long takes by director of photography Daniel Jaffe, you know you are watching live actors at work.

And fine actors they are: all six of them, previous “10X10” veterans, enacting twenty-nine roles total. Directed (five plays each) by BSC artistic director Julianne Boyd and Public Theatre veteran Matthew Penn, the roles encompass a wide range of age, class, emotional state and likability (or not), all of which the actors latch onto right away and promptly disappear into. In some cases they appear back-to-back, as with Keri Safran playing a beleaguered adult daughter of an intransigent infirm mother in Marj O’Neill-Butler’s “Finding Help” and, right after, the manipulative title character (and self-described “helpless orphan”) in Ellen Abrams’s “Lizzie Borden Gets Engaged.” 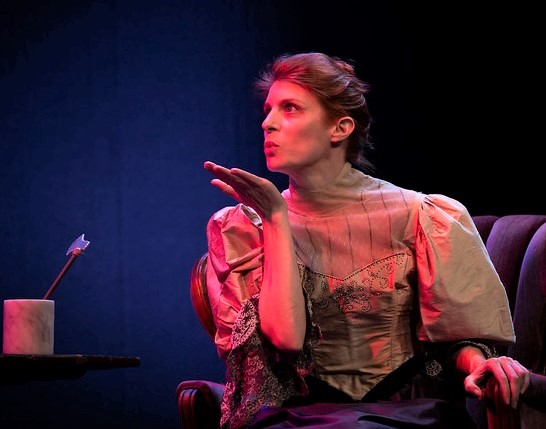 Peggy Pharr Wilson, who plays that obstinate mother, is soon seen contemplating life-and-death options on a building ledge in Scott Mullen’s “People Will Talk,” and then arranging a thoughtful gift for her husband’s 70th birthday in Walter Thinnes’s “Happy Birthday, Leonard,” a play in which the simple telling of one’s name to someone else speaks volumes. 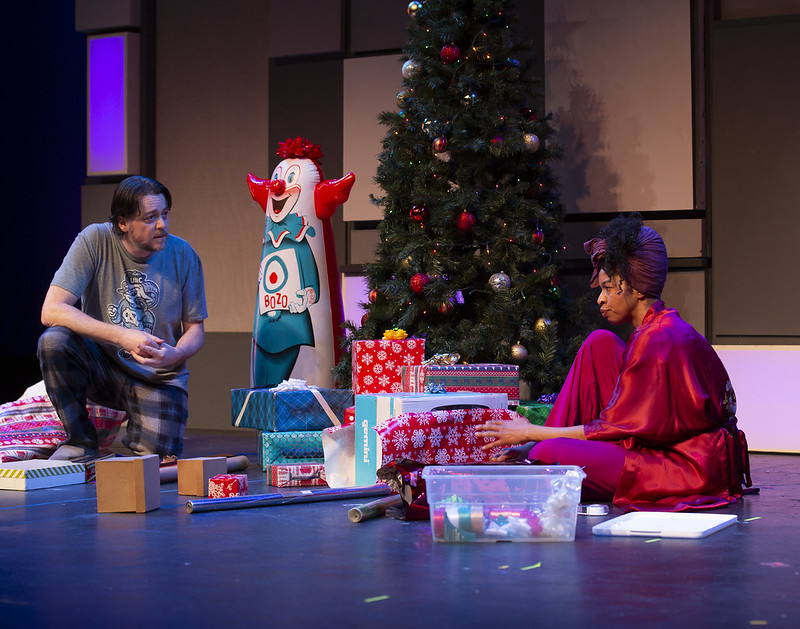 Matt Neely and Maya Loren Jackson in “Protecting the Innocent”

Maya Loren Jackson and Matt Neely are a couple with conflicting parenting skills in “Protecting the Innocent” by Brent Askari. Jackson shows up later with Doug Harris as a pair of lonely singles meeting on a park bench in Alex Dremann’s “Speed Play,” while Neely and Harris pair up together as old college acquaintances, one of whom is now Messenger of Death, in “A Dateless Bargain with Engrossing Death” by John Minigan. 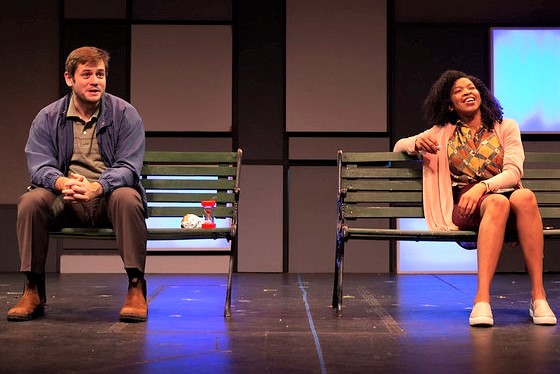 Strangers on a bench: Doug Harris and Maya Loren Jackson in “Speed Play”

Robert Zukerman handles the character-man roles, one as an off-target Eros in Jonathan Cook’s “Don’t Call Me Cupid,” and another as Max, one of four schoolteachers trapped in a field-trip cave in “Blind Larks” by Christine Foster. That one includes a delicious exchange: After Max is able to announce the time in the semi-darkness, a younger co-trapped teacher exclaims “You have your phone! Do you have a signal?”  “It’s called a watch,” Zukerman deadpans.

Bons mots flourish throughout. “Clapping [as in applause] can be sarcastic in nature.” “End stage disease? It’s cancer; you can say it and not catch it.”  “All Jennifers are adorable. What’s up with that?” “Do you think we’re stupid, Cupid?” (Okay, that one’s a groaner, but still…)

Besides Boyd and Penn’s astutely blended stage-to-screen direction, the tech contributions all hit their marks: Scott Pinkney’s lighting is also stage and screen worthy, and Azalea Fairley’s costumes are spot-on. Joseph P. Martin’s sets, based on prior Festival designs, establish time and place without overwhelming the brief running times. 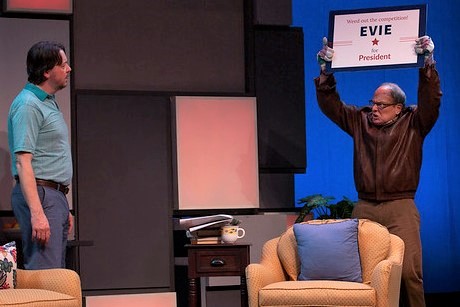 Matt Neely, left, and Robert Zukerman in “On the Rocks”

In Jessica Provenz’s, “On the Rocks,” which anchors the ten-spot, Grandpa Chester is managing Grandma Evie’s campaign for president of their Boca senior-living facility while Evie is recovering from a stroke. She is running on a pro-pot platform, with ‘Weed out the competition’ as her campaign slogan. “Rocks” finishes on a humorous note, as do most of the other nine plays. They’re not knee slappers, but engaging, warm humor arising from human foibles and fallibility.

One of the plays ends with “This is gonna be fun.” It sure is. They all are. You will leave this deca-delight on a high whether or not you vote for Evie’s hash brownies.

Here is how it works: Go to www.BarringtonStageCo.org to purchase tickets for one of the remaining start times: Thurs. March 18th and Fri. 19th at 7:30pm; Sat. 20th at 3pm and 7:30pm; and Sun. 21st at 3pm. Your password link will be emailed a half hour before the time and you will have unlimited access for 24 hours, during which you can take breaks between plays, as I did, or even re-watch one or two favorites…as I did.