“Not to put any pressure on you, but the entire American theater is depending on you to be smart.” Thus spoke Kate Shindle, president of Actors Equity, to the cast of “Godspell,” the first live production her union has authorized since the nationwide shutdown in March. And smart they were on opening night last week at Berkshire Theatre Group’s Colonial Under the Tent facility in Pittsfield, Massachusetts.

Smart, and smartly prepared to perform the 1971 musical chestnut within the boundaries decreed by the state of Massachusetts and by Equity (eight of twelve cast members and two Stage Managers are members) without dampening the show’s live-ness. In fact, for this audience member at least, the restrictions, including spittle shields, sometime masks and social distancing, became incidental to the performance about ten minutes in. (Massachusetts limits attendance at outdoor events to 100, capped here at 75.) 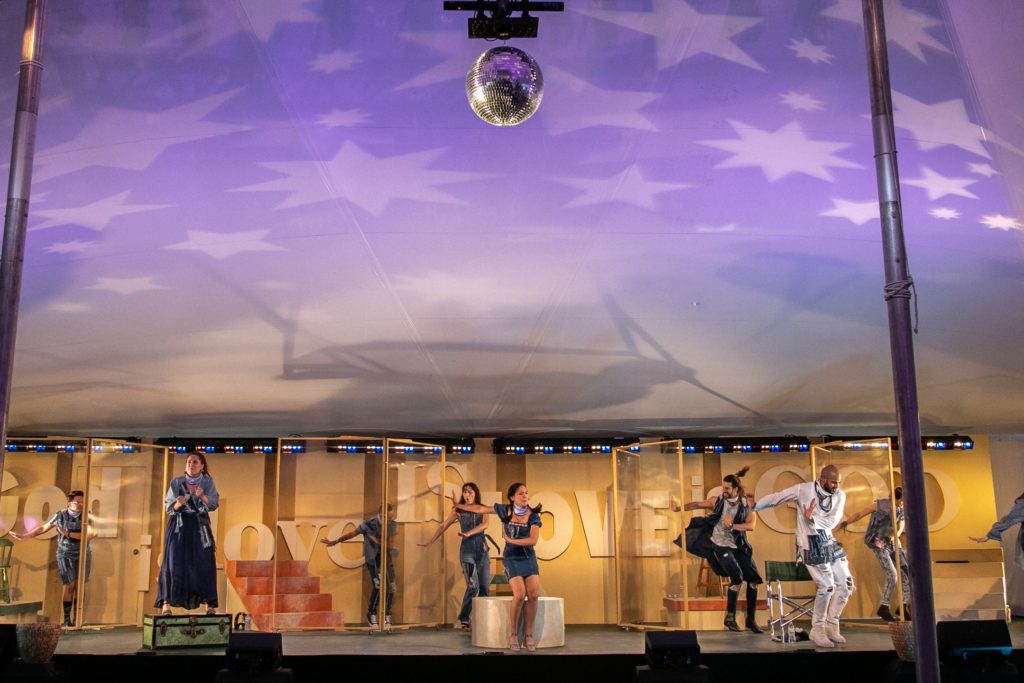 Each actor has his/her own pod behind a sliding panel six feet from those adjacent. Most of the action and musical numbers are performed at front stage, 25 feet from the first row. During backup singing, the panels protect the downstage singers from saliva-droplet spray. The panels are clear as air (and wiped during intermission), and Nathan Leigh’s marvelous sound design is not affected at all.

“Godspell” was one of several biblical-themed musicals from the 1970s, joining “Two By Two” (Noah’s Ark), “Superstar” and “Technicolor Dreamcoat” in that decade. It began as a non-musical master’s thesis by John-Michael Tebelak and was workshopped at Café La Mama, where Stephen Schwartz (“Pippin,” “Wicked”) added music and lyrics. The show then moved to an off-Broadway house, where it ran over five years before moving to Broadway, for another year run.

Based on the Gospel According to St. Matthew, “Godspell” depicts a series of parables acted out in oft-updated contemporary language and meshed with Schwartz’s folk/rock/gospel score. Despite some negative-to-scathing reviews, the upbeat and spiritually unassailable show became a staple of school, church, and community theater groups. The simple concept has a group of young disciples (originally hippie types) learning from Jesus to cast neither the first stone nor pearls before swine, but to turn the other cheek and help thy neighbor. Morality counselling and an appropriate song accompany each lesson. Indeed, one of the songs is “Learn Your Lessons Well,” sung – and tap-danced! – by the delightful Kimberly Immanuel. 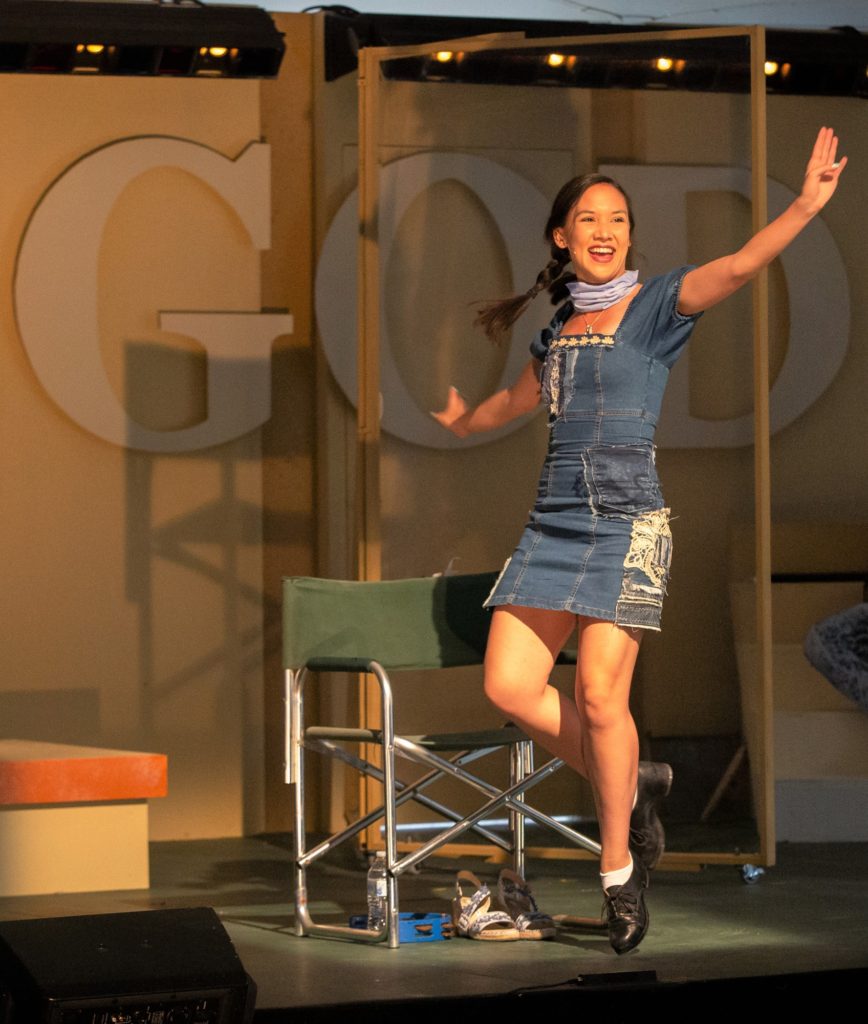 Necessarily avoiding theshow’s usual touchy-feely ambience, its  text is more sermon-like (not to advantage), but Nicholas Edwards’s Jesus is an ingratiating fellow, whose “All For The Best” soft-shoe vaudeville turn with Judas (Tim Jones) is a highlight. The two eschew canes for yardsticks, ensuring the six-foot mandate. 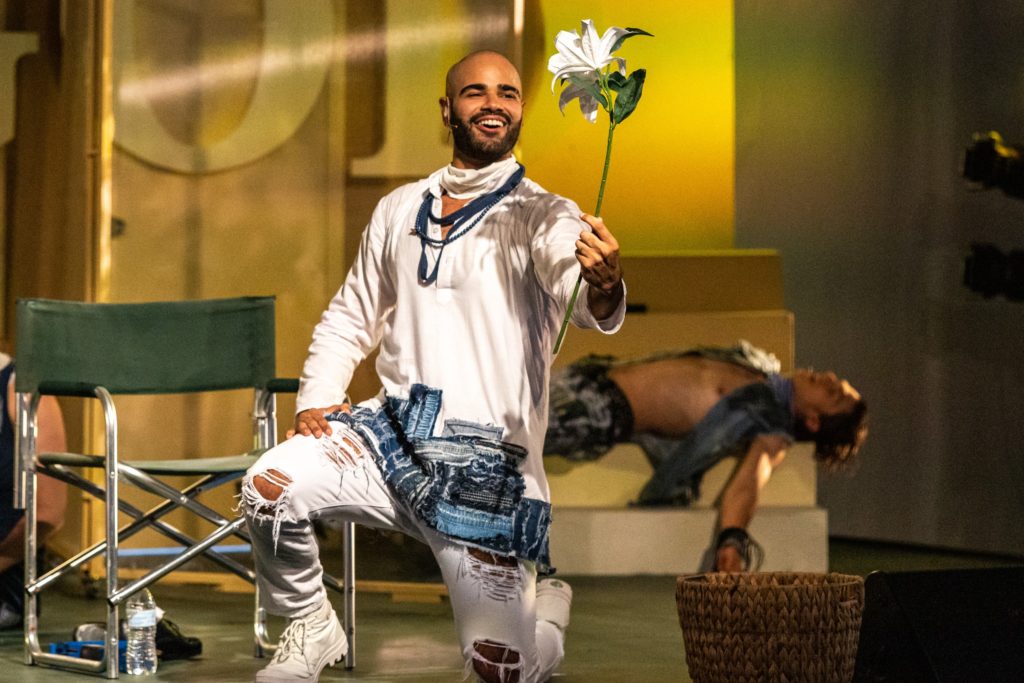 Guided by musical director Andrew Baumer, all the numbers, directed front, are welcome bridges between the parable scenes. The show’s breakout hit, “Day By Day,” is Isabel Jordan’s shining moment, and Emily Koch stops the show with her full-out Gospel-rich “Bless the Lord.” The tone-pure ensemble aces the eleven o’clock number “We Beseech Thee.” Obviously a labor of love for director Alan Filderman and choreographer Gerry McIntyre, “Godspell” accomplishes its goal. Their fresh young cast, working under unique restraints, extract a heap more spirit and pleasure from the show than any I’ve seen – or could imagine – before.

Alex Getlin during “We Beseech Thee”

The passage of time burnishes memory. In 1959 I saw Ethel Merman’s first public performance in “Gypsy,” and on August 10, 1987, the 5,000th performance of “A Chorus Line.” Breaking a five-month fast last week with “Godspell” does not rank with those, but under the circumstances, it was and will, I suspect, remain meaningful. Who could have predicted back in 1970 that fifty years later, John-Michael Tebelak and Steven Schwartz’s unassuming musical homily would be, for a few weeks anyway, the most famous play in America?

[Through September 4 at Berkshire Theatre Group Colonial Under the Tent, 111 South Street, Pittsfield Massachusetts. Performances (many sold out) Tues-Fri at 7pm; Sat and Sun at 1 and 7pm. Phone for reservations (All seats $100): 413-997-4444]