What Would You Do?

A column by Ginia Bellafante in the Metropolitan Section of  the  Sunday May 31 New York Times about last week’s Central Park incident between bird-watcher Christian Cooper, who is black, and white dog-walker Amy Cooper (unrelated) reminded me of an exchange with the Times from twenty years ago.

In the Central Park contretemps, after Christian C asked her to leash her dog (required by law), Amy C unleashed her inner vitriol in an hysterical 911 police call against a bogus color-coded threat. (Google either name for details.) In her column, Ms. Bellafante suggested more temperate options that Ms. Cooper could have employed: rolling her eyes while complying; dissing birds in general; and “giving him the finger and moving on.”

Twenty years ago, on Sunday, July23, 2000, another Times column about action-and-reaction choices was headlined “What Would You Do?”  In it, columnist Peter Applebome presented what he called “a little real-life morality play about suburban life and manners.” 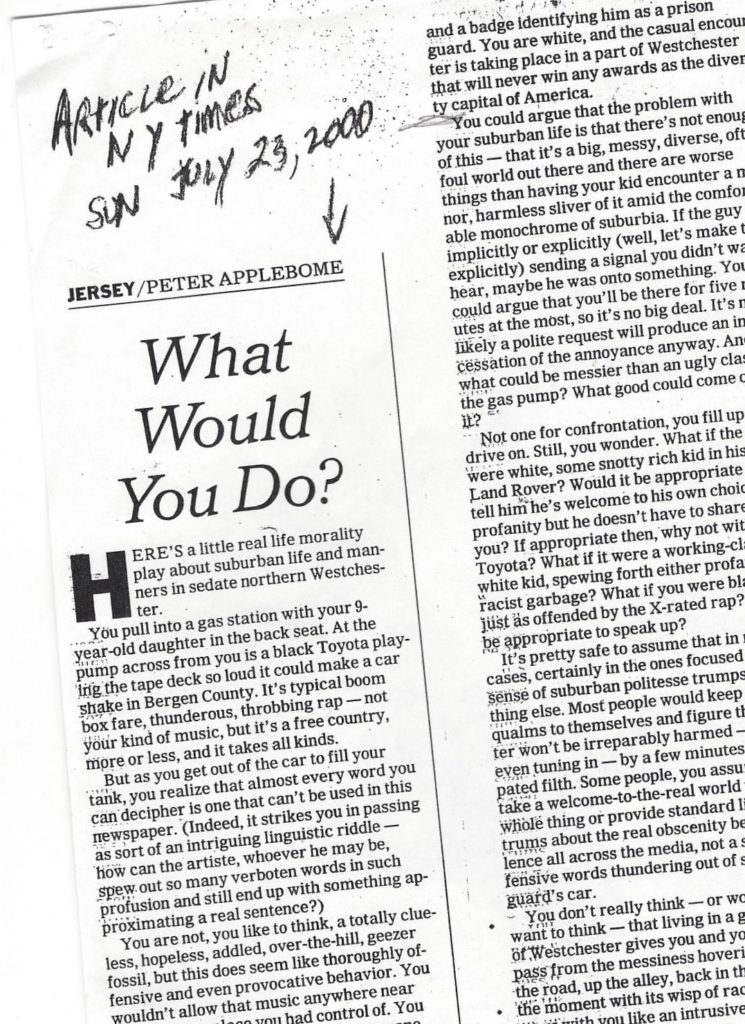 In the piece, which I will quote from to establish its points, Mr. Applebome described pulling “into a gas station with [his] nine-year-old daughter in the back seat.”  At a nearby pump, a Toyota’s tape deck is “so loud it could make a car shake.” It was, he wrote, “typical boom box fare, thunderous, throbbing rap.” Not Applebome’s kind of music, but “…it takes all kinds.”

As he got out of his car he realized that “almost every word” was one that the Times wouldn’t print. He’s not, he said, a “totally clueless…geezer fossil,” but the rap volume “does seem like thoroughly offensive and even provocative behavior.” [Italics mine.]  “You wouldn’t allow that music anywhere near your kids” or “consider imposing it on someone else.” Should he, he asks, “live with it…or politely tell the other driver you wish he’d keep his music to himself?”

Then he adds what he calls “a complication.” The driver is “a large black man with his shirt mostly unbuttoned in the mid-afternoon heat and a badge identifying him as a prison guard.” [You see where this is going, right?] Applebome, noting that driver #1 (himself, in context) is white, points out that that part of Westchester “will never win any awards as the diversity capital of America.”

He does suggest that more diversity would be good and that there are worse things than “having your kid encounter a minor, harmless sliver” of the “often foul world out there.” Would his daughter be irreparably harmed – “if she’s even tuning in” – by “a few minutes if syncopated filth?” After all, he concedes, it is real violence, not offensive words “thundering out of some prison guard’s car,” that is the “real obscenity.”  And “What could be messier than an ugly clash at the gas pump? What good could come out of it?” There are “millions of questions that a brief encounter can produce.” Thus rationalized, and being “not one for controversy,” he filled up and drove on.

“So, dear reader,” his column concludes, “over to you. Is there a real dilemma here,” he asks, “or just white-bread squeamishness? What would you do? Why would you do or not do it? You can reach me at [his email address].”

Two weeks later, on Sunday August 6, 2000 the Times published thirteen responses, including mine. Take a pause here to think about your own response. (Mine below.)

Some of them advised to just ignore the discomfort, to “roll up the windows and explain why to the child,” one said. A few were fearful: “…you just never know who will…pull a gun or baseball bat or whatever” and “Why risk an altercation?” and “…too much rage floating around in society to risk…your life.” One man actually “would have left and found another gas station, letting the owner know why.” (We can assume he wasn’t all the way on E.) 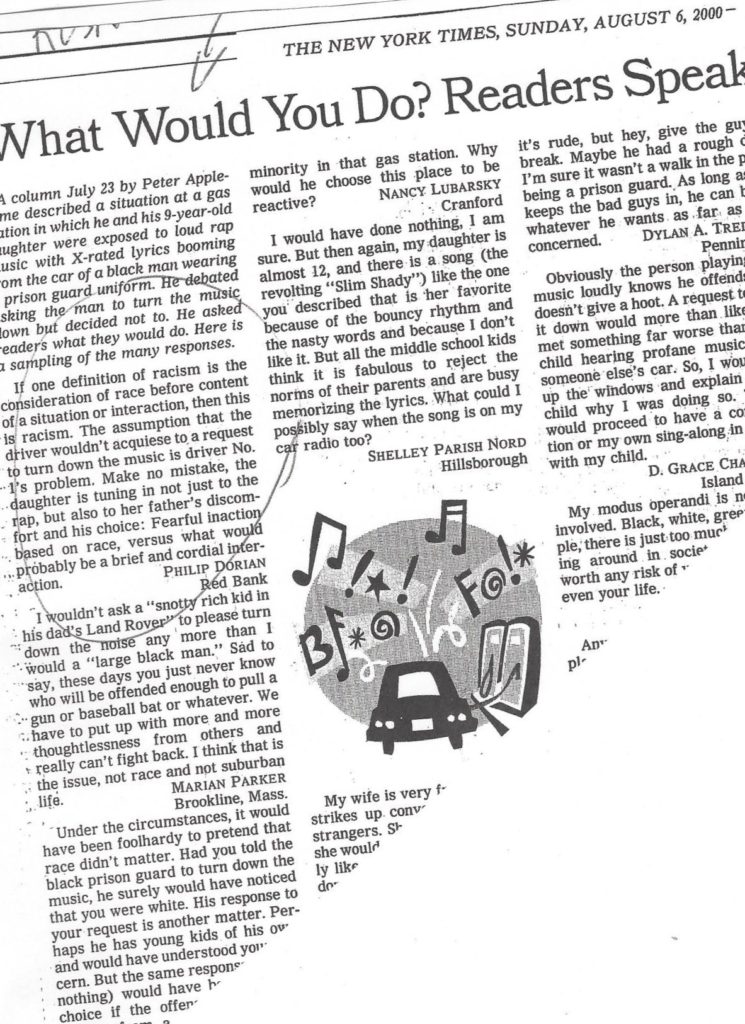 My favorite was from a woman, presumably white, who wouldn’t have done anything because her own 12-year old daughter and her middle-school friends were in thrall to rapper Eminem’s  “Slim Shady,” because, she wrote, “of the bouncy rhythm and the nasty words and because I don’t like it. What could I possibly say,” the cool mom concluded, “when the song is on my car radio too?”

And my letter, which led off the responses:

“If one definition of racism,” I wrote, “is the consideration of race before content of a situation or interaction, then this is racism. The assumption that the driver wouldn’t acquiesce to a request to turn down the music is driver #1’s problem. Make no mistake, the daughter is tuning in not just to the rap, but also to her father’s discomfort and his choice: Fearful inaction based on race, versus what would probably be a brief and cordial interaction.”

That’s it. No profundity here. Clearly, Amy Cooper shoulda just flipped the bird guy the bird and moved on.