Politics As Usual? Not in “Radio Golf”

All ten of August Wilson’s American Century Cycle plays are not created equal, but just as the non-star players on a championship team are essential to its success, so are all the plays integral to Wilson’s monumental achievement. Precious is as precious does, and treating each of the plays with equal regard is the key to honoring the canon. Two River Theater Company in Red Bank, New Jersey sets that standard.

Even ardent fans of the Cycle are unlikely to ferret out a production of “Radio Golf” among the mazes of “Fences” and “Jitney,”  so it behooves those Wilsonphiles to get themselves to Red Bank, where “Radio Golf” is running until March 22. The lesser-known Wilson play is Two River’s sixth in their drive to join the clutch of Regional venues to have produced all ten Cycle plays, a mission I suspect they will accomplish in 2024. As they have done since inaugurating their quest in 2013 with “Two Trains Running,” Two River has assembled a fine cast and engaged dynamic director Brandon J. Dirden to mold them into a superb unit.

Premiering between 1982 and 2005, each Cycle play chronicles aspects of the African-American experience in a particular decade of the Twentieth Century. Nine of the ten, including “Radio Golf,” are set in the Hill District of Pittsburgh, Wilson’s own origin city. Coinciding with the decade it represents, the 1990s, “Radio Golf” was also the playwright’s last-produced Cycle chapter. It premiered in April 2005 at Yale Repertory Theatre; August Wilson died the following October from liver cancer at age 60. (The Broadway opening was in April 2007.)

While specific to their time and place, Wilson’s themes resonate universally, much as do Shakespeare’s (a not ill-advised association). A drama about conflicting personal values and political expediency, “Radio Golf” certainly speaks to our current time.

Harmond Wilks (Carl Hendrick Louis) is campaigning to be Pittsburgh’s first black mayor. As prime mover of the redevelopment of the blighted Hill District, he has a pretty good shot. His campaign-manager wife Mame (Amber Iman) and realtor-partner Roosevelt Hicks (Robbie Williams) share his confidence. With Barnes and Noble, Whole Foods and Starbucks already signed on, what could go wrong? 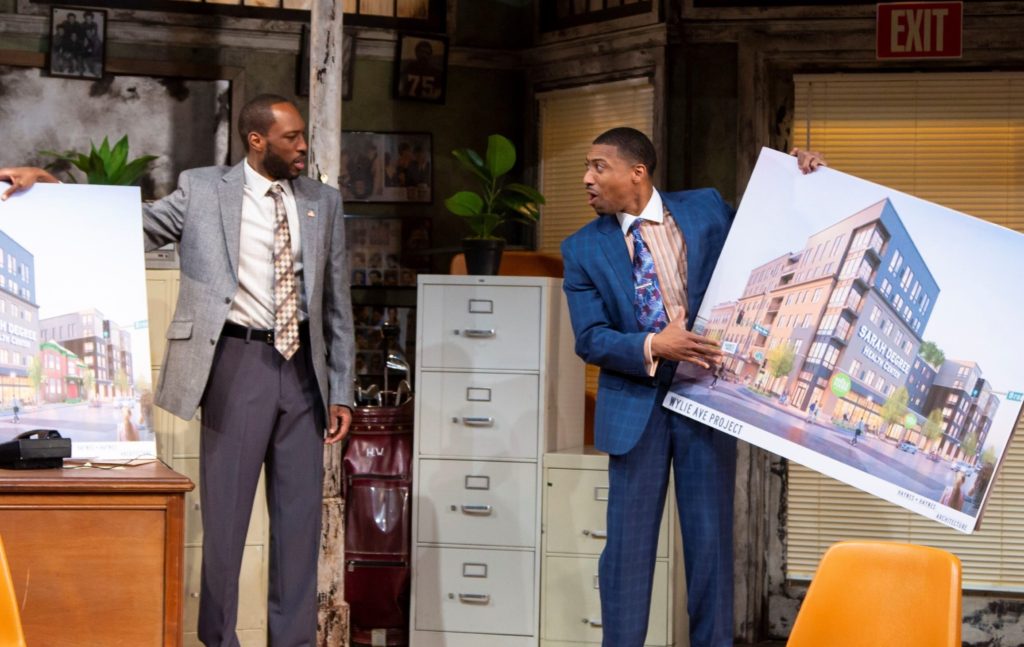 Enter Elder Joseph “Old Joe” Barlow (Wayne DeHart), who, backed by self-employed contractor and neighborhood handyman Sterling Johnson (Nathan James), claims ownership of a house on the re-development site that is slated for demolition. The crux of the story concerns the acquisition and subsequent disposition of the house, whose historical and cultural significance exceeds its modest dollar value.

In the interest of preserving the mystery, a genre in evidence, we’ll say only that a conflict of wills and values arises between those who would proceed under questionable ethics and even legality, and those for whom fairness and the rule of law are paramount concerns. The several debates on those topics are stirring and engrossing. It is not just a case of good vs. bad or right-and-wrong; compelling points are made on both sides and the outcome, as in all of Wilson’s plays, is inevitable. 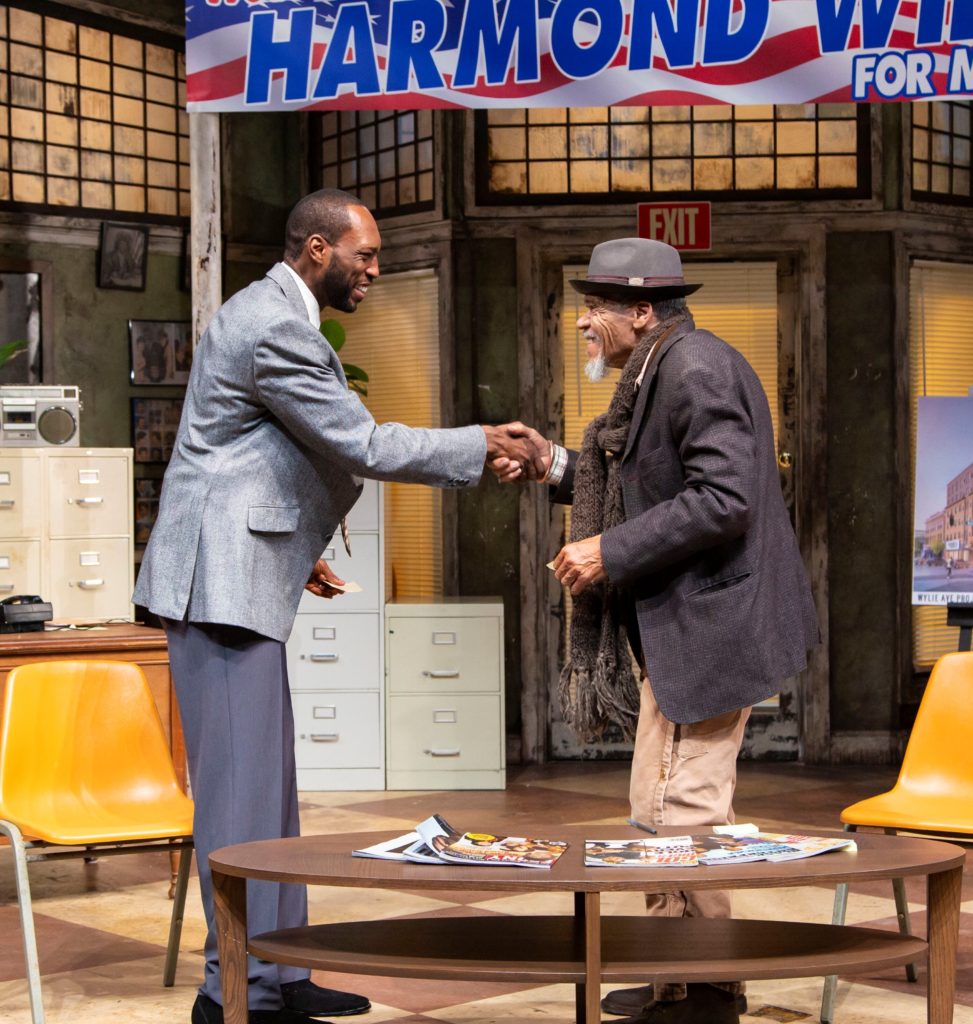 Also as in all the plays, there is an abundance of humor.  Roosevelt’s preoccupation with his golf game, which he extols on a radio broadcast, and him needing to keep his parked car in sight are lampooned, and Old Joe, seeming a bit dotty but really sharp as a tack, is a master of the non sequitur. “I have something for you,” Harmond tells him. “It ain’t no bread pudding, is it?” Joe replies, apropos of nothing. “I was just thinking about some bread pudding.” Mr. DeHart’s timing is exquisite. Mr. Louis exposes Harmond’s ambition and ambivalence, while Ms. Iman’s Mame is alternately encouraging and critical. Their political marriage is as real as any in today’s news.  And it all plays out on designer Edward E. Haynes, Jr.’s expansive set, a fully realized real estate/political campaign office.

Mr. Williams plays Roosevelt’s go-along to get-along philosophy airily until the pot boils over and he goes all-in. Sterling is the odds-defying defender of principle. Mr. James’s rapid-speak can be problematic, but he is a compelling Cochise avatar.

Brandon J. Dirden is a master of the August Wilson book. At Two River alone he has acted in “Ma Rainey’s Black Bottom” and directed “Seven Guitars” and “King Hedley II.” Under his sure hand, the tension, humanity and humor of “Radio Golf” coalesce into a gripping whole. The play and playwright could not be better served.

Embedded in Wilson’s plays are pearls of wisdom – profundities, couched such that you don’t question the source. Late in “Radio Golf,” Harmond tells Sterling “I know how the game is played. I know the rules.” “But do you know when the game is over,” rebuts Sterling. “When you in an argument the best thing to do is to stop arguing.” Referencing a difference he’d had with someone, Sterling concludes “He ain’t had enough sense to see what I was saying, so I say ‘You right.’ And walked away.”    Wouldn’t [any of us] be better off following that advice.