“It’s Better Than the Movie”: Memories That Linger

With no Theatre to cover due to this nasty fellow… 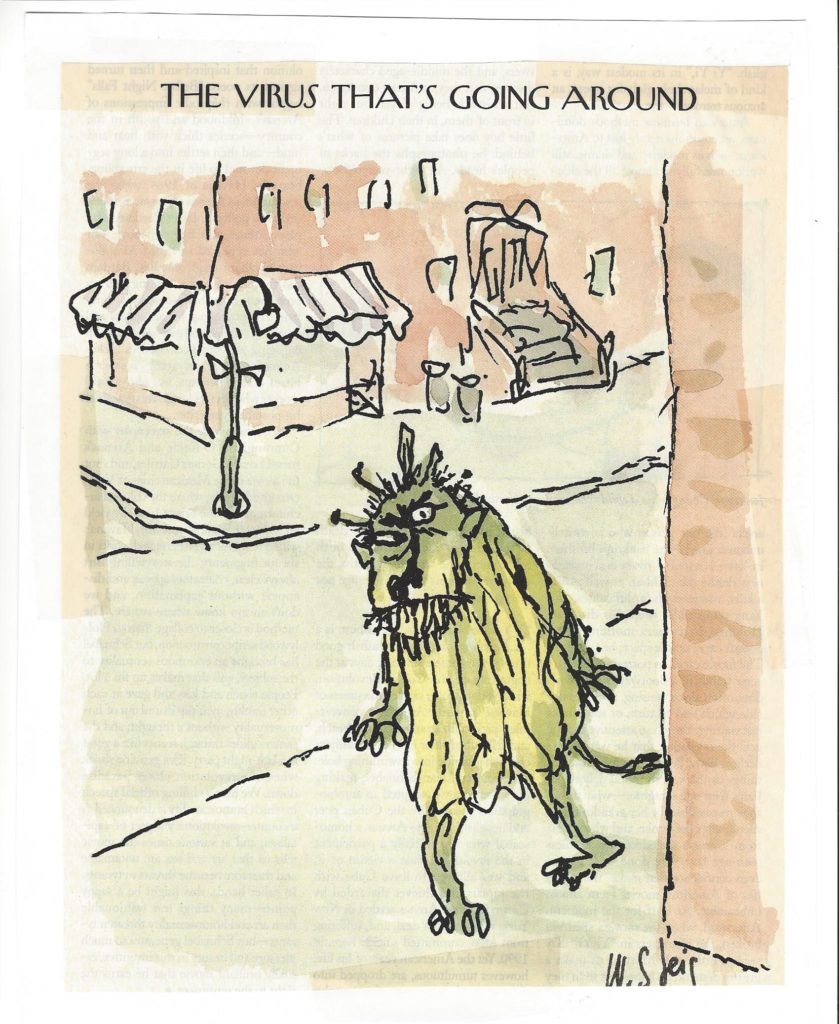 …I’ll share a few excerpts from “It’s Better Than The Movie,” my work-in-progress anecdotal memoir:

July 1956: I was an apprentice (as interns were then called) at Theatre-by-the-Sea in Matunuck, Rhode Island, one of the New England summer theaters then on the weekly star-package circuit. Unlike resident stock companies, where the same actors appear in a slate of plays back-to-back, the “packaged” shows toured intact, with complete casts except for small roles which were played by each venue’s own people, who also built the sets to specifications. (An advance director would cast and rehearse the locals a few days prior.)

One afternoon that summer, another apprentice, Pamela Gordon, and I were sitting cross-legged on the ground opposite one another, washing out paint cans to neutralize them for fresh colors. I was wearing old khakis, Pamela a long purple skirt bunched at her knees. Billie Burke, appearing that week in “Solid Gold Cadillac,” approached us. “That color [the purple] is unbecoming to you, young lady,” she said. “Well,” Pamela replied, “it’s old and I’m just washing out these paint cans.” Billie Burke drew herself up: “Mrs. Florenz Ziegfeld has just told you that your skirt is unbecoming to you,” she said and walked away. Pamela got up, went inside and changed.

I appeared that summer in “Solid Gold Cadillac” as well as in “Anastasia” with Delores del Rio and Lili Darvas; in the irrepressible Beatrice Lillie’s “Beasop’s Fables” revue; and as Ralph (a substantial role) in “Tea and Sympathy” with Mary Fickett (who had replaced Deborah Kerr on Broadway). 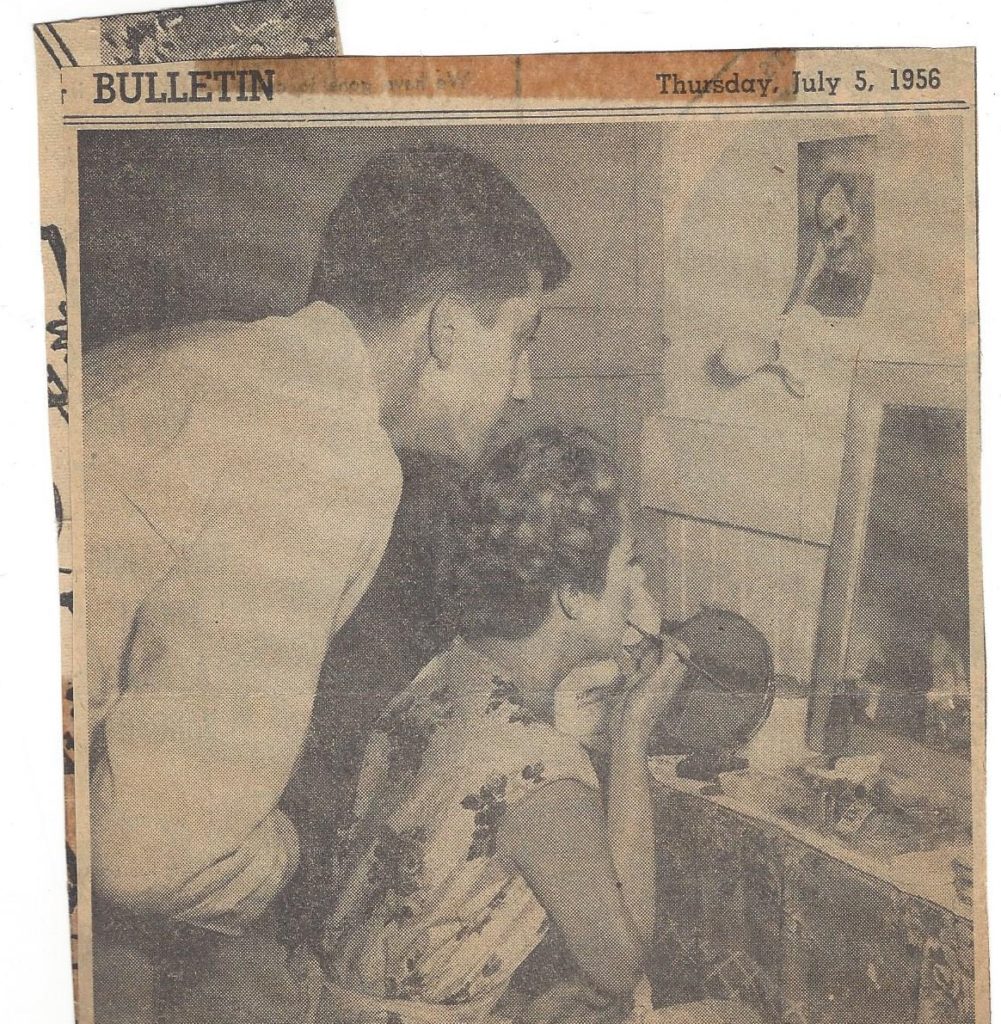 In Mary Fickett’s dressing room (as if). A publicity shot for the Providence Journal. (I was a Rhode Islander.)

Most adventurously, I played several bits with the legendary Tallulah Bankhead. Her “Welcome Darlings” followed a week of Ballet Theatre with Nora Kaye and John Kriza (Watching “Rodeo” and “Fancy Free” from the wings? Priceless.) and preceded Art Carney in “The Seven Year Itch.” Tallulah’s “Original Revue” included a sketch in which she played Peter Pan. It was a timely spoof: The play had run on Broadway in 1950 with Jean Arthur and Boris Karloff (and five songs by Leonard Bernstein) – and the Mary Martin musical, directed and choreographed by Jerome Robbins, had opened in October 1954. (Curiously, it ran only about six months.)

In the Peter Pan sketch, Tallulah mock-flew into the Darling children’s bedroom and woke up Wendy.

[Wendy: “What’s a fairy, Peter?” Tallulah/Peter: “When the first baby laughed, its laugh broke into a million pieces and became fairies so that now there is one fairy for every boy and girl…I will never understand the appeal of this play.”]

Then Peter woke up little brother John. That was me. I was pre-set in a small bed placed head to foot downstage, blocking audience view of the whole bed. I was scrunched up under a blanket, dressed in drop-seat long johns. When Peter Pan stood by the bed and said “Wake up, dahling…I’m going to teach you to fly,” I was to get up from the bed, stand to my six-foot height in that absurd outfit and say “Fly? Nah, I don’t want to fly” and lie back down.

I had rehearsed the bit with the advance director, but not to an audience until we opened. I hadn’t anticipated the prolonged audience reaction when I stood and I took the appropriate pause-for-laugh before saying my line. To kill the hold I yawned and stretched my arms as if I’d been wakened. When the laugh died down I said my line and flopped back onto the bed.

After the show, when the audience had left, Tallulah boomed from her dressing room: “Where’s the Peter Pan boy?” (Imagine that foghorn voice calling out.) Over and over she yelled it until someone came outside and got me. I went into her dressing room, where she stood in a flimsy, open robe. She placed her hands on my shoulders and said dramatically, “You waved your arms. You stood and waved your arms. That was not rehearsed. No one stands and waves their arms when Tallulah Bankhead is on the stage. Don’t ever forget it. Now you may leave.” I left. And never forgot it.

In December 2003, by then a theater critic, I mentioned to an acquaintance of, shall we say, haughty theatrical taste, that I had seen “Never Gonna Dance” a few days prior. “Oh no,” he said, as if commiserating over the death of a pet. “Thank goodness I’ll never have to see that pale Fred and Ginger imitation.”  The following day I emailed him:

Well, you’re right of course, I wrote. Noah Racey and Nancy Lemenager are no Fred and Ginger.  Who could be? And who would even venture the comparison if their show weren’t based, however loosely, on Fred and Ginger’s “Swing Time”? So don’t bother to see it. You won’t be missing a smash hit, though the leads are competent dancers, to be sure, and Karen Ziemba is excellent, as always. [She won the Outer Critics Circle Supporting Actress Award for it]. The book is just romantic fluff, and the scenery is on the cheap. The most familiar songs [all by Jerome Kern with various lyricists] are bunched in the first act, and Racey’s outstanding opening dance number, the character’s initial encounter with the rhythms of NYC, isn’t matched throughout.

But…BUT…If you must see it – if someone forces you, I suggest the following: Zero in on the fine new orchestrations of the Jerome Kern melodies, from the lively overture to the jazzy renditions of such as “I Won’t Dance” and “Pick Yourself Up,” which are sung and danced by the Broadway ensemble gypsies at the top of their game.

Most important, get seats in row D and invite a young woman recently emigrated from Honduras, who’s never been to a Broadway musical, who’s never before heard any of the songs, who’s never even heard of Jerome Kern, and whose boss lets her go an hour early from her shift [at the Westway Diner on Ninth Avenue] to go with you to the show. 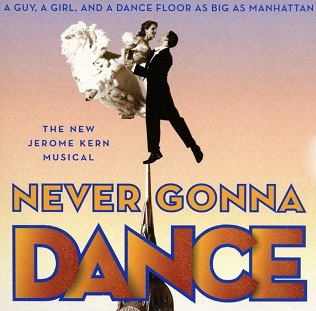 Watch her tense up with anticipation as the house lights dim and the overture begins.  (“I’ve never been this close to an orchestra before.”)  See how she’s awestruck during the upbeat dance numbers and misty-eyed during the ballads. Hear her sigh when the couples divided get reunited, and laugh with her when the glittery confetti falls on and around both of you during the finalé. Notice how she sits agape during the prolonged curtain call (a la “A Chorus Line”), until the last note is played and she looks up at you with her huge, bright, brown eyes and tells you, half in English y media en Espanol, how much she loved the show and how she can’t wait to get home to Astoria to tell her mother about her first Broadway musical.    See it that way, my friend, and “Never Gonna Dance” might become your favorite musical.      Best, Phil

And finally, a more recent encounter:

In the early 1960s James Earl Jones and I were in (different) Broadway plays during the same months. We both hung out with a theater-crowd at Downey’s on 8th Avenue, the Joe Allen of its day, no longer there. Jimmy, as he was known, and I were friendly acquaintances. At the 2008 Outer Critics Circle Awards, where he had won Featured Actor for Big Daddy in “Cat on a Hot Tin Roof,” I re-introduced myself and in the course of some mutual memory-sharing, asked if I could still call him Jimmy. “Of course,” he boomed. “I was Jimmy then and always will be.” Four years later, in May 2012, he won the same Award for playing the President in “The Best Man.” “Congratulations, Jimmy,” I said as I greeted him at the bar, where we chatted again about the ‘old days.’ As I walked back toward my table, a fellow critic got in my face. “You have some nerve,” he said, “calling James Earl Jones ‘Jimmy’.” “We’re old friends,” I said. “We were on Broadway together.”

And may we all meet there again soon…