Composer-lyricist Meredith Willson’s 1960 musical “The Unsinkable Molly Brown” was inspired by an exaggerated tale about the exploits of real-life Titanic survivor Margaret Tobin Brown. While not as successful as Willson’s “The Music Man,” which it followed by three years to Broadway (and which was still running), “Molly Brown” ran for fifteen months on the strength of Willson’s score (Richard Morris wrote the book) and Tammy Grimes’ Tony-winning performance.

Debbie Reynolds was nominated for an Oscar in the 1964 movie, and while Kathy Bates was not nominated for playing Molly in the movie “Titanic,” she was named Blockbuster Entertainment’s Favorite Supporting Actress for the role. (Remember Blockbuster?) 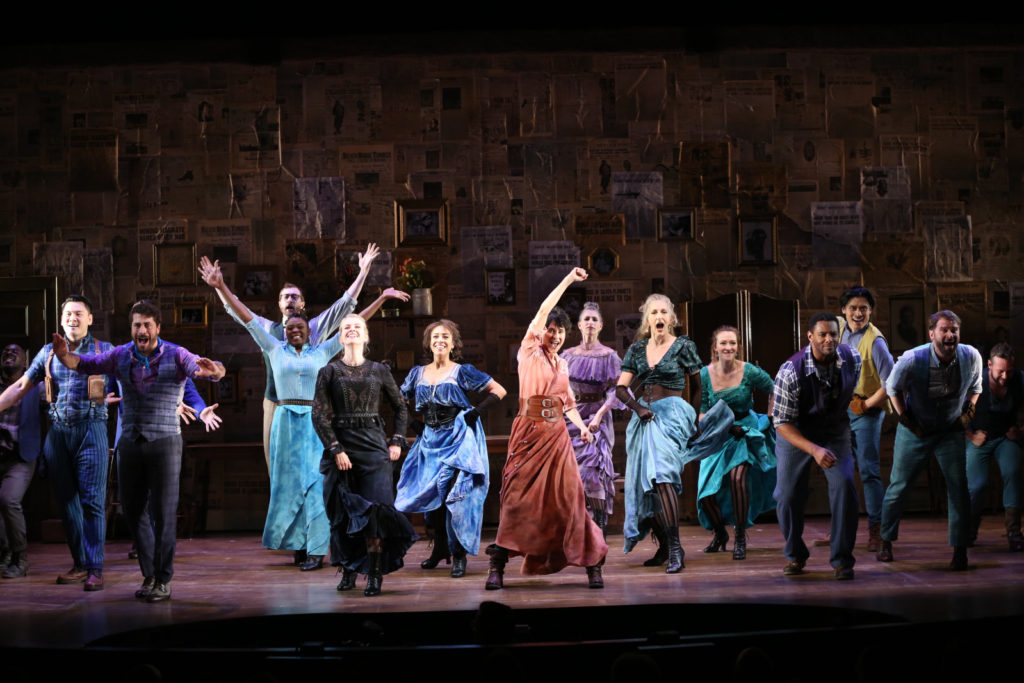 Beth Malone will not be Tony-nominated for the Transport Group’s revival of “Molly Brown,” running through April 5 at Abrons Arts Center, because Tony recognizes only Broadway, and AAC is an off-Broadway house. That noted, Ms. Malone is a sure bet for this spring’s more inclusive Drama Desk and Outer Critics Circle nominations (at least). Her Molly Brown is a ‘Can’t take your eyes off her’ performance.

The original musical was a fictionalized version, with some factual references, but overall a traditional musical comedy. This revival retains seven of the original songs and adds ten others, all composed by Willson, but with mostly new lyrics by Dick Scanlan, who also substantially re-wrote Morris’s book. Scanlan, Tony-nominated in 2002 for his “Thoroughly Modern Millie” book and lyrics, did not ‘darken’ the original “Molly Brown,” as has become a prevailing technique. Rather, he humanized it. Molly and the others are three-dimensional characters in what is now a substantive Play with Music.

No small accomplishment by Scanlan, and an apt framework for Kathleen Marshall’s deft direction and nimble choreography, which spans the spectrum from back-country high-stepping to high-society ballroom gliding. (A woman seated near me lamented the relatively small stage. “If they had more space they could do even more,” she said. Well, yeah…and that may well come to pass.)

Identifying herself with a breezy “Call me Molly,” Margaret Tobin Brown appears in prologue testifying before a U. S. Senate Committee in May 1912 on the month-earlier Titanic sinking. Her refusal to back down from her assessment of the “folly” that enabled the disaster establishes her bold feminist credentials from the start. It’s an effective device that hovers over the rest of the bioplay, as it unfolds in flashback. (Her takedown of the cowardly Quartermaster who commanded her lifeboat foreshadows a later scene, which, staged very simply, makes you feel like you’re in Lifeboat No. 6 with her.) 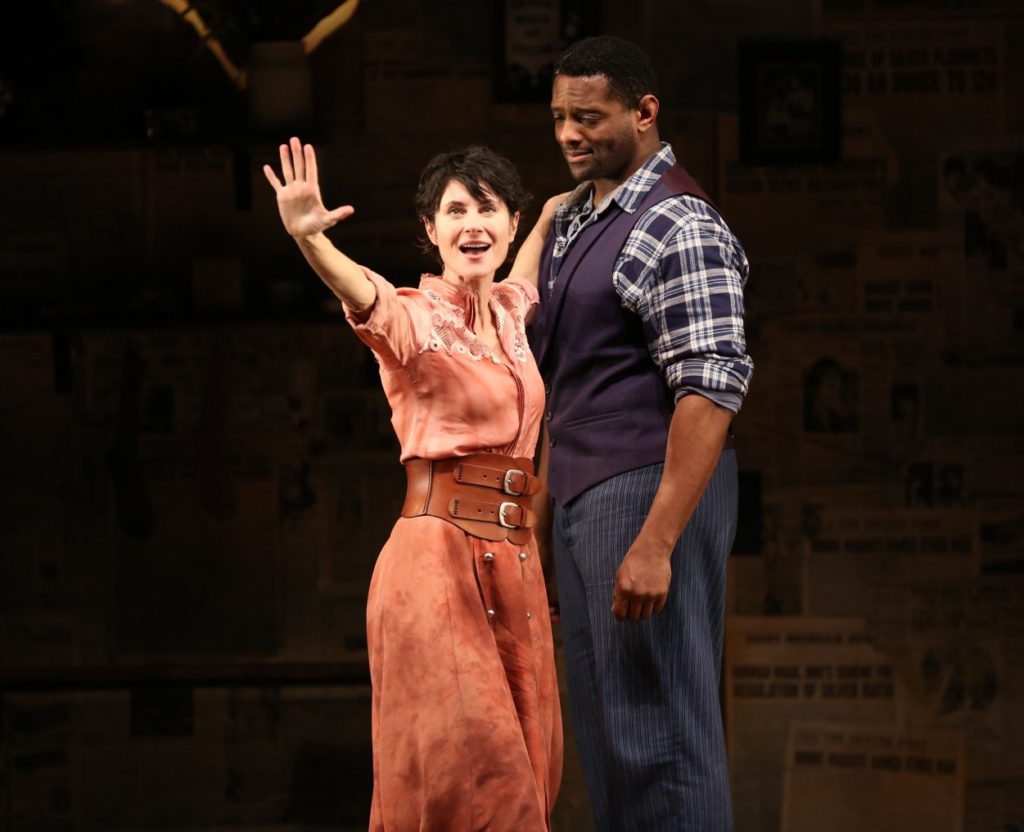 Back to 1886 and the Horace Tabor silver mine in Leadville, Colorado, where that once-precious metal’s value plummeted when the U. S. currency adopted the gold standard. Encouraged by Molly, then just nineteen, the distressed miners finally strike gold, both literally and, in Molly’s meeting and marrying soon-to-be wealthy J. J. Brown (David Aron Damane), figuratively as well.

In those early scenes, Malone’s Molly is a bundle of late-teen enthusiasm and charm. She sings the original score’s “I Ain’t Down Yet” with the hearty chorus of miners, and you know she will prevail. And prevail character and performer do, through Molly’s maturing over several decades, culminating back in the post-Titanic year. The issues that evolve along the way – classism, income inequality and misogyny among them – are not hammered home gratuitously in Scanlan’s dialogue, nor do they need to be in order to resonate today. Ms. Malone is as enthralling a mature Molly as she was as the girlish, cartwheel-turning teenager.

Damane is a stalwart J. J., who shares Molly’s enthusiasm even as he harbors resentment over her dominance. “I’ll Never Say No,” they sing together (another holdover), until J. J.’s fall from grace drives them apart. With Scanlan’s lyrics set to an interpolated Willson melody, “I’d Like to Change Everything About You” is another duet highlight. And let aficionados of the original be assured (and newcomers advised), “Belly Up to the Bar, Boys” is still an ensemble barn burner. (Michael Rafter adapted Meredith Willson’s music, which, played by music director Joey Chancey’s terrific nine-piece orchestra and sung with fresh enthusiasm, is a treat.)

Molly (Beth Malone) and Maureen (Kaitlyn Davidson) in Lifeboat No. 6

Whitney Bashor stands out as Molly’s close friend, and Kaitlyn Davidson is a heartbreaker as the woebegone young woman sharing Molly’s lifeboat. Brett J. Banakis’s minimalist set pieces establish place, and Sky Switser’s costumes leave no doubt about time. Ms. Malone is an absolute stunner in one red gown with silvery accents, designed for her by Paul Tazewell.

There may have been a reason or two to disparage Margaret Tobin Brown in real life, but you’ll not discern one in Scanlan’s script. If that’s a flaw in his dramatization, so be it. But from “Call me Molly” at the start to her closing admonition to “Be calm, never settle…we ain’t down yet,” Beth Malone is nigh flawless as the woman who rejected the notion that it was a man’s world. Her buoyancy may well float this production uptown.

Note: Even though Molly Brown is a commanding lead role, Tammy Grimes’s 1961 Tony Award was for Featured Actress, because performers billed below the title were considered featured regardless. That same year, Dick van Dyke won the Male Featured Tony – for his leading role in “Bye Bye Birdie.” [David Sheward’s “Big Book of Show Business Awards”]