Sexual Liberation Is So Last Century: “Bob and Carol and Ted and Alice” off-Broadway

The first quarter hour of “Bob and Carol and Ted and Alice” depicts Bob and Carol at The Institute at Big Sur, a  ‘new age-y’ retreat, where the thirty-something couple is converted into a life-style based on a philosophy of “Don’t think. Feel.” No more empirical evaluations or judgements about one’s own or others’ restrictions, motivations, and such as jealousy, recrimination…or the need for clothing. The indoctrination process, overseen by a facilitator in individual and group sessions, is acted and directed in an effective way that makes what follows, while outlandish, plausible. At least in director Paul Mazursky’s 1969 movie in which Bob and Carl are played by Robert Culp and Natalie Wood .

Now there’s the New Group’s off-Broadway musical adaptation at The Pershing Square Signature Center, which strains to replicate the feel of the film, falling more than a bit short. The “B & C & T & A” movie is not in a league with “Tootsie” or even “Pretty Woman,” both of whose stage adaptations felt like outtakes, but it shares with those two a unique quirk that just doesn’t translate to the stage. (It works both ways: think “A Chorus Line” or even “Phantom of the Opera.”)

The problem is not the plot, which tracks the movie. Once indoctrinated, ultra-sophisticated Bob (Joél Pérez) and Carol (Jennifer Damiano), encourage their friends Ted and Alice, here Michael Zegen and Ana Nogueira (Elliot Gould and Dyan Cannon in the movie), to join the ‘feeling’ fold. That judgement-free zone includes a blanket acceptance of sexual liberty. Dealing on stage or screen with extra-marital affairs and couples-swinging is no longer cutting-edge as it was when the film was released, but those are still racy topics. Or should be.

When Bob, un-prompted, confesses to a one night stand on the road with a temp clerk assigned to him (“divorced, making a living” in a sad, dated comment), Carol warmly embraces his  honesty, while Alice, when she hears of it, is outraged. But not for long. What ensues is a tangle of involvement, rejection, guilt and assignations. There are some funny lines along the way, and some would-be R-rated shenanigans, but despite the attractive foursome spending a considerable amount of time in their underwear (more the women than the men – what else is new), there’s a marked lack of chemistry among the four. Considering the material, the proceedings are strictly PG-13. (Mr. Pérez might want to re-think his baggy-whities.) 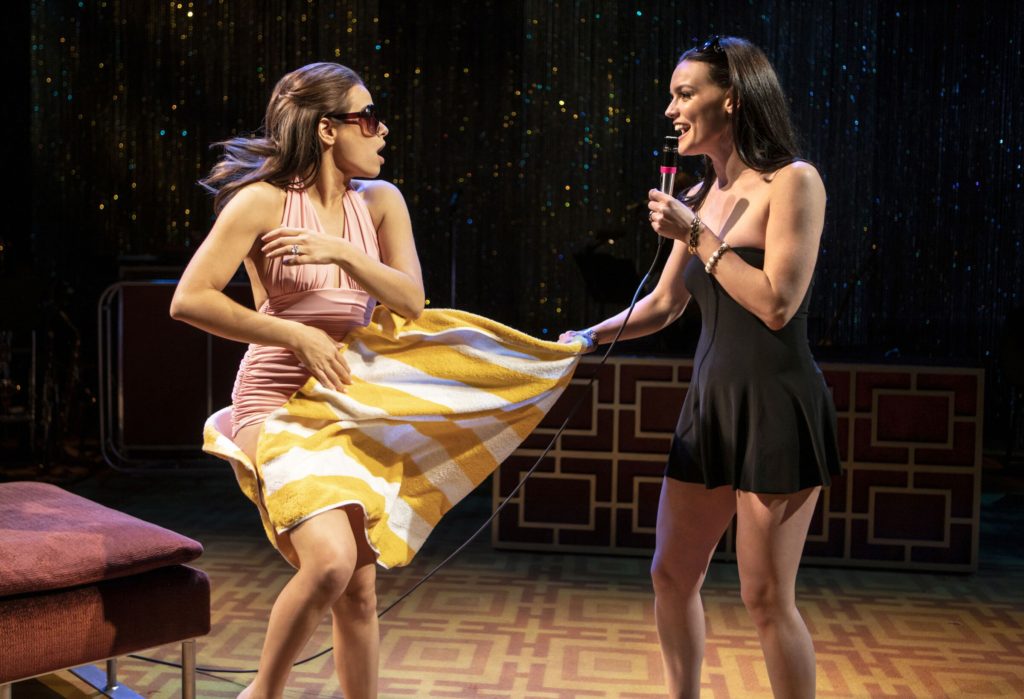 The movie is not a musical, but the play is. Jonathan Marc Sherman’s derivative book is interrupted periodically by Duncan Sheik and Amanda Green’s lyrics set to compositions by Sheik, whose “Spring Awakening” score was game-changing. Here not so much. With the principals maneuvering among microphone stands and hand mics dotting the set, the staging is frequnetly awkward, and the vocals, I guess intentionally, are less projected than crooned. Music director Jason Hart’s four-piece band, amped-up by Noelle Rueschman’s tripling on reeds, fills the gaps nicely, but the songs, mostly narrative, are undistinguished. 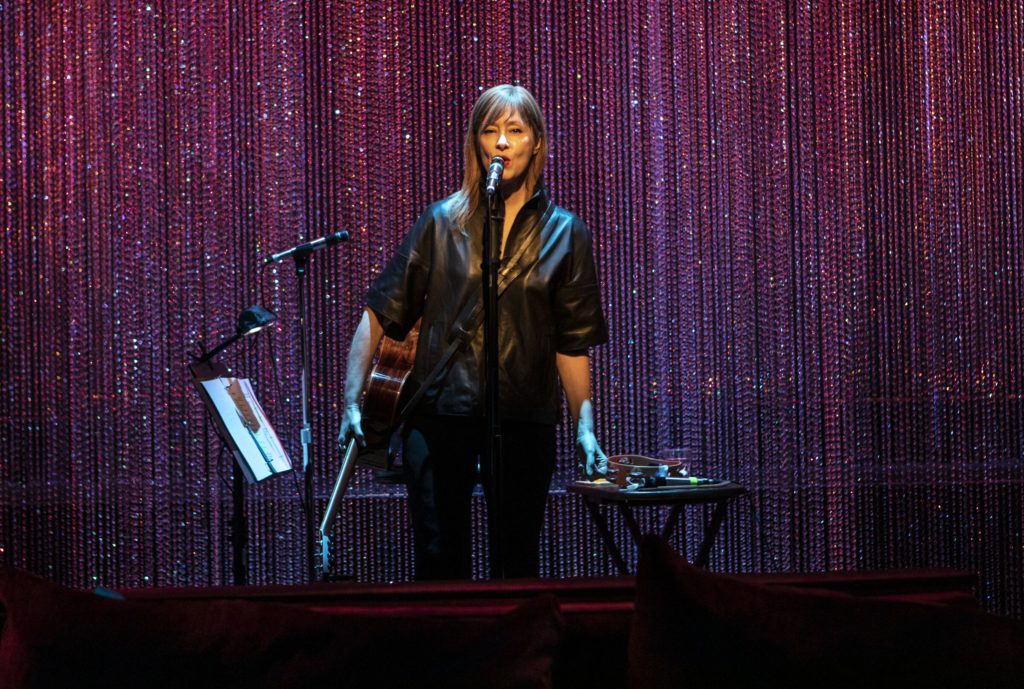 Band Leader (and others): Suzanne Vega

A device that must have seemed innovative has a “Band Leader” (but not really) standing at a mic up center, singing along with some of the songs and speaking as an occasional unseen character – the retreat-moderator for one, Alice’s therapist for another. Grammy-winning singer-song writer Suzanne Vega seems an odd choice for the role, in which every line she speaks is like the others. Her low-key manner barely projects, even on the mic.

Kelly Devine’s musical staging is minimal, and Scott Elliott’s overall direction seems centered on moving the title foursome around as they in turn shove the sofa-and-ottomans set pieces into and out of their bed configuration. 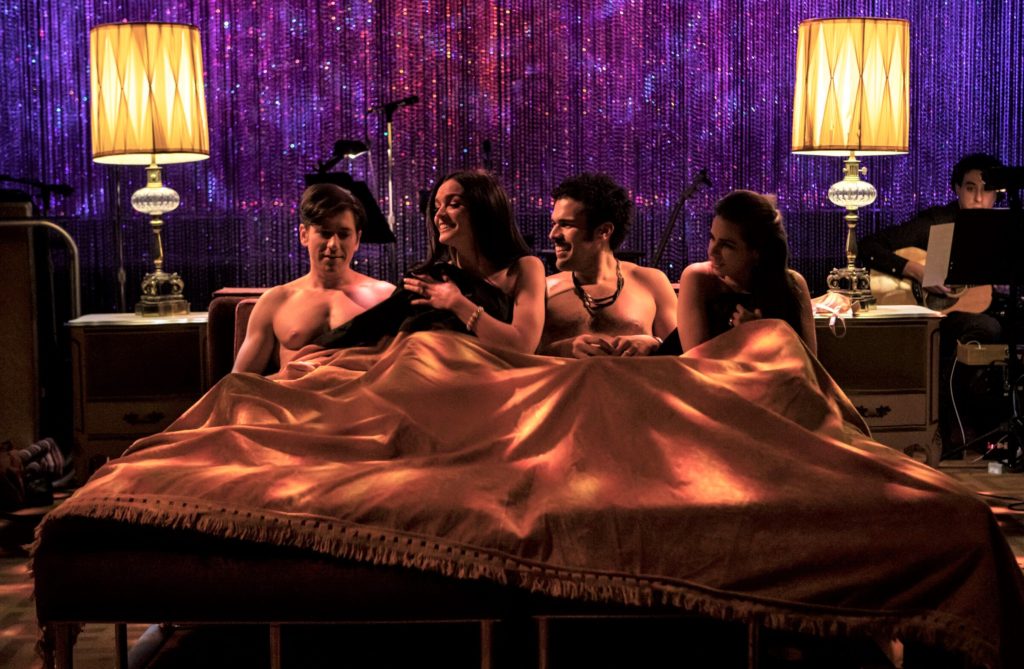 From left: Ted and Carol and Bob and Alice (Not a spoiler – it’s in the ads.)

I recall a lot about the 1960s and ‘70s, some of it with pleasure.  “Bob and Carol and Ted and Alice” did stir up some memories – designer Jeff Mahshie’s spot-on costumes capture the period. But overall, the title foursome was best served on the screen, where their hanky-panky originated.

Be advised:  the characters smoke throughout the show. The cigarettes are herbal, not tobacco, but the smoke-smell drifts into the audience.