Bye Bye Blackface/Send In The Clowns

Ken Ludwig’s 1980s farce “Lend Me a Tenor” revolves around two operatic tenors being mistaken for one another in costume and makeup for the same role. The play is funny…or not, depending on taste. I had always thought it so, until it dawned on me at a 2005 performance (foot-noted below) that two white guys in blackface for the title role of Verdi’s “Otello” being indistinguishable by other white characters because of blackface makeup and kinky wigs was an idea way past its sell-by date.

Fortuitously, playwright Ludwig has come to the same conclusion, pulling the rights to the original and re-issuing it with Canio replacing Othello, Canio being the clown in Leoncavallo’s “Pagliacci.” The new version is just as funny, as evidenced by the nifty production running through January 26 at Westchester Broadway (Dinner) Theatre in Elmsford, New York. Perhaps, with comic ‘takes’ more readable through clown whiteface than Moorish blackface, even more so.

The “Lend Me a Tenor” cast [Photos: John Vecchiolla]

“Tenor” is an expertly constructed farce. The first act, entertaining on its own, leads into second act hijinks, centering around multiple doorways (six on designer Steve Loftus’s fine hotel-suite set) and general chaos, directed with a perfect blend of discipline and free-rein by Harry Bouvy.

It is 1934. The Cleveland Opera Company has engaged famed Italian tenor (and notorious ladies’ man) Tito Merelli to sing Canio in “Pagliacci.” In wine-soaked weariness, Tito passes out and is presumed dead. Max, an aspiring tenor and the producer’s daughter Maggie’s fiancé, is pressed into service to impersonate Merelli and sing the role. Tito awakens and, unaware of the pending substitution, prepares to go on: Voila! (or Ecco qua!) We now have two costumed Canios. Add to the mix Tito’s jealous wife, the opera’s seductive soprano, the star-struck Maggie, and the Opera Guild’s flirty chairwoman, and what could go wrong? Besides everything, that is. 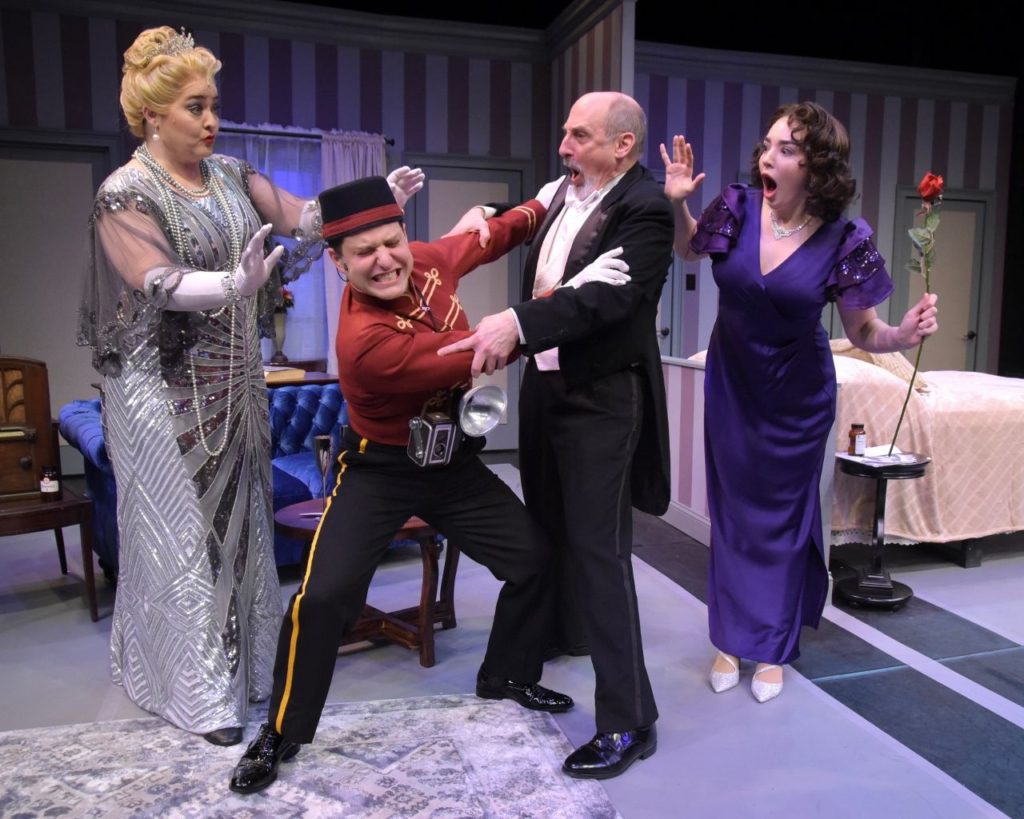 Notwithstanding the prevailing mayhem, the opera is a smashing success, thanks to one of the Canios (Which one? No spoiler here.), before both are pursued and, um, caught, by scantily clad fans.

As the real Tito and stand-in Max, Joey Sorge and J. D. Daw mirror one another – in makeup and costume, sure, but also in postures and gestures. It really takes a moment to determine which is which as they pop in and out of the scenes. Even Tito’s wife, imbued by Kathy Voytko with fiery zest, gets confused.

A Canio (but which?) caught in the act with Maggie (Molly McCaskill)

Maggie is not as prim as she seems, which Molly McCaskill’s delightful performance makes clear. Also, both Maggie and Hannah Jane McMurray’s diva soprano look smashing in – and out of – 1930s evening wear. Philip Hoffman huffs, puffs and sputters appropriately as the beleaguered Opera Company producer; Tregoney Sheperd leaves no doubt that the Guild chairwoman has more than Vesti la giubba on her mind; and Sam Seferian gets his laughs as a wannabe-singer bellhop. 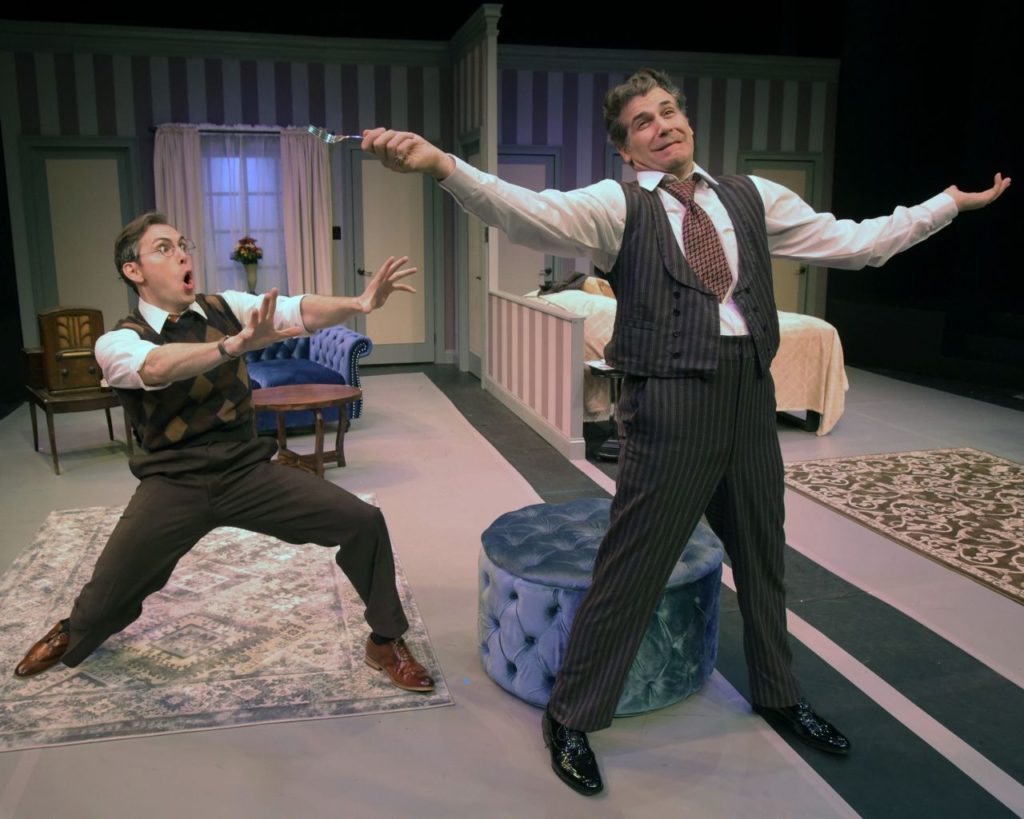 A brief operatic excerpt sung by Tito and Max makes the point that either could play the role, at least in this context. Sorge and Daw are more than farcically adequate to the piece. Overall, it is a great deal of fun, after dining from Westchester’s excellent three-course menu selections, to watch these eight accomplished farceurs enjoying their work. You would too, if your job description was Clowning Around.

Through January 26 at Westchester Broadway Theatre, Elmsford, New York. A varied schedule includes luncheon matinees and evening dinner performances. For information and tickets, which as a January special include dinner-and-show for $57: 914-592-2222.

Footnote: After a performance of the original version at a New Jersey regional playhouse in February 2005, where the two Othellos wore very dark makeup, I asked the director if they had considered doing the play without minstrel blackface. “It’s not minstrel,” snapped the director angrily. “It’s Verdi’s ‘Otello’ in Cleveland in 1934!” “Oh geez,” I replied, “I thought it was Ludwig’s ‘Lend Me a Tenor’ in New Jersey in 2005.” And Black History Month.