New York Gilbert & Sullivan Players: Doing What They Do Best!

Want to be like the New York Gilbert & Sullivan Players? Just pick a niche-market art form and become a world-class expert at it. Founded in 1974, NYGASP’s performance-ready repertory of all thirteen of the writing team’s extant Savoy Operas (a couple were never published), is unique among such companies, and while some of the more popular ones dominate the roster, all are intermittently staged in rotating repertory in NYC and on tour. True to their founding mission of “giving vitality to the…legacy of Gilbert and Sullivan through performance and education,” NYGASP is recognized as the Gold Standard of Gilbert & Sullivan production companies, attested to by the company’s lauded appearances at the annual International G & S Festivals in England. 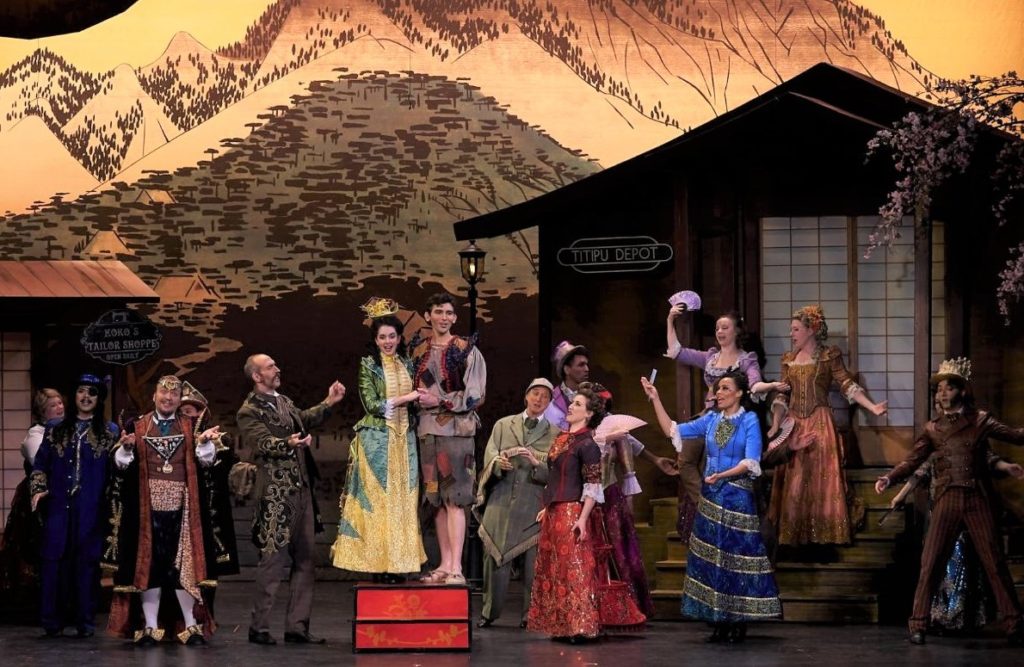 The cast of “The Mikado” [Photos: William Reynolds]

Long in the public domain, the works are fair game for tinkering with style, as Joseph Papp’s NY Shakespeare Festival famously did with “The Pirates of Penzance” in 1981, or with setting, as the New York Gilbert and Sullivan Players has done with “The Mikado,” now in a limited run through January 5 at the Kaye Playhouse at Hunter College.

Perhaps “atmosphere” is more accurate than setting, because while still planted in the (fictional) Japanese town of Titipu, outdated Asian allusions – face makeup, costumes, postures et al – are among the missing. And good riddance to the offensive tags that would now only distract from the lilting music, the swift (and Swiftian) text and the wildly improbable plot, elements that meld superbly in this delicious production. (Besides, one would need to be steeped in Victorian Britain’s repressive policies and mores to gather why the satire needed to be kimono-cloaked in the first place.)

Disguised as “A Wand’ring Minstrel I,” Nanki-Poo (John Charles McLaughlin), heir to his father, the ruling Mikado, has come to town in search of Yum-Yum (Sarah Caldwell Smith), with whom he has fallen in love. (Character names are variously nonsensical or descriptive. Ms. Smith’s is decidedly the latter; her persona and bell-clear soprano trilling mandate it.) 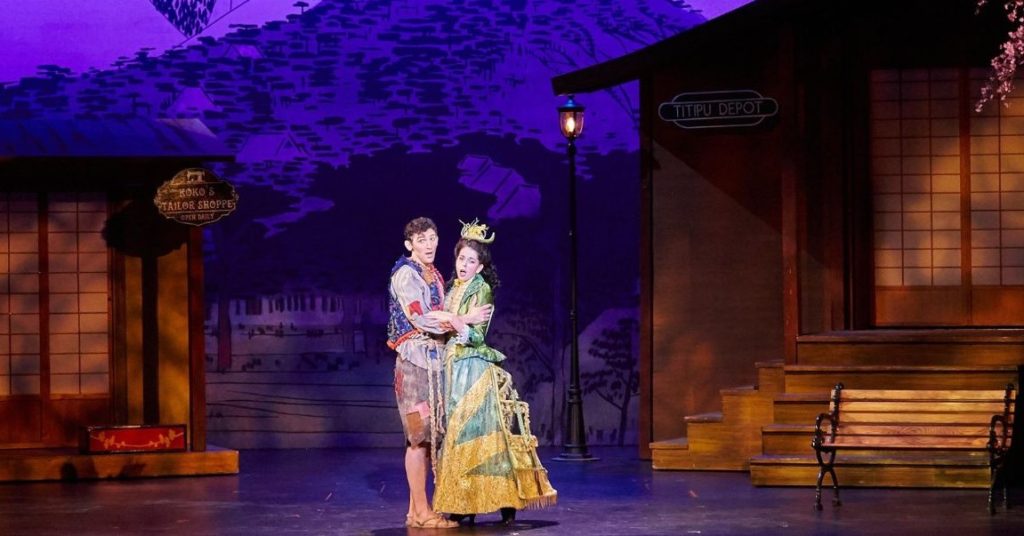 Yum-Yum is affianced to her guardian Ko-Ko (David Macaluso, irrepressible), who, after being condemned to death for the capital crime of flirting, has been appointed Lord High Executioner, in the belief that he will not accomplish his own execution. Nanki-Poo, having won Yum-Yum’s affection, is also condemned under flirt-at-your-own-risk. He is given a thirty-day reprieve to marry Yum-Yum, but another law, specifying that the widow of an executed man must then be buried alive, dampens Yum-Yum’s enthusiasm for matrimony.

These and other such devices have earned “The Mikado” the sobriquet “topsy-turvy.” Librettist Gilbert was a master of literary ‘meiosis,’ drastic understatement that blunts otherwise serious topics or situations, often for comic effect, as in this lyric on flirting being a capital offense: “The youth who…breathed a non-connubial sigh/was thereupon condemned to die.//He usually objected.” 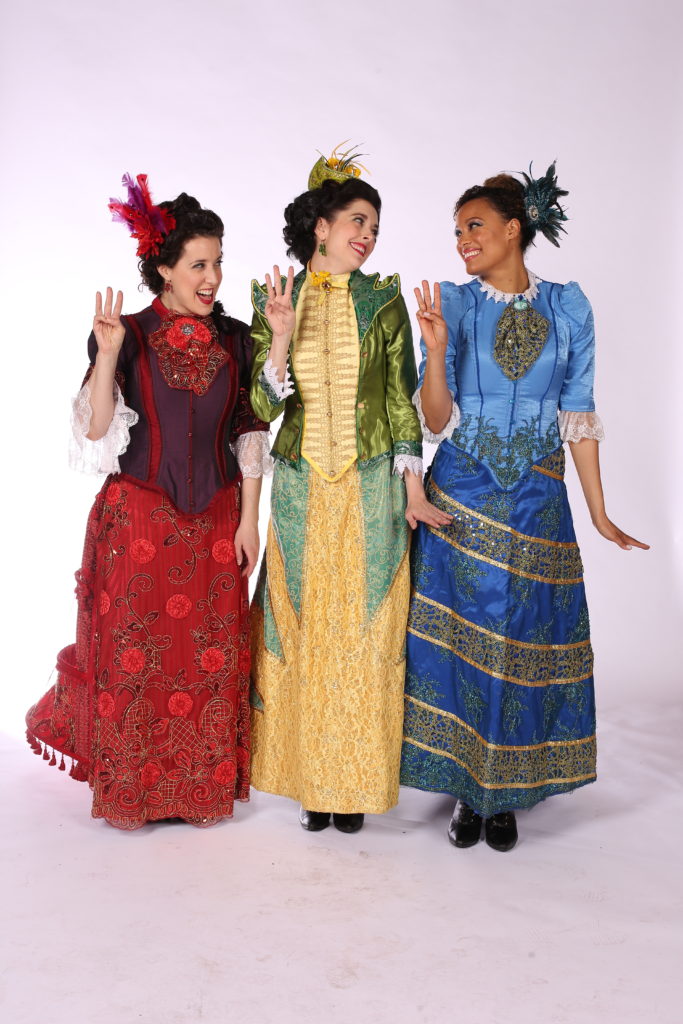 Under David Auxier-Loyola’s smooth direction and choreography, the Victorian origin still allows for modern touches that have become de rigueur in Gilbert & Sullivan productions, a quality that NYGASP embraces. There’s a nod to the absurdity, as well as a sprinkling of liberties within the text. The most famous example of the latter (even beyond “The Mikado”) is Ko-Ko’s solo “As Someday It May Happen.” Known familiarly as “I’ve got a little list,” from its opening lyric, the song is an extended list of “society offenders that never will be missed.” The original list has long been abandoned in favor of topical references, including here millennials, hashtags, OK Boomer,  the “Cats” movie  and, of course, the current resident of the White House, which elicits a round of applause (somewhat muted, we being on Manhattan’s upper east side).  Macaluso (Ko-Ko) clearly relishes the number, delivering it with a sly wink. 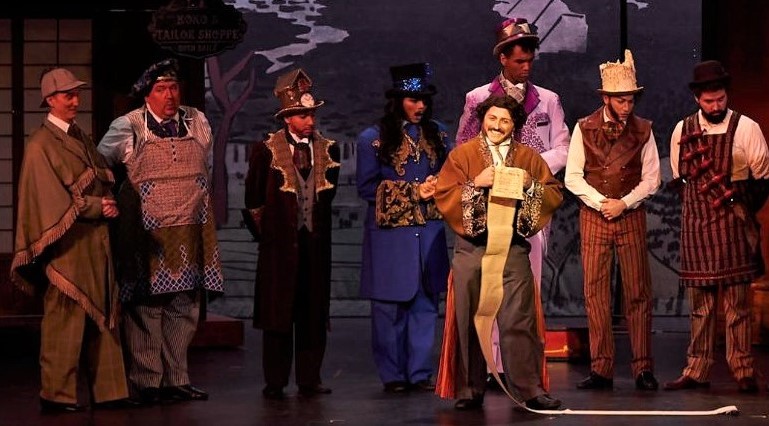 Matthew Wages blusters appropriately as Pooh-Bah and David Wannen is imposing as “A More Humane Mikado.” Cáitlin Burke makes the most of un-PC Katisha’s overbearing way (“Alone, And Yet Alive”), and director Auxier’s turn as Noble Lord Pish-Tush is on target.

Under the musical direction (and baton) of NYGASP founder Albert Bergeret, the singing/dancing ensemble and the 25-piece orchestra are both formidable contenders for Best in Show. 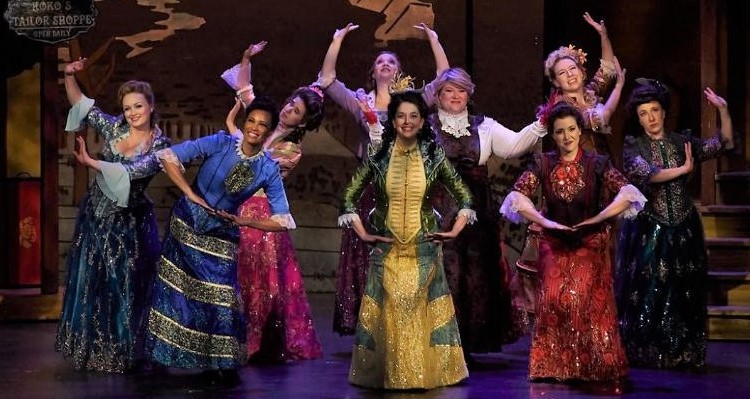 The women of Titipu

Designer Quinto Ott’s costumes hint at a Japanese influence, but ensemble men in caped British tweed (a la Sherlock Holmes), Bavarian-style mufti and the like lend an international tone. The gorgeous women’s costumes are perfectly modelled in a veritable pastel parade.

There’s an episode of “Mayberry RFD” where Floyd the Barber describes a Gilbert and Sullivan operetta to Goober. “It’s got a lot of ginger,” he says. Well, NYGASP’s “The Mikado or, The Town of Titipu” has a ton of ginger.

The original Odd Couple? Playwright/lyricist Sir William Gilbert’s notorious rudeness kept Queen Victoria from knighting him at the same time as composer Sir Arthur Sullivan. (The honor was bestowed after Victoria’s death.) The decorous Sullivan, composer of “Onward Christian Soldiers,” had a 24-year affair with a married American woman (among many liaisons) and died of a heart ailment in1900 at age 58. The “rude” Gilbert died at 75 in 1911 from a heart attack after diving into a lake to save a drowning girl.