The Stratford Festival: Geniuses at Work

The Stratford Festival in Ontario routinely employs the talents of two Theatre geniuses, separated in their endeavors by four centuries. The earlier is, of course, William Shakespeare, around whose plays the Festival was founded and continues to flourish, now in its 67th season. Over the years, I have seen three pairs of star-crossed lovers, two melancholy Danes, a pair of crook’d Kings (one female), multiples of the popular comedies, and Christopher Plummer as both Lear and Prospero.

The modern genius is director-choreographer Donna Feore, whose grasp of musical theatre and ability to communicate its wonders are boundless. Her “Crazy for You” in 2014 was spectacular and last season’s dance-centric “The Music Man” stands out in vivid memory. In 2016, with rarely-granted approval from the Michael Bennett estate, she re-staged “A Chorus Line” on the Festival’s expansive thrust stage with a thrilling result.

Recently I saw four of this season’s twelve productions, two by Shakespeare and two musicals staged by Ms. Feore. An abundance of riches.

No two of Shakespeare’s plays could be any more different than “The Merry Wives of Windsor” is from “Othello.” That one is a rollicking comedy and the other a dark tragedy is just the tip of the comparison. 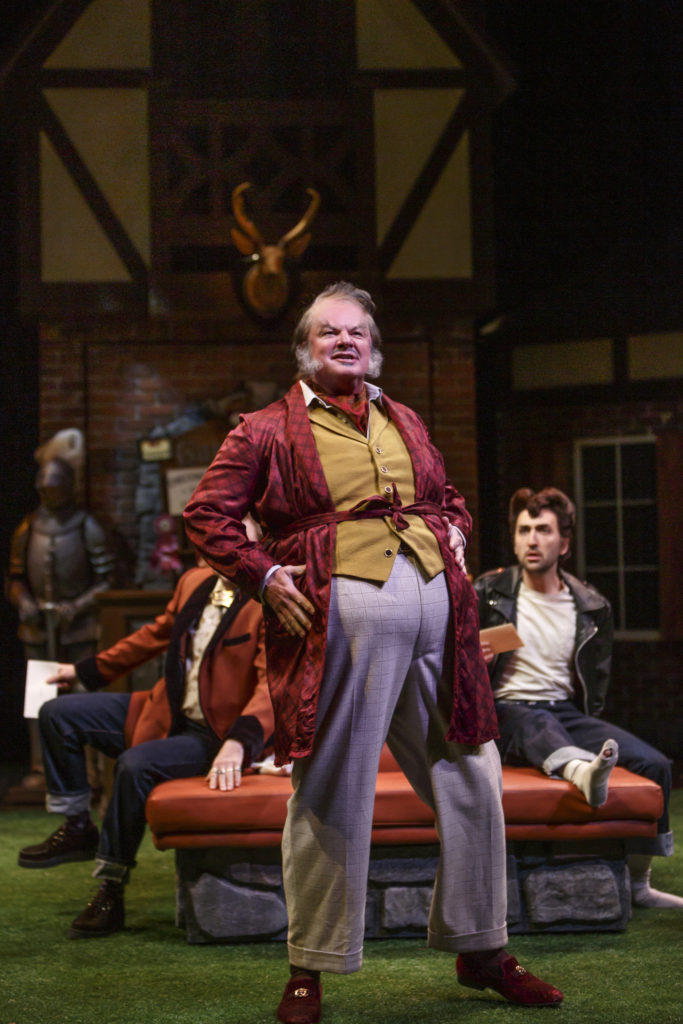 Geraint Wyn Davies as Falstaff in The Merry Wives of Windsor.

In “Merry Wives,” two assertive married women turn the tables on Sir John Falstaff, their bungling would-be suitor, whose indignities and other comic capers lead to the play’s satisfying resolution.

In “Othello,” Iago, a villain for the ages, plots against trusting Othello, leaving both of their compliant wives slain, each by her own husband’s hand. At this play’s gut-wrenching resolution, my companion asked rhetorically, “How can these actors possibly do this again tomorrow?” 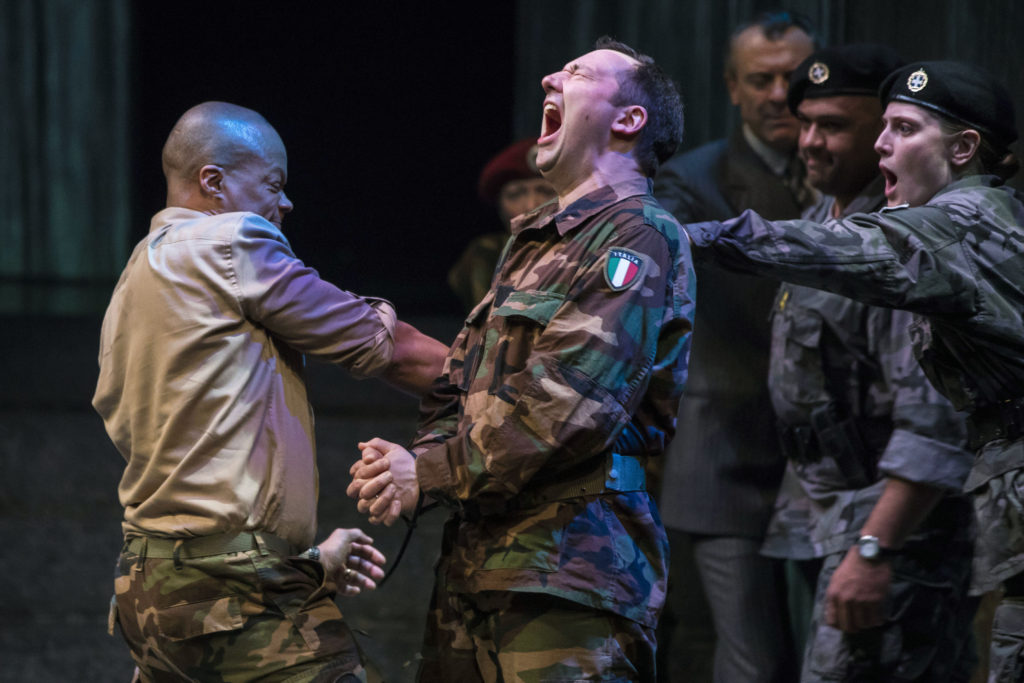 Also distinguishing the two plays from one another is their contrasting forms. “Merry Wives” is 87 percent in prose (the most of all the plays) and 13 percent verse, while “Othello” is near the inverse at 19 percent prose, 81 verse. This factor by itself bespeaks the need for opposing acting styles. The Stratford company masters both. Their “Merry Wives,” driven by Geraint Wyn Davies’ superb Falstaff, moves along at a merry clip, its sharply comic dialogue enhanced with a dose of slapstick.  What makes the dual accomplishment even more remarkable is that fully sixteen actors appear in both plays, including, most notably, Michael Blake, who plays the jealousy-driven Othello and Mr. Page, the trusting of the two “Merry Wives” husbands. If you find two more contrasting Shakespearean roles, let me know. Blake plays them both to perfection. 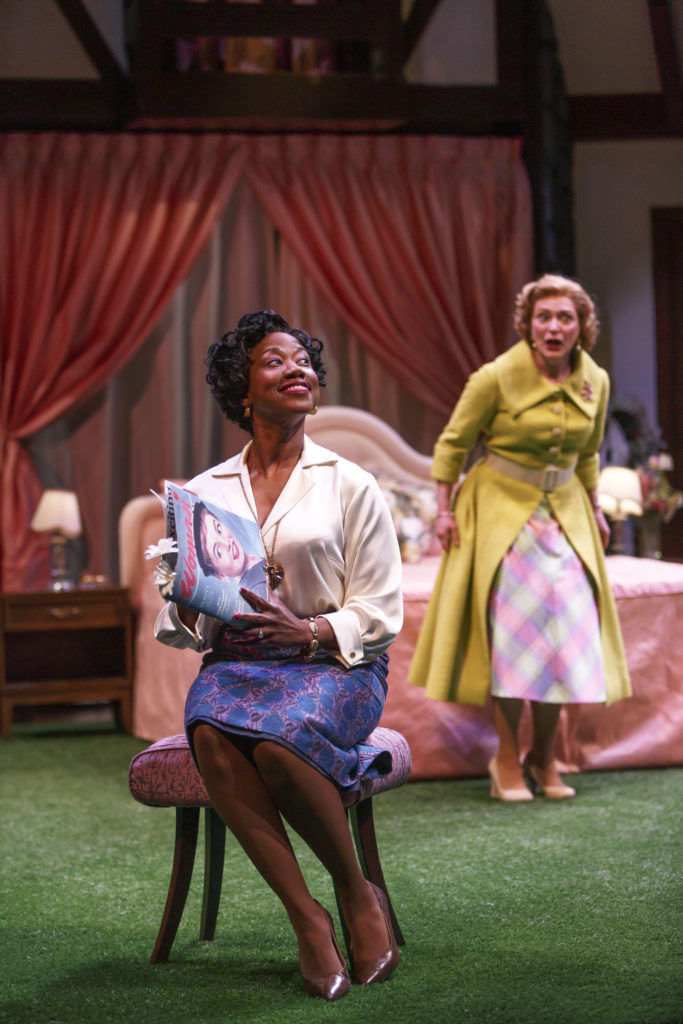 Perhaps to avoid over-playing his sliminess, Gordon S. Miller’s Iago is a straightforward bad guy. The character has significantly more lines than Othello (1100 to 890), much of that difference directly to the audience. His letting us in on his nefarious intentions, usually with a friendly-confidante tone, can have you, perversely, on the verge of siding with him. Miller just tells us straight out, without the character’s quasi-erotic enjoyment of his evil doings. It is director Nigel Shawn Williams’s choice, I guess, but I missed the glint in Iago’s eye. 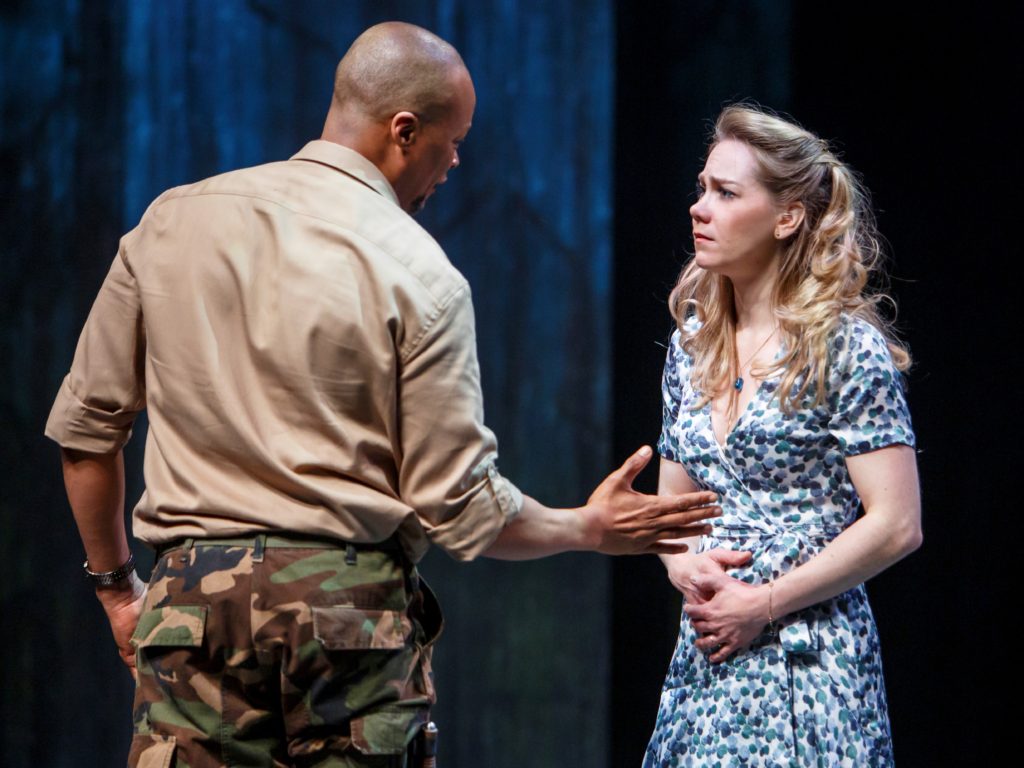 Michael Blake as Othello and Amelia Sargisson as Desdemona

What I did not miss is Desdemona’s usual complacency in the face of her husband’s intention to kill her. Played with emotional depth by Amelia Sargisson, this Desdemona fights like a hellcat, first verbally and then during Othello’s murderous attack, until, significantly bigger and stronger, he finally overpowers her. (There’s only so much you can change.)  It is a shattering enactment and the final scene that follows it, which can feel anti-climactic, is anything but.

None of the Shakespeare actors is in either “Little Shop of Horrors” or “Billy Elliot the Musical,” but if they were, they would probably excel in those contrasting musicals under Ms. Feore’s direction. Her “Little Shop” is an especially lively take on the show. The R & B girl-trio, for example, dances as well as sings their narrative segments, and the few mini-crowd scenes are spirited, but there’s a limit to what even she can do with the piece…an odd choice in the #MeToo era. 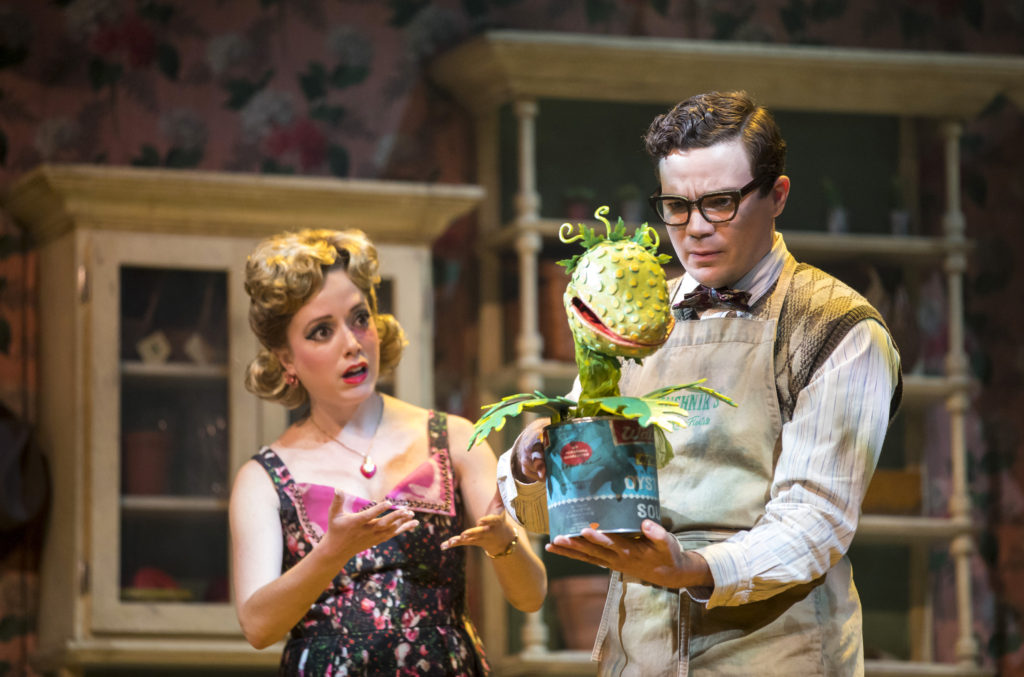 Ostensibly about an insatiable person-eating plant gobbling up all of humanity (think unfettered Greed), the boy-friend-battered heroine Audrey getting nothing but platitudes from her male co-workers is cringeworthy. The abuser does become the plant’s first human meal (post-mortem), but its second course is the kindly florist, intentionally enticed into the plant’s orifice by shop assistant Seymour, whom the proprietor had adopted as his son. 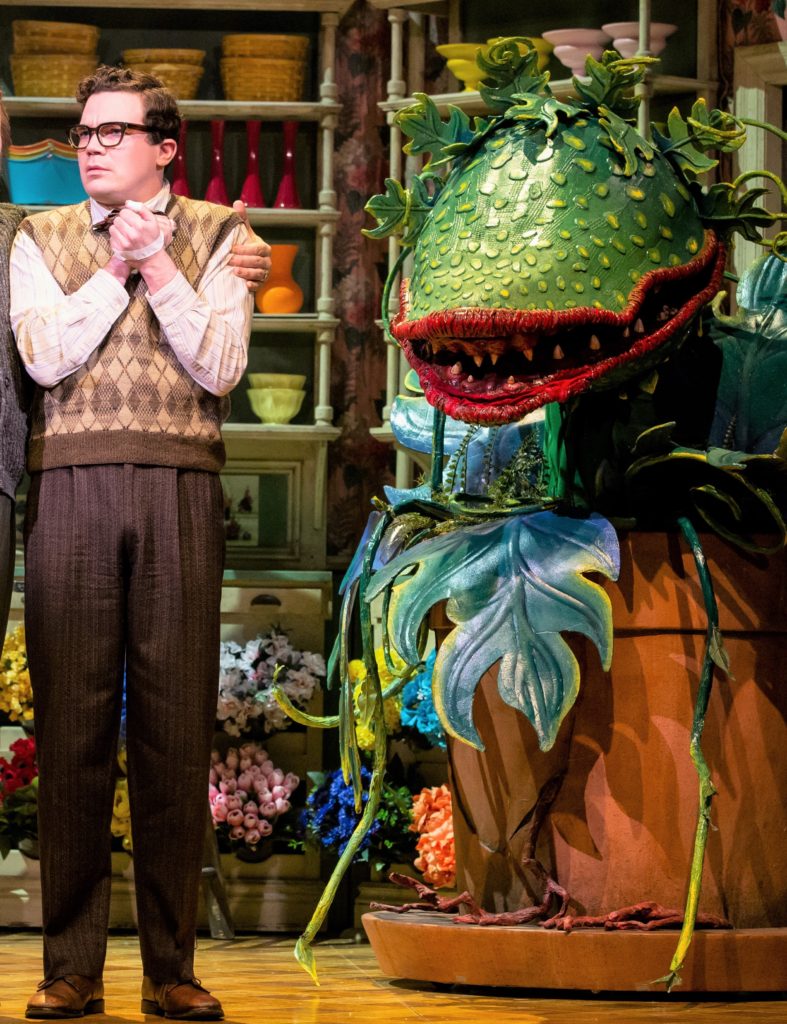 Seymour with Audrey II, grown up (and hungry)

Then it is Audrey’s turn. Chewed upon but lingering, she offers herself up to Audrey II, as the plant is dubbed, to demonstrate her love for Seymour. I get that it’s an allegory, and audiences seem to enjoy it, but for me “Little Shop” is past its sell-by date.

“Billy Elliot the Musical,” on the other hand, is timely, emotionally resonant and exquisitely conceived. After an early number, I thought “It doesn’t get any better than this.” And then it did, in pulse-quickening dance sequences that include energetic tap, classic ballet and every style in between.

Nolen Dubuc (centre) as Billy Elliot with members of the company

In a rarely-achieved fusion, the numbers spring from seemingly incompatible themes: young Billy’s burgeoning interest in the ballet and the economic and political fallout from Britain’s 1984 coal miners’ strike. Against the background of the strike that crushed the British National Union of Mineworkers, Billy’s evolution-in-dance is an uplifting saga.

That the contrasting story lines mesh so well is a tribute to Lee Hall, who adapted his own screenplay (from the 2000 British film), and to Elton John’s exciting musical score. Under Ms. Feore’s direction and choreography, the whole of this “Billy Elliot” exceeds the sum of its parts.

Growing up in a single-dad household (mom had died), eleven-year old Billy stumbles into a young girls’ dance class after his boxing lesson.  Caught up among the girls’ awkward pliés and off-balance pirouettes, he catches the eye of Mrs. Wilkinson, the bored ballet teacher. Against the wishes – even the core values – of his father and brother, Billy continues in the class, eventually earning an audition for Britain’s prestigious Royal Ballet School.

You needn’t have seen the movie to predict the outcome, but getting there is a stirring dramatic and musical journey. Tears of compassion well up for the struggling miners and their families, while the exhilarating dance sequences are heaven-sent…joyous.

Three young dancers rotated in the title role on Broadway, where the show won ten Tony Awards including Best Musical, but it is impossible to imagine a better Billy than Nolen Dubuc, whose rapport with Ms. Feore is palpable. The lad acts the role impeccably and progresses from inept novice to accomplished dancer right before your eyes. There are also nine Ballet Girls, age about five to twelve, with nary an affectation among them. Mrs. Wilkinson is tough, sarcastic and very funny. Hard-bitten as she seems, she becomes something of a surrogate mother to Billy; Blythe Wilson is perfection in the role. (Billy’s real mum appears to him in several poignant scenes.) 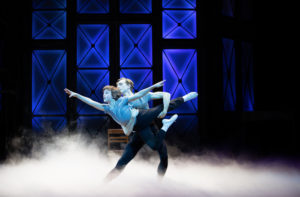 And, oh, the musical numbers: there’s the rousing “Solidarity, ” sung in counterpoint by the robust chorus of grim coppers and miners facing off with the brightly tutu’d Ballet Girls between them; “Expressing Yourself,” a nifty Music Hall song-and-dance of Pride between Billy and his chum Michael (Emerson Gamble) and an exquisite “Swan Lake” fantasy-danced by Billy with his older self (Colton Curtis). “Electricity,” Billy’s ‘eleven o’clock number,’ sets the Festival stage ablaze, and there’s more…much more.

Substituting our current political woes for the British coal miners’ despair and replacing Billy’s passion for the dance with whatever dreams or ambitions you harbor for yourself completes the metaphor.

How fortunate these performers are to be able to perform Donna Feore’s magnificent “Billy Elliot” again tomorrow.

The four shows reviewed here run through October. The season also includes Shakespeare’s “Henry VIII,” the classic comedies “The Front Page” and Noel Coward’s “Private Lives,” and other offerings including family-friendly “The Neverending Story” and Arthur Miller’s “The Crucible.” For complete brochure: 800-567-1600 or visit www.stratfordfestival.ca