A lot of stuff in plays happens offstage. Not just unsavory events, but things that are easier to tell than to show. (The plot of the play reviewed here last week, “Happy Talk,” turns on offstage happenings.) Many such are dictated by logistics – and common sense. You’ll not see Willy Loman’s car crash on stage, nor do you need to in order to gather its meaning.

Shakespeare abounds with examples. In “The Winter’s Tale,” for one, Antigonus’s ursine pursuer presumably eats him…offstage. And, alas, the Midsummer Night consummation between Titania and Bottom takes place after the scene ends.

Nowhere in Shakespeare is this device more critical than in “Macbeth.” The murders of King Duncan and his hapless attendants, the fatal attack on Banquo and (spoiler alert) Macbeth’s ceremonial be-heading all occur out of audience view. 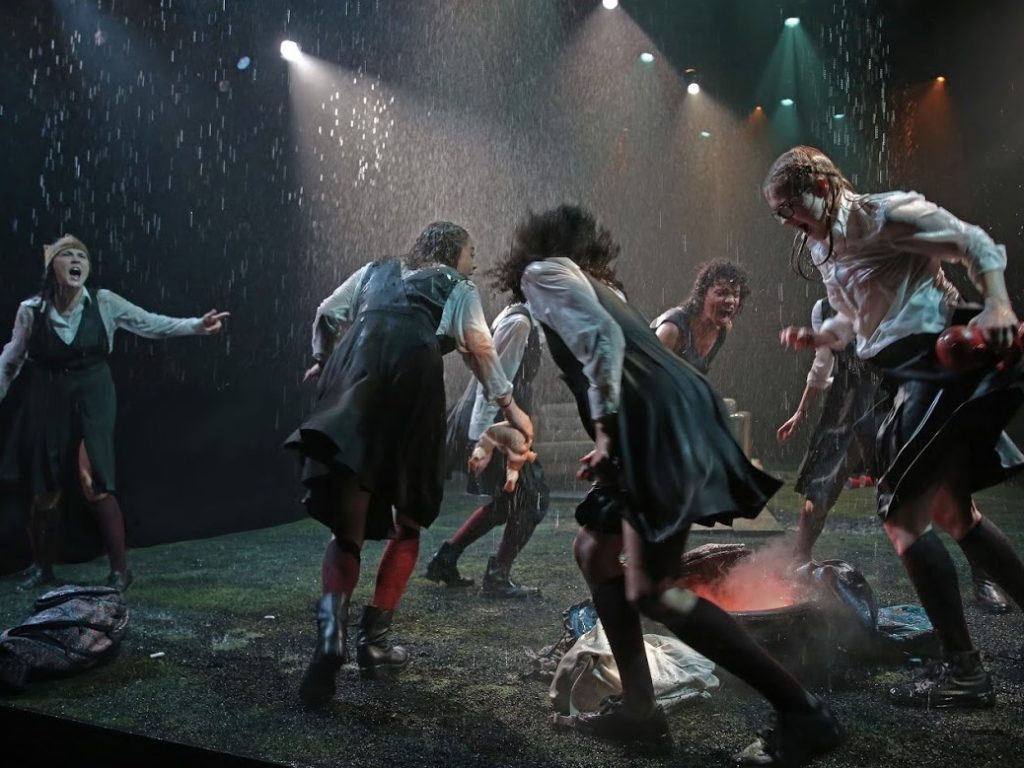 But suppose those atrocities were explicitly (and bloodily) portrayed right before your eyes. Might that detract from the continuity of plot and character development? Maybe you’d even look away? You might think so, but in this time of seemingly perpetual and even live-streamed violence, real-time witnessing of those scenes might enhance one’s immersion in Shakespeare’s unremittingly gruesome tragedy. And so it is that when seven urban high school girls convene in an empty lot to enact the play, averting your eyes is impossible. Adapted and directed by Erica Schmidt “from Shakespeare,” the vivid Red Bull Theater production, re-christened MAC BETH, runs through June 9 at the Lucille Lortel Theatre in the West Village. Lightly edited and compressed into a compact 90 minutes, Shakespeare’s dark tragedy has never felt more complete. 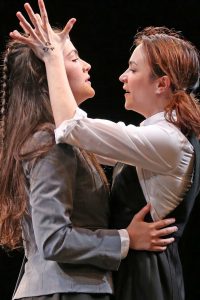 While the cast is all female, the roles are not gender-bent; men are men, women are women, and when the twain meet, sparks fly. Four of the seven play Macbeth (Isabelle Fuhrman), Lady Macbeth (Ismenia Mendes), Banquo (Ayana Workman) and Macduff (Lily Santiago), each with an enviable freedom of expression and movement. They are teens, after all.

The three others have equal stage time as the essential Witches and sundry other characters. Scary enough (and wickedly amusing) as the witches, Annasophia Robb, Sophie Kelly Hendrick and Sharlene Cruz create full-blown characters even as they zip in and out of the roles in a trice.

In their tartan-accented school uniforms, the remarkable septet is as comfortable with Shakespeare’s Early Modern English as they are with their cell phones, which fit into the flow as smoothly as if Master Will himself had owned one. Macbeth’s letter home about the witches’ prophesy, for example, is no less revealing of his Lady’s unbridled ambition for being texted and read on smartphones. 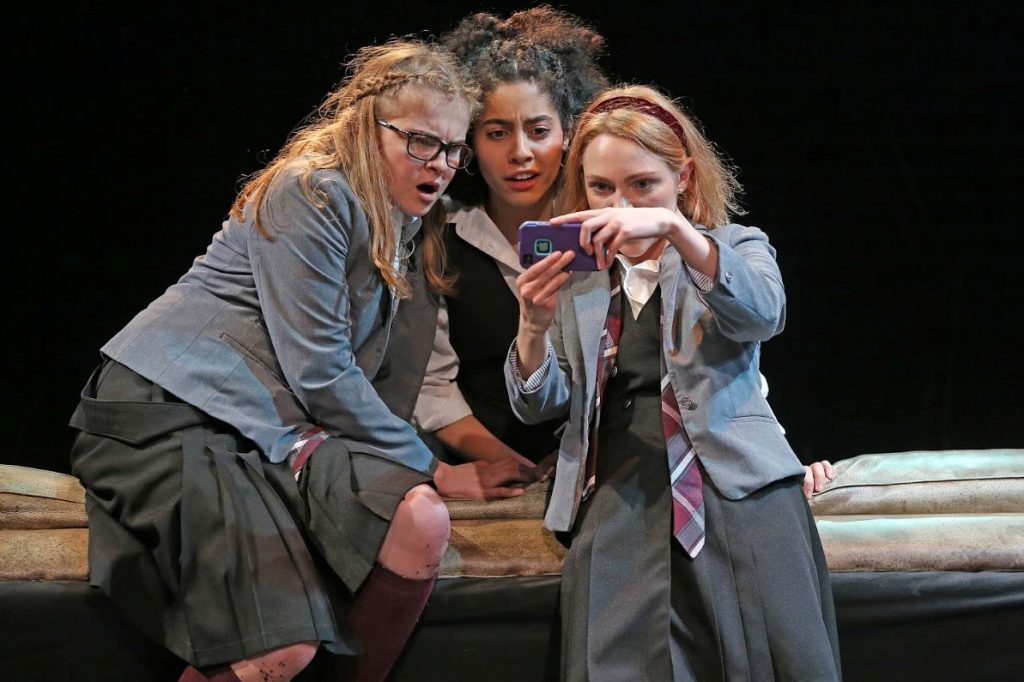 Equally impressive and entertaining, are the uniquely appropriate line readings. Macbeth, upon learning of his elevation, exclaims “I am Thane of Cawdor” with “I made the team!” enthusiasm. And “Is this a dagger I see before me?” is more wonderment than rumination. (Wouldn’t yours be at age 16?) Others are intoned as if for the first time ever.

None of Erica Schmidt’s free-rein direction or deceptively casual touches obscure the play’s underlying seriousness or its tragic elements. Duncan’s Burger King look-alike crown or his cell phone tucked in a knee sock does not diminish the jolt of his multi-stabbings, a la the 2014 Slender Man slaying incident in Wisconsin, which is said to have inspired Schmidt to this project.

At first surprises, soon de rigueur, include the chemistry between Mr. and Mrs. MAC, key to his motivation and never warmer than here. More than one audience member scrubbed imaginary blood off their hands along with Ms. Mendes’s anguished “Out damned spot! Out I say!” sequence. And one of the most difficult scenes in all of stage literature, Macduff’s learning of his family’s slaughter, is stunningly conjured. (Recalling Ms. Santiago’s “All my pretty ones? Did you say all?” wells me up.) 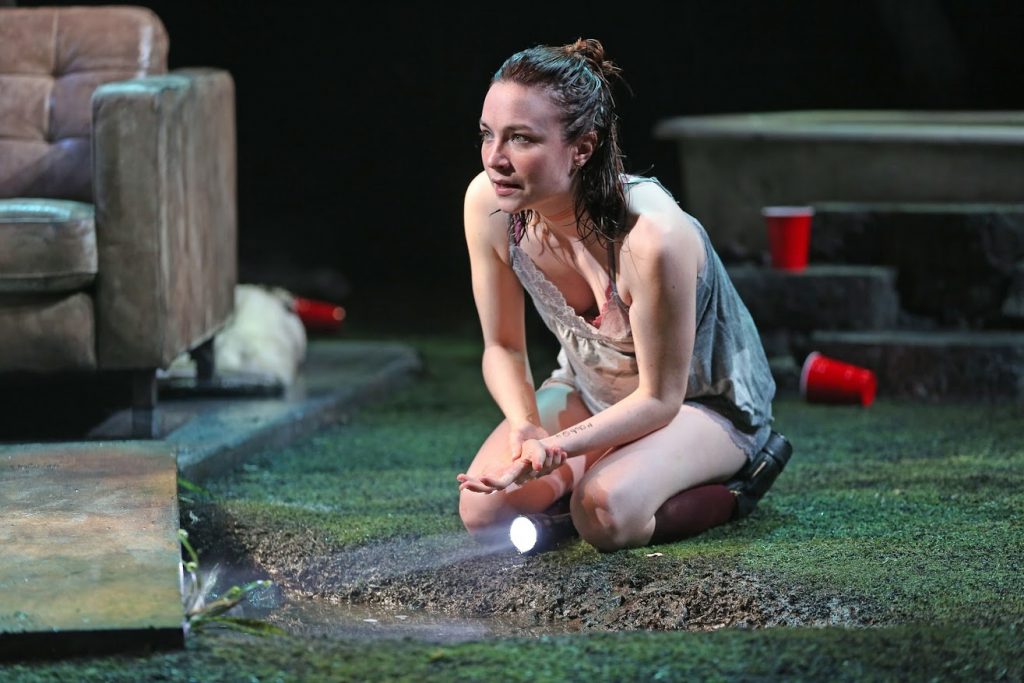 Watching Shakespeare’s “Macbeth” from a teen point of view is like experiencing the play from the inside. As many times as I’ve seen it, it never occurred to me that the witches would toss more – a lot more – than eye of newt into their brew, or that Banquo’s ghost might go all Beetlejuice-y on Macbeth at the dinner party. And who knew it took that long to sever a head from a body?

This may not be your college professor’s “Macbeth,” but you’ll be, like, real glad if you make it yours.

THE CURSE OF THE SCOTTISH PLAY

In 1936, Orson Welles directed an all-black production of “Macbeth” in Harlem. At the time, it was unheard of for black actors to play the classics – so-called “white plays.” Hundreds of African-American actors auditioned, and the production was a huge success. Only one New York critic gave “Macbeth” a negative review. Percy Hammond of the Herald Tribune panned it outright.

Welles had found a group of African drummers, stranded in the States during the Depression, to provide voodoo-style music for the play. The drummers, displeased by Hammond’s review, cast an evil-spirit spell on the critic. “Percy Hammond, he is bad man,” they chanted. A week later, Percy Hammond contracted pneumonia and died.

You can’t make it up.