Do you read a newspaper? Watch cable news? Discuss politics and world affairs with co-workers or friends (or former ones)? If you answered yes to any of the above, you could surely use an entertainment that will, in parts, tickle your visual funny bone, please your ear with lively tunes, bring you to gentle tears and create some mild concern before leaving you with a warm glow for people you’d encountered a scant two hours earlier.

What I have described – and do indeed prescribe – is the musical version of the 1993 movie “Benny & Joon,” on stage now through May 5 in its east coast premiere at Paper Mill Playhouse in Millburn New Jersey.  In this age of weighty messages and showy excess, “Benny & Joon” is a refreshing anti-blockbuster. 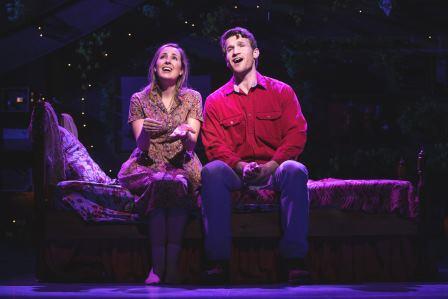 Fans of the movie rest easy: the sweet-tempered plot is intact. Auto-repair shop owner Benny (Claybourne Elder) has been looking after his “high-functioning schizophrenic” sister Joon (Hannah Elless) ever since their parents died years before. Sitting in for her brother at the shop’s regular poker game, where the stakes are chores and the like, Joon wins by losing, ending up with custody of an odd young fellow named Sam (Bryce Pinkham), who sees himself as the reincarnation of Buster Keaton.

Sam, whose mental rolodex of movie scenes is virtually unlimited, becomes essential to Benny and Joon’s household. He cleans (much to Joon’s consternation), makes flatiron grilled cheese sandwiches (on the rayon setting), becomes Joon’s de facto guardian and, soon enough, to no one’s surprise, her significant other. Benny’s tentative relationship with coffee-shop waitress Ruthie (Tatiana Wechsler) is also a forgone conclusion, but the dual predictability does not dilute the charm of the leads-up to the pairings-up.

Despite its title, the play, as was the movie, is about Joon and Sam. As essential as Benny is to the story, the character fades in significance as the Joon/Sam connection develops. As played here by Ms. Elless and Mr. Pinkham, Joon and Sam are as perfectly matched a set of misfits as ever existed. If they don’t melt your heart you don’t have one.

The score by Nolan Gasser (music) and Mindi Dickstein (lyrics) is of a piece with Kirsten Guenther’s book. Even the song titles reflect the gentle tone of the show: “Saving a Life,” “Happy,” “Wonder” and “I Can Help” are a few. Director Jack Cummings III, choreographer Scott Rink and music director/conductor J. Oconer Navarro take those fragile cues and build on them.  Elder’s and Wechsler’s excellent solos, “One Good Day” and “You Meet a Man,” respectively, nudge Benny and Ruthie toward their final clinch. 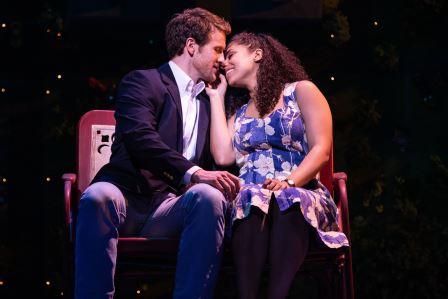 Ms. Elless plays Joon without condescension – as a woman with girlish tendencies, not as a stunted adult. Charming throughout, even in a frumpy dress (for a costuming reason), she exudes innocence, but hardly ignorance (her vocabulary includes “consummated”). There’s even a trace of the savant in her makeup. (Raisins really are humiliated grapes if you think about it.) Elless’s vocals are perfectly in character: “Happy” is just that, and “Yes Or No” is assertive…at last. The title song duet with Elder cements the sibling relationship. 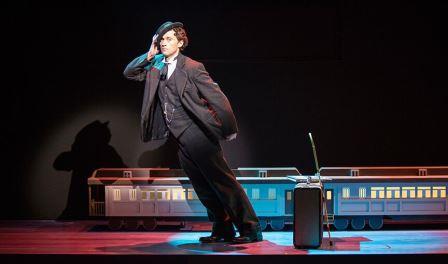 Leaning into the breeze…

I have heard that the movie’s Sam, Johnny Depp, accomplished his Central Park Buster Keaton routine in one take. That may or may not be true, but Pinkham gets no mulligans on the Paper Mill stage. Withstanding an imaginary windstorm, tossing platters behind his back, making frippery with his ever-present hat – all and more are accomplished in real time. Sure, you’ve seen those tricks performed with more expertise, but that’s the point. Sam’s not a pro, but Pinkham is, and his unassuming immersion into the persona is infectious. Besides Keaton, he does E.T., De Niro, Kirk Douglas (Joon pronounces Van Gogh correctly, bless her), Olivier’s Heathcliff, and more. He also performs the “Grilled Cheese Ballet” and creates a counter-top tap dance with a pair of shoe trees.  C’mon, tell me you won’t pay to see that!

Every year at this time, 59E59 Theatre (its address) plays host to Brits Off Broadway, the critically acclaimed festival that showcases some of the UK’s most innovative and provocative independent works for the stage. Running through June 30, this year’s program includes a dozen plays in the venue’s three theater spaces.

The one I’ve seen so far, “Killing Time,” is the study of an elderly cellist facing her death from an unstated but fatal cause. Not without some humor, the fascinating 90-minute piece is punctuated by occasional cello riffs (if Bach can be riffed), and cryptic conversations with a younger social worker from the National Health Service.

The women’s attitudes toward death evolve as their conversations become more and more personal – revealing what they want from one another. Actress Brigit Forsyth really is an accomplished cellist, and Zoe Mills, who plays the social worker, is also the play’s author. Directed by Anthony Eden (not Britain’s same-name former Prime Minister, who died in 1977), the two women play off and against each other in an increasingly mysterious dramatic pas de deux.

One does not want to risk spoilers by revealing the particulars, but consider that the title “Killing Time” has two distinctly different connotations depending upon which word you stress. Think on that for a bit…

For Brits schedule and tickets ($25-$70): www.britsoffbroadway.com