[In a departure from my usual content, below is a (lightly edited) re-print of a feature that appeared in The Palm Beach Post on April 1.]

After surgery for brain tumor, singer pursues her passion. 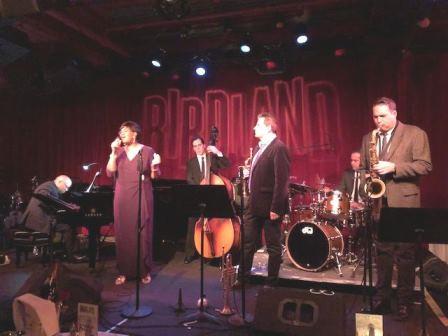 Yvette Norwood-Tiger with the band at Birdland

By Philip Dorian
Special to The Palm Beach Post

To paraphrase the question about directions to New York City landmarks: “How do you get to Birdland? Practice, man, practice.”  Of course it takes practice, but it also takes talent, determination and faith, all of which Palm Beach County songbird Yvette Norwood-Tiger possesses in abundance, as well as a little bit of luck.

The famous Jazz Corner off the World is no longer at Broadway and 52nd Street, where it stood – and swung – from 1949 to ’65. But after a twenty-year hiatus and a decade uptown on 105th Street, Birdland’s new home on West 44th Street in Manhattan’s Hell’s Kitchen is once again acclaimed as the go-to Mecca for jazz artists and fans.

An engagement – gig, that is – at Birdland goes right to the top of any musician’s resume; on March 7 it landed on Norwood-Tiger’s. Her Birdland debut was a smashing success. It wasn’t a smooth journey (it rarely is), but sidetracks and setbacks that could have stalled her career instead spurred her on.

Norwood-Tiger was born and raised in Detroit, where her parents played drums and guitar in a church orchestra. Her early interests, however, were in the fields of chemical and mechanical engineering, which she studied at Macomb Community College, eventually landing a Mechanical Engineering Technician job with the federal government. Ah, but she had always sung along the way for herself and in the church choir.

Her life changed in 1998 when she met Steve Tiger during a Caribbean cruise vacation. A long-distance relationship led to their 2001 Detroit wedding and their move to Long Branch, New Jersey, where Steve had an established Information Technology practice.

There, in open-mic venues that dot the Jersey Shore, Norwood-Tiger’s singing became more than a passing interest, first at Karaoke nights and occasionally sitting in with house bands. Finally, on a family cruise in 2003, she was coaxed into singing with the onboard pianist.

“It was an out-of-body experience,” she told me, that led to a series of professional bookings, beginning at an Asbury Park N.J. night spot in 2005.

The rest might have been history, as they say, but not quite. The couple moved to Wellington, Florida in 2010 (to escape the cold), and Norwood-Tiger booked appearances at area jazz clubs, including Arts Garage in Delray Beach and Double Roads Tavern in Jupiter. All was going smoothly until fate struck a bitter blow. In 2012, after complaining of persistent headaches, she was diagnosed with a brain tumor. 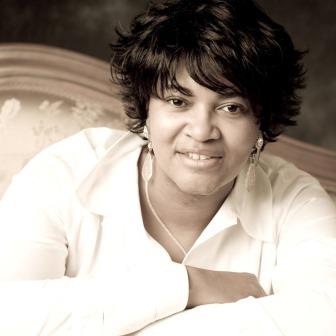 Told that she might not sing again (or worse), she emerged from brain surgery and radiation with more determination than ever, making her post-surgery debut at Rudy’s in Lake Worth in April 2014. Her recovery and subsequent career progress, she says, represented “a spiritual revelation,” which she honors with her own lyrics to jazz pianist and composer Horace Silver’s reverent “A Song for My Father.”

And now the rest might be history, as they say. But not without a stroke of what Norwood-Tiger labels divine intervention.

Another Florida jazz singer, Pat Dyer, had seen Yvette perform at Double Roads. “I admired her talent,” Dyer said, “and we crossed paths in jazz circles.” On Facebook last year, Dyer spotted Norwood-Tiger’s posts about a cruise to Havana and, interested for herself, asked to meet. 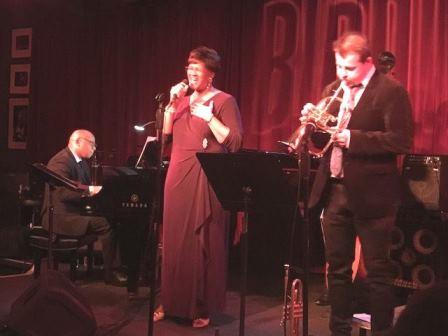 With Donnie Harrell on piano and trumpeter Alan Chaubert

While discussing their musical careers, Norwood-Tiger mentioned that singing at Birdland was high on her wishlist. Little did she know that Dyer’s daughter Lauren is the house manager at, yes, Birdland.

As all performers know, it’s not enough just to know someone, but it helps, and on Dyer’s recommendation, her daughter arranged a virtual audition, and Norwood-Tiger was booked.

Her 75-minute set, “A World Tour of Jazz,” includes a dozen songs. Backed by top-notch sidemen, she swung through Cole Porter’s “You’d Be So Nice to Come Home To”; “Green Dolphin Street,” originally a Polish tune (who knew?); “La Vie En Rose” and songs of Brazilian, South African and other origins, including, appropriately, the British George Shearing’s “Lullaby of Birdland.”

Even before Birdland, with jazz festival bookings scarce, Norwood-Tiger had decided to start her own. She founded the Palm Beach International Jazz Festival, which premiered April 13 with two three-band concerts at the Kravis Center. Broadway and cabaret star Avery Sommers headlined the 2PM show; the 7:30 session featured renowned Cuban pianist Marlow Rosado and, reprising her Birdland set, Yvette herself.

After her 2014 brain surgery, Norwood-Tiger was advised to “Get your affairs in order.” So she did just that, bringing her musical affairs to Birdland on March 7 and to West Palm’s Kravis Center in mid-April. 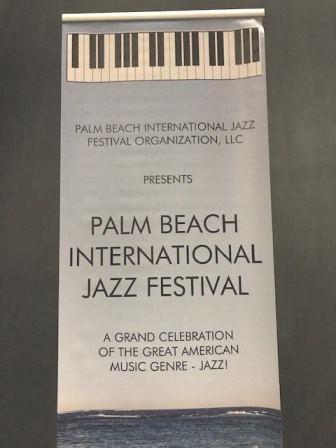 I attended both sessions on April 13. Yvette’s story is inspirational. With plans already underway for next year’s Second Annual Palm Beach International Jazz Festival, she is being recognized as one of Palm Beach County’s most important Music Industry entrepeneurs. Besides which, she sings. And all that jazz…